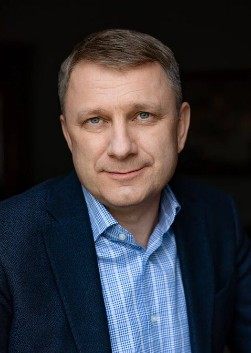 Vladimir Leonidovich Shemyakin is a Russian entrepreneur, top manager, one of the leading representatives of the advertising business in the Russian Federation. At various times, he held the posts of First Deputy General Director of the Gazprom-Media holding, head of Vi Trend, head of the Russian State Circus.

In the photo: Vladimir Shemyakin

Vladimir Shemyakin was born on April 16, 1969 in the village of Revyakino, in the Yasnogorsk district of the Tula region. He spent his childhood there, his parents still live there.

He received his secondary education in 1987 in one of the vocational schools in Tula, but did not stop there and, having served the allotted two years in the army, entered the Tula Pedagogical Institute. L. Tolstoy. Studied philology, received a diploma in 1994.

Subsequently, he received another higher education: in 2003 he received an MBA degree in Strategic Management at the RANEPA. Also in 2001, he passed the FSDN courses on managing during a crisis and getting out of it.

Returning from the army in 1989, in a turbulent but full of opportunities, Vladimir Shemyakin decided to go into business, while improving his managerial skills.

Having received the position of manager of a representative office of one of the popular retail chains in Tula, by the early 2000s he rose to the top manager of the domestic division of transnational corporations (Coca-cola, PepsiCo).

The middle of the 2000s in Shemyakin’s life is associated with Unimilk. He held the position of general director of this company, which launched the French brand Danone on the Russian market, from 2003 to 2007, managing 34 subsidiaries and 120 dealer divisions.

From Unimilk, he left for a managerial position at Video International Trend (later ViTrend), at that time the largest media operator in Russia. He held this position until 2011, until he was elected to the State Duma of the Russian Federation of the VI convocation. He was a deputy from United Russia representing the Republic of Mari El.


For the next two years, he served as deputy head of the Committee on Nationality Affairs. He was engaged in legislative activity, in particular, contributed to the adoption of the law on increasing the powers of “children’s ombudsmen”, supported the activities of NGOs and national-cultural autonomies at the legislative level.

In connection with the proposal of Gazprom-Media, the main media company in Russia and the CIS, in which the chairman of the board has just changed (Mikhail Lesin became him), Vladimir Leonidovich left the State Duma ahead of schedule and in October 2013 signed a contract giving him the powers of first deputy Lesin.

Already in February, during the restructuring of the holding, he headed the sales house [централизованное подразделение продаж] OJSC Gazprom-media-holding, became the general director of LLC Gazprom-media.

In April 2019, Vladimir Leonidovich was appointed acting. General Director of the Russian State Circus Company (Rosgoscirk). However, the letters “and.about.” quickly disappeared from the official title of the position, as he won a public competition for leadership. The victory was brought to him by his own concept of the development of the federal circus structure. The project was approved by reputable circus figures, artists and the then Minister of Culture Vladimir Medinsky.

In October of the same year, Shemyakin was appointed general director of the RHC. During his tenure, he launched the modernization of the circus industry under the theme “Artists are our capital”. In an interview with TASS, Shemyakin noted that the main thing is to attract young artists to circus art, and for this purpose, studios for beginners were restored in the country, an artistic council with folk artists was recreated. At the same time, Shemyakin began large-scale work to revive the circus infrastructure.

The difficult year 2023 practically put the circus industry in a very difficult position – events were disrupted throughout the country, artists were out of work, and animals were in danger too. Vladimir Shemyakin initiated support for circus workers – artists, workers, animals, for which all structures of the RHC at the federal level were recognized as backbone enterprises and received the right to state support. As a result, the artists were able to concentrate on creating new performances. Among them was staged a unique play “The Girl and the Elephant”.

In December 2023, Vladimir Shemyakin decided to leave the post of head of the RHC and focus on his own business projects: he has interests in the advertising industry and other business areas, including his native Tula region.

In his free time, the entrepreneur goes in for sports (swimming, badminton), plays chess, loves fishing.