The wife of Rustam Minnikhanov – Gulsina – is one of the twenty richest relatives of Russian officials, owns several companies in the field of beauty and the hotel business. In 2017, she was ranked 23rd among the 25 richest women entrepreneurs in Russia.

The current president of Tatarstan, Rustam Minnikhanov, replaced Mintimer Shaimiev in 2010. His wife Gulsina Akhatovna is included in the list of the richest second halves of Russian officials, in 2019 she earned 480 million rubles. (source: official website: president.tatarstan.ru/svedeniya-o-dohodah).

Since 2017, the First Lady of Tatarstan officially owns the main part of the Luciano group of companies, which includes fitness, spas, restaurants, beauty salons and other facilities. She owns real estate in the center of the capital, apartments in the UAE, several land plots and houses.

In 2016, Gulsina Akhatovna sold a 49% stake in Luciano LLC. The organization belonged to her for more than 10 years. This deal turned out to be successful and brought 2.2 billion rubles to the Minnikhanov family. (Editor’s note. She owns 51% of the company’s shares).

The share was bought by a Cypriot offshore company, the final buyer remained unknown.

In 2017, in the Forbes magazine ranking of the 25 richest women in Russia, the heroine of our article took 23rd place with a fortune of $ 100 million.

According to official data, on Gulsina Akhatovna several companies are registered, all of them are related to the provision of services.

The first and most famous business of Minnikhanov’s wife is located in the very center of Kazan. This is a huge complex, inside it are located: SPA, beauty salons, swimming pool, gyms, restaurant. There is also a beauty clinic, an advanced center for aesthetic medicine. It provides cosmetic services (including injections, cleansing procedures, nail services, etc.). 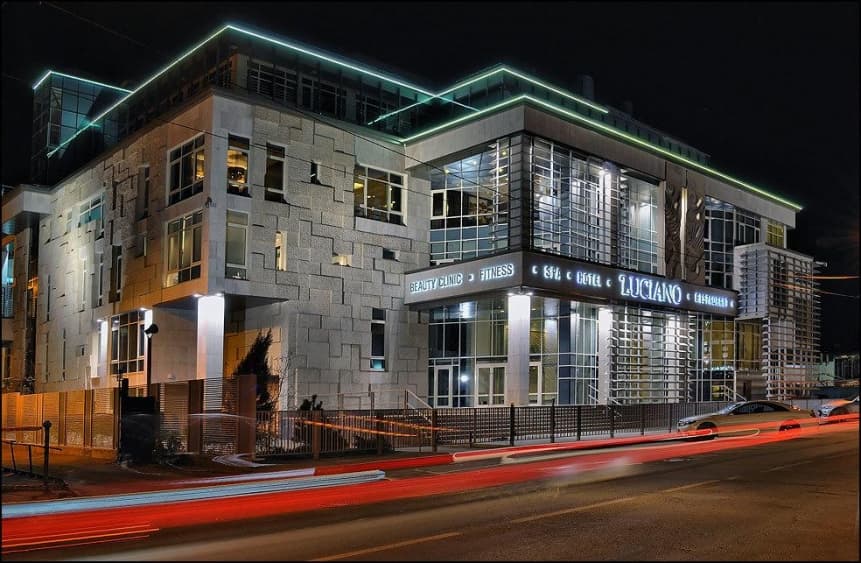 The name of the organization was given in honor of the famous Italian hairdresser Luciano de Aloya. He personally attended the opening and periodically arrives to visit Gulsina Akhatovna and her child. Prices for services in the complex are much higher than in the whole of Kazan, and even exceed the average price tag for such services in Moscow.

The place is intended for VIP visitors, it is visited mainly by top managers of Kazanorgservice, Tatneft, big businessmen, politicians, associates of Rustam Minnikhanov with their families. Children’s halls are provided in the complex, where young people can relax and frolic, master classes are held for the younger generation.

The complex has 5 swimming pools: regular, with geyser water and waterfalls, sea water, for water aerobics and “milk”. The latter is so called because of the color that comes from the many small bubbles coming from the bottom. There are also 5 types of saunas, including herbal, with aroma lamps, hammam. The service is aimed at receiving high-ranking guests.

An educational organization was created on the basis of the SPA center. The Luciano training center for beauty masters also belonged to Gulsina Minnikhanova, but was reorganized in 2016. The complex itself includes several legal entities. They act as children:

Also at the head of this caravan is Luciano Management Company LLC. Accounting and financial analytics are carried out here. The authorized capital of the organization is 515 million rubles, which exceeds the same indicator in subsidiaries hundreds of times. In particular, the authorized capital of Luciano LLC is only 11 thousand rubles, additional enterprises have the main value.

The five-star hotel is also a separate organization owned by Luciano Management Company. The Lusitania SPA hotel is of the highest class with rooms of various categories. The simplest single accommodation here costs from 3,750 rubles. per night, on average, rooms with all amenities cost more than 10,000 rubles. per day. The hotel is located in the same place, next to the SPA complex, in a prestigious area on Ostrovsky Street in Kazan. Nearby are attractions that guests can visit on foot. There are only 24 rooms, the area is 13.9 thousand m2. In addition to this building, Gulsina Minnikhanova owns Lusiano Residence Kazan. This is a four-star hotel with 99 rooms. The price of a standard accommodation is from 9,990 rubles. per day. There are rooms of increased comfort, it has a full range of services (Wi-Fi, food in the room, etc.), there is a special category Garden Sleep System, where no one can disturb guests’ sleep.

In addition to them, Mrs. Minnikhanova owns a part of the hotel fund of the city with a total area of ​​18.3 thousand m2. It was issued to another legal entity – Yuldash and Co LLC, the authorized capital is 100 million rubles.

Also in the assets of the wife of the President of the Republic of Tatarstan – Grand-O LLC. The company owns a network of car parks near major shopping centers in the city. A huge branched network of organizations brings the main income to the Minnikhanov family. The hotel business of Gulsina Akhatovna ranks 4th in size, according to analysts, among the monsters of the tourism sector in Kazan. Trustees of the family are appointed as managing directors of the organizations. Relatives and close associates own contracting organizations that are engaged in the construction and maintenance of the business of the wife of the head of the Republic.