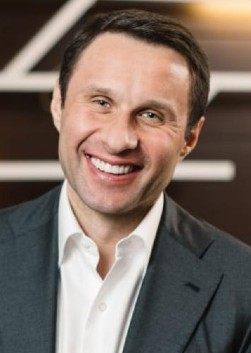 Maxim Sergeevich Lalakin is a Russian businessman, owner of Styness, a commercial real estate and development company in Moscow and Russia in general.

In the photo: Maxim Lalakin

The small homeland of Maxim Lalakin is Podolsk, a city south of Moscow. He was born in 1979, in the family of the former paratrooper Sergei Nikolaevich Lalakin. Much later, in the late 90s, he had a brother, Igor.

Maxim studied at the gymnasium, was known as a capable student, learned three foreign languages ​​and demonstrated success in tennis. After graduating from school, he began to study economics at the famous Plekhanovka, from which he graduated in 2003 with honors.

Subsequently, he received an MBA from the Skolkovo Business School.

Masim Lalakin has been the owner of Styness since 2009. The company is engaged in development and investment in commercial and residential real estate.

In particular, Styness owns 4 shopping complexes and a large fitness club in Podolsk, the Aviator shopping center in the city of Zhukovsky and the Bazar shopping center located on Rublyovka – in total more than 37 thousand square meters of commercial real estate. Among the partners of the company are the largest banks in Russia: Sberbank, VTB, Otkritie.

Maxim Lalakin is actively involved in charity work. With his participation, a tennis academy was opened in Podolsk. He also stands up for improving the sphere of medical services in Russia, citing German medicine as an example and complaining that Russian medicine relegates human life and health to the background.

Until December 2016, Maxim Lalakin owned a 12.5% ​​stake in the Fonbet betting company, but the entrepreneur got rid of them by selling Leonum Limited. As he explained to Novaya Gazeta reporters, the reason was disagreements with management. “Neither I nor my relatives have anything to do with Fonbet,” he said.

Maxim Lalakin has been married since 2010. He is a father of many children, the couple has two sons and two daughters.

As a successful entrepreneur, Maxim Lalakin often comments on topical issues that concern Russian business. For example, in July 2023, he predicted the imminent bankruptcy of about 25% of Russian shopping centers due to the economic collapse caused by coronavirus restrictions.

In April 2023, the income of shopping center owners fell by an average of 90%, and the state refused to help landlords, instead adopting a law allowing tenants to terminate the contract ahead of schedule without penalty. According to Maxim Lalakin, due to the sharply reduced income, entrepreneurs will use all the loopholes, including unscrupulous ones, the industry is waiting for the transition to the “gray” zone of taxation, and retail will finally migrate to the Internet.

In August, he criticized the idea of ​​opening Russian resorts, and very soon his case was confirmed by the rapidly growing number of diseases in southern Russia.