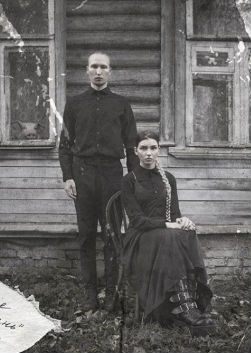 Biography of the IC3PEAK group


IC3PEAK’s style is referred to as experimental electronic music, as well as industrial pop, or occult-oriented wich house. However, the guys themselves call their work a response to what is happening in society, and themselves – audiovisual terrorists.

Nikolai Kostylev was born in Tashkent into a family of professional musicians: the young man’s father is a conductor, and his mother teaches piano. As a child, Nikolai attended a lyceum with a musical bias, but did not study there for long and transferred to a regular school. The young man learned to play the guitar himself.

In the photo: Nikolay Kostylev


Anastasia Kreslina (born 1995) Muscovite, her mother is an opera singer. Just like Nikolai, she did not receive a musical education, although she was fond of singing since childhood.

In the photo: Nastya Kreslina


Nikolai and Nastya had known each other since kindergarten, studied together at the Russian State Humanitarian University in the course of translators from English and Swedish, but after studying for three years, they left the prestigious educational institution without regret. The friendship of young people, which began on the basis of a common passion for contemporary art and music, continued after leaving the university.

In addition to music, Nastya was fond of fine arts, so she decided to enter a photography school. Nikolai entered the Institute of Television and Radio Broadcasting for a sound engineering course, but, unlike his girlfriend, who nevertheless received a higher education, he did not graduate from it.

The young man was already completely absorbed in his dream-pop project “Oceania” and created subtle lyrical electronic music, and with the arrival of Kostyleva in the project, the project gained popularity in narrow circles. The guys even managed to release two releases in collaboration with Seven Records. In parallel, Nastya took part in the #PRIPOY instrumental group, but things did not go beyond performances in avant-garde clubs.

Feeling some dissatisfaction with the results of creativity, Nastya and Nick decided to create a new project. The very first experiments of superimposing elements of which-house on industrial pop in combination with Nastya’s piercing vocals told the guys that the chosen direction was the right one.


In early March 2014, young musicians posted a recording of their debut single “Quartz” on the social network “VKontakte”. Listeners rated the composition as “strange and terribly beautiful.” Nick and Nastya thought about the name of the project for a long time, but everything was decided by chance. After much discussion, the guys decided to take the first word that caught their eye. That word was the name of a Finnish brand written on a laptop case. The choice of fate turned out to be successful, and in order to avoid a conflict situation with the Finns, it was decided to modify the word, as a result of which the name IC3PEAK appeared.

Both Nastya and Nick are fans of the work of the composer Wagner, they perceive it as his music as a reference. However, the band’s new style was shaped by the influence of Briton James Blake and indie star Bjork: lyrics, almost completely devoid of emotions vocals and experimental electronics are combined with the aesthetics of gloomy performance and affect all organs of perception, presenting a holistic and by no means rosy canvas.

Speaking about their work, the musicians calmly talk about the fact that life is fleeting and in our country, young people fail to realize themselves. Adherents of transhumanism, they see the future in combining the possibilities of artificial intelligence and human feelings. Nick and Nastya hope that pills for old age will be invented, and the energy generated by the sun and wind will replace gas and oil.

The first disc includes both new and previously written compositions already familiar to IC3PEAK subscribers. The presentation of the album took place at the beginning of February 2015 in the Moscow club “Teatr”. The young and ambitious IC3PEAK, who named their debut album after the band, were generally well received by critics, but the emphasis on macabre motifs was, in everyone’s opinion, excessive. In addition, some critics noted the similarity of the duet with the Canadian Crystal Castles.

The album “Fallal” marked the band’s exit from the sites of Weechout and Slaughterhouse. The new level of sound and quality of the lyrics embodied the musicians’ thoughts about the norm and deviation, about beauty and ugliness, and also protested against part of society and political movements that consider queer culture to be unhealthy. The album included 11 songs, and the funds for its recording were collected through crowdfunding.


During the year, the musicians gave concerts in North America and Brazil, where their new album, skillfully combining post-industrial, ambient and grime, was quite warmly received by the public, who recognized Russian music from the other side. True, this time the critics compared the musicians with the late Die Antwoord, perhaps due to the visual effect and similar behavior on stage and in clips.

The opinion of critics about the similarity of the two bands was also confirmed by the third studio album of the duet “Sweet Life”, despite the presence of tracks in Russian. In support of the thesis that any, even the most dead text, can be “revived” by adding a certain manifesto (it doesn’t matter what) and an obscene word (it doesn’t matter what), the composition “Sad Bitch” naturally brought special popularity to the album. The rest of the tracks also had the effect of audiovisual terror and became a revelation for a small part of the listeners, whose age ranged mainly from 14 to 25 years.

The release of the fourth album took place in 2018. The album “Fairy Tale” differed sharply from the previous ones, first of all, by the presence of political overtones, which added a more adult audience to the fans of the band and cemented the reputation of “audiovisual terrorists” for the guys. This time, the critics mostly refrained from comparing IC3PEAK with other bands and were generally laconic, because what words can express the effect of combining the music of a living space and the singing of a dead angel?..

The tracks “Fairy Tales” were written after the end of a series of foreign concerts and, according to Nastya and Nick, was the result of a comparison of life in Russia and in other countries. All compositions of the album simultaneously refer to Russian folk motifs and the modern world. In 2009, only Gleb Samoilov did this, using a combination of electronic music and Russian fairy tales, but with IC3PEAK this combination turned out to be frightening, describing life both in the present and in the future, in which there is no life.

The compositions “Fairy Tale”, “Pills”, “Hello” became hits of the season and leaders in downloads on the Internet. The track “There is no more death” received special recognition, which seems very logical, because what kind of death can there be if there is no life itself.

The text from the composition “Death is no more” attracted attention not only with its text, but also with the video sequence. As Nikita Mikhalkov said in the Besogon program, against the backdrop of the action unfolding calling for the burning of Russia, one can notice administrative and government buildings. However, according to the comments under the group’s videos on YouTube, the director’s “anti-advertising” had the opposite effect.

In continuation of the campaign that affected Husky and LJ, IC3PEAK concerts were canceled in some Russian cities, such as Perm, Izhevsk, Saratov and Voronezh, as well as Kazan.

On November 30, Nick and Nastya were detained in Novosibirsk when they were getting off the train. After a search and interrogation, the guys were released, but the concert was canceled.

The media noted that the music of IC3PEAK contains “calls for suicide”, which can have a detrimental effect on the mental state of teenagers, and also expresses the “anti-social views” of the musicians. Representatives of public organizations included IC3PEAK in the list of groups that “are undesirable due to the context of the songs” and planned to go to court with the intention of obtaining an official ban on the duo’s performances in Russia.

Detention of IC3PEAK in Novosibirsk

In connection with a series of disruptions to IC3PEAK concerts, the guys are extremely reluctant to give interviews, and in a conversation with an MK journalist, they said that a ban on their music and music in general would have an extremely negative impact on the further development of Russian society. In the fan community, the option of moving Nick and Nastya to one of the European countries is being actively discussed, but the musicians themselves deny such a development of events and express the hope that it will not come to this.

In December 2018, an article appeared saying that Ramzan Kadyrov invited the duo IC3PEAK to Chechnya, noting that Chechnya had good venues for performances. Huskies and Eldzhey were also honored to be invited to Chechnya. There was no response from the musicians.

On December 15, 2018, in support of IC3PEAK, the Agglomerat club hosted an event called “?!”, expressing bewilderment about the persecution of artists. The first part of the evening was held in the form of a discussion, and the second, a concert, was attended by performers Sestrica, Bad Zu and Sewage Sour. More than 10 popular DJs and musical groups performed in the night program. The money from ticket sales was transferred to Nick and Nastya.