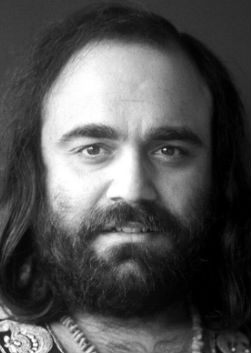 Demis Roussos is a famous singer of Greek origin who has received worldwide recognition with the hits Forever And Ever and Goodbye My Love, Goodbye. Roussos’ career is unique: with a recognizable lyric tenor voice, he has achieved success in the genres of art rock, pop song, classical aria and folk music.

Demis Roussos (at baptism received the name Artemios Venturis) was born on June 15, 1946 in Alexandria, an Egyptian city considered one of the centers of the origin of Hellenic culture.

Demis Roussos in his youth and childhood


His mother Olga, an Egyptian with Italian roots, was a singer. Father, Greek Yorgos Roussos, was an engineer. He was also fond of music, playing the acoustic guitar. In a word, Demis grew up in a creative atmosphere, and it is quite natural that the boy showed musical talents from an early age. While at school, he played the trumpet, guitar, organ and double bass. He was also the soloist of the church choir in the Greek Orthodox Church. He listened to jazz, Arabic and Greek music.

In the mid-50s, the Suez Crisis erupted in Egypt – the country’s authorities tried to withdraw the Suez Canal from British control. Due to the unrest that followed these events, in 1961 the Demis family had to flee to their historical homeland – to Greece.


Demis’s parents went bankrupt, and the homeland received them unkindly. In order to somehow support them, the young man began to play the trumpet in jazz ensembles, then the bass guitar in a pop group. Once the vocalist lost his voice. Demis decided to stand at the microphone and was surprised to find that he could sing.

In 1963, Roussos performed in The Idols, along with keyboardist Vangelis (Evagelos Papatanassiou) and drummer Lucas Sideras.

In 1967, when all three were studying at the Sorbonne University in Paris, a military coup took place in Greece – a junta of “black colonels” seized power in the country. The musicians decided not to return to their homeland, and instead went to London, where all the most important events in the world of music took place. But none of them had a British passport and residence permit, so the friends ended up in Paris again.


In France Roussos, Vangelis and Sideras decided to start an art rock band called Aphrodite’s Child. They managed to get a recording contract with the Philips record label. But even here politics intervened in the life of musicians. In 1968, while they were recording their debut album, student riots broke out in France. The studio was closed, but “Child of Aphrodite” managed to record exactly one song.

The group’s first single, Rain And Tears, became a big hit and sold over 1 million copies. For some reason, the listeners were sure that this was a love song. It was actually a song about how the police used tear gas during student rallies. The music in the song is an arrangement of the “Canon in D” by a German composer of the 17th century.


Over the next three years, the compositions of the rock group occupied high positions in the charts. But soon disagreements began between Roussos and Vangelis. Vangelis was more comfortable sitting in the studio and insisted that the band shouldn’t play shows. Roussos opposed. Unlike Vangelis, he did not compose songs for other authors, which means that he did not receive royalties from the sale of records. Touring was his only source of income.

In the end, the musicians came to a compromise solution: Vangelis remained in the studio, and Demis went on tour with a guest keyboardist. The recording of the album “666” finally split the group. Vangelis, an experimenter by nature, decided to put the Apocalypse of St. John the Evangelist to music. Roussos and Sideras objected that listeners would not understand such a complex thing, sales would be low. Demis always gravitated towards folk music and wanted to move in this direction.

When the record was released in 1972, Aphrodite’s Child no longer existed – the friends parted ways after the completion of work on the material. “666” was not a commercial success, but gained recognition over the years. Salvador Dali and Andy Warhol were completely delighted with the album. Oasis vocalist Noel Gallagher admitted that his favorite track is “The Four Horsemen” from the album “666”. Procupine Tree frontman Steven Wilson called the disc “one of the greatest concept albums of all time”.

After leaving Aphrodite’s Child, Roussos began his solo career. In 1971 Roussos released the single We Shall Dance which became a big hit in Italy but went unnoticed in most European countries. The debut album Fire And Ice, released in the same year, took 4th place in the Belgian charts, and 9th in the Netherlands.


The real breakthrough was the 1973 album Forever And Ever. The track Goodbye My Love, Goodbye became especially popular. The song was originally recorded in German and became a hit in Germany. The English-language version became the singer’s “calling card”, despite the fact that the song Forever And Ever sold better.

The new work of the Greek contrasted strongly with the experimental music of Aphrodite’s Child: Demis’s honey tenor, set to a very primitive pop melody, won the hearts of listeners around the world, but turned away the fans of the Vangelis trio.


In the USSR, Demis Roussos generally became the most popular foreign performer. The most famous song was Souvenirs To Souvenirs. In the USSR, it was translated as “From Souvenirs to Souvenirs”, although in fact “souvenirs” meant “memories”. And the song “Goodbye my love, goodbye” could be heard even in the cartoon about the adventures of the parrot Kesha. According to rumors, Leonid Brezhnev liked to listen to this composition before going to bed.

Demis Roussos was very popular in the USSR


According to music critic Artemy Troitsky, the progressive audience of the USSR treated Demis with irony, and only housewives and restaurant regulars loved the Greek.


In 1975, three of his albums: Forever And Ever, My Only Fascination and Souvenirs, hit the UK Top 10. In 1976, the BBC showed the film The Roussos Phenomenon.


Music critics accused the singer of being too sweet, called him a “singing tent”, “a fat sex symbol in a caftan”, and his vocal abilities were explained by castration. In fact, the culprit was a sore throat that Roussos suffered as a child. The vocal cords were not completely restored, which was the reason for the unique, unlike anything vibrato.

In 1982, Roussos, along with Vangelis, recorded the soundtrack for the Ridley Scott film Blade Runner. During the scene where Deckard was stalking the replicant Zora at the Taffy Lewis club, Tales Of The Future was played with Demis on vocals.


On June 14, 1985, the singer was captured by Hezbollah terrorists who hijacked a plane on an Athens-Rome flight. Roussos was on board with his third wife, Pamela. The terrorists ordered the pilot to fly to the Middle East. Their demand was the release of 700 Lebanese prisoners from Israeli prisons.

The plane landed in one of the countries of the Middle East, Roussos, his wife and 7 other Greek hostages were kept in a separate apartment. The singer was popular in Arab countries, so he was treated with respect. One of the terrorists even asked the star for an autograph, while another criminal wanted to take a shower and asked the singer to guard his Kalashnikov assault rifle.


It all ended with the Greek government releasing the accomplice of the terrorists, who was detained at the airport, in response, the bandits released all the Greek hostages. Subsequently, Roussos called them “good people”.

This incident forever changed Roussos’ approach to creativity. He lost a lot of weight from stress, quit pop music and began to experiment with different genres. With the German band Tangerine Dream he recorded the track Attitudes, produced by Reimer Pinsch. He recorded classical arias, Italian arias, songs with Japanese flutes, ethnic music.

Demis Roussos experimented with musical genres to the last


In November 1986, Demis Roussos first came to the USSR and even appeared on Soviet television in the ranks of the viewers of the program “What? Where? When?”.

His last album Demis was released in 2009. It was recorded with British musicians and was blues rock.

The singer was married 4 times. First wife Monica bore him a daughter, Emily. The second wife, Dominica, gave birth to a son, Cyril. Kirill became a DJ, in the late 90s he made a club version of Forever And Ever.

Demis Roussos with his wife Dominika and son Kirill


The third wife was the American model Pamela Smith. She was with Roussos on board the plane hijacked by the terrorists.

The fourth wife of the singer was a Parisian named Marie.


Demis Roussos protested when he was called “women’s favorite”. He believed that his songs are addressed to everyone, have a universal meaning.

He was worried about the situation in the music business. In the 70s, musicians were allowed to develop, and at the beginning of the 21st century, the artist had to immediately issue a finished product, which was thrown onto the market and immediately forgotten. Therefore, creative people have ceased to evolve. Roussos also did not like that people stopped communicating, everything was replaced by SMS and email.


When the economic crisis hit Greece in 2014, the singer spoke out on this subject as well.

Greece is the scapegoat of a grand scheme concocted by groups of people and banks that rule our planet.

Roussos called Mozart his favorite composer – “because he was so childishly sensitive.” Of his contemporaries, he highly appreciated Sting – “because no one can sing his songs in the same way as he himself.”

Demis Roussos died in Athens on January 25, 2015. The singer’s body was immediately attacked by 3 types of cancer: stomach, pancreas and liver. On the same day, parliamentary elections were held in Greece, and the singer’s relatives announced his death only on January 26, so as not to distract people from such an important event.


On June 15, 2016, Emily and Kirill opened the Demis Roussos Museum in Nijkerk, the Netherlands.