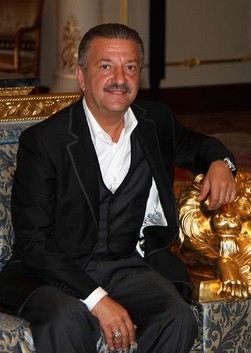 Telman Ismailov is an extraordinary businessman and talented manager. For a long time, the name of this wealthy entrepreneur was associated exclusively with the activities of the famous Cherkizovsky market in Moscow. Today the market is gone, but the career of our today’s hero is still going on. At present, the AST group, owned by Telman Ismailov, owns a successful business covering many different industries. Cargo transportation, construction, publishing, restaurant business, and much more – all this is only a small fraction of the assets of a well-known Azerbaijani entrepreneur.


But what else do we know about this extraordinary businessman? Today we decided to collect all the interesting facts from the life of the legendary entrepreneur in one article.

Early years, childhood and the family of Telman Ismailov

Telman Ismailov was born on October 26, 1956. Baku, rich in sun and oil, became his hometown. Perhaps it was this interesting fact that predetermined the entire future course of the life of our today’s hero.

In the family in which Telman Ismailov was born, there were eleven more children in addition to himself. Among them all, the future famous businessman was one of the youngest (namely, the tenth in seniority). His father was an Azerbaijani by birth. And my mother, in addition to Baku, also had Jewish roots.

As for business and trade, our today’s hero was engaged in them from a very early age. The thing is that his father was a major Azerbaijani entrepreneur with his own semi-legal business in Baku. Produced in state-owned factories, products were sold under the counter. And therefore, assistants to Ismailov Sr. were needed almost constantly. Telman did not resist this state of affairs and from the age of fourteen he helped his father with might and main in his shadow business. In that period, commerce and entrepreneurship were only possible with good connections. That is why our today’s hero always willingly made new acquaintances.

How much did Telman Ismailov’s hotel cost?

Soon, Ismailov Jr. acquired many important connections and even managed to head the only commercial store in Baku in this way. However, this enterprising Caucasian very soon seemed not enough. In 1973, he entered the Azerbaijan People’s Economic Institute named after. D. Buniat-Zade, where he later studied for three years.

The next stage in the life of a talented businessman was the army, after which he again returned to his studies, but this time he entered a Moscow university. In the Russian capital, he began to study at the Plekhanov Institute of National Economy. He received a diploma from a designated educational institution in 1980.

An extraordinary Caucasian businessman began his career as an economist at the Ministry of Trade. In parallel with this, he also worked as an expert on certain issues at the Vostokintorg enterprise.

Our today’s hero created his first commercial company in 1987, choosing a very controversial name as a brand name – “Commercial Charitable Company”. In this company, in fact, Telman Ismailov’s career began in the world of big business. Developing it, a talented Azerbaijani entrepreneur acquired friends and serious connections. So, one of the good friends of the businessman was the then chairman of the cooperative commission of the Moscow City Executive Committee, Yuri Mikhailovich Luzhkov. The Caucasian entrepreneur also had good relations with the notorious Moscow business lady Elena Baturina.

With their active support, Telman Ismailov organized the AST company in 1989, which at that time consisted of only one division. Developing his business, an extraordinary Azerbaijani businessman constantly mastered new directions. At present, the large Azerbaijani-Russian holding includes 31 companies, each of which specializes in its own business area. Thus, the structure of the group of companies includes enterprises operating in the construction and hotel business, passenger transportation, jewelry production, restaurant business and many other market segments. As mentioned above, for a long time, the AST holding actually owned the Cherkizovsky and Warsaw markets in Moscow.

Lezginka at the birthday of Telman Ismailov

According to some reports, the total annual turnover of the holding is estimated at 2 billion dollars. In addition, Telman Ismailov personally also owns the “seven-star” hotel “Mardan Palace” in the Turkish city of Antalya. The grand opening of the hotel complex took place in 2009 on the day when the deceased father of the entrepreneur – Mardan – was to be one hundred years old.

In the second half of the 2000s, our today’s hero was in 76th place in the ranking of the richest people in Russia. At the time, his personal fortune was estimated at $620 million. At present, according to some reports, the fortune of one of the most talented businessmen in Azerbaijan is estimated at more than 1 billion dollars in terms of US currency.

In addition to commercial activities, the entrepreneur is engaged in patronage within the framework of the Eurasian Congress of Jews. In addition, he was also a long-term sponsor of the singer Abraham Russo and the football club of the Russian Premier League – Terek Grozny.

Telman Ismailov is married. He has two sons – Sarkhan and Alekper, who today are co-owners of the AST holding. The brother of our today’s hero, Fazil, for a long time served as the prefect of one of the administrative districts of Moscow.

In his free time, Telman travels a lot (in addition to Russian citizenship, he also has Turkish citizenship), and also collects watches. Currently, his personal collection consists of two thousand copies.