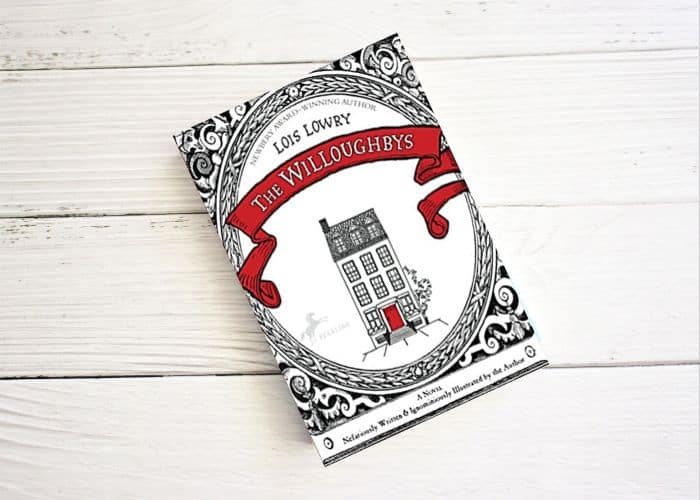 “The Willoughby parents frequently forgot that they had children and became quite irritable when they were reminded of it.”

The Willoughbys by Lois Lowry

I have recently read a book called The Willoughbys by Lois Lowry.

It was an equally entertaining and yet perhaps more importantly, disturbing read.

I have read some of Lois Lowry’s other books such asNumber the Stars and Autumn Street. I thoroughly enjoyed them both, but I had very mixed feelings about The Willoughbys.

I know many of you aren’t going to agree with my thoughts on this particular book, however if you are interested in my opinion, read on.

A Summary of The Willoughbys

Quickly, before we move on, here is a quick little bit about the book in case you haven’t yet read it.

In the beginning of the book we are introduced to a number of characters. There are Mr. and Mrs. Willoughby, who detest their children and try to think of a way to be rid of them.

Then there is Timothy, the oldest Willoughby child who is a very bossy and controlling older brother.

There are Barnaby A and Barnaby B, who are twins and are usually called A and B.

And last , but not least there is Jane Willoughby the youngest, who is treated very poorly by her brothers.

My Thoughts About This Book….

Now, there are a few things that really disturbed me about this book. But first I feel it only right that I mention the funny side to this book. There are many hilarious occurrences in The Willoughbys that will make anyone in the family laugh.

As for me though, those funny parts were overshadowed by the fact that this book reminds me so much of a Roald Dahl book. I have written a post that you can read here explaining why I won’t recommend Roald Dahl’s books. I won’t go into detail about that in this post, as I know that the very subject is surrounded in controversy and I have gotten several negative comments about it.

There are many great stories where there is a mutual dislike between children and parents, but it’s usually because the parents are abusive, or controlling, like for example in The War That Saved My Life by Kimberly Brubaker Bradley, Ada, the main character hates her mother because her mother wouldn’t let her out of their flat (because Ada had a clubbed foot and her mother was ashamed of it) Ada’s mother would shut her in a cupboard sometimes, where little bugs would crawl all around her.

Ada hating her mother was understandable. Perhaps not right, as we shouldn’t hate anyone but, we can see why she would. Her mother was mean and oppressive towards her.

In The Willoughbys however, their reasons for hating each other were petty. I don’t know why Mr. and Mrs. Willoughby hated their children so much. There isn’t really a reason present. They just don’t like their children. Nothing more to be said.

As for the children. They don’t like their parents because their mother makes gross food, and she only knit one sweater for the twins to share.

Now maybe these are valid reasons for not liking their parents, but are they reason enough to want to get rid of them? Their parents provided them a roof over their heads, food in their bellies, they never physically abused their children, and in one scene their father even reads to them!

Now, I don’t want to include any spoilers, so I’ll just say that I’m not sure what Mr. and Mrs. Willoughbys intent was when they went for the trip. Were the stories told on the postcards sent to the children from them made up? I can’t decide. Where they on a suicide mission? I just don’t know, but it was pretty strange.

I would like to see the family resolve their issues with one another, or some other redeeming scenario. This to me, makes a good story. But the author chose a different approach.

There is only one other thing I’ll mention about this short book, and that is one scene in the book in which one of the characters, a man named Commander Melanoff wants to touch Nanny’s bottom. He doesn’t in the end, thank goodness, but I think that that sort of thing does not belong in a children’s book.

This is one of the longest reviews I written yet, but I had quite a few thoughts about this book as I was reading it.

The Willoughbys had great potential to a funny story, to be enjoyed by the entire family. However, some of the events that take place in this book are disturbing. The children are really naughty, but they never have to pay the consequences of their actions.

If you enjoy reading Roald Dahl books, like Charlie and the Chocolate Factory, James and the Giant Peach, The Twits, or Matilda, then you may very well enjoy this book. If you, like me do not like Roald Dahl books, then pick something else to read. There are so many better and richer books out there for your children to read.

I hope you found this review helpful. If you did, then please consider sharing it and checking out our other posts. If you or your children have read The Willoughbys, then please share your thoughts in the comment section below.