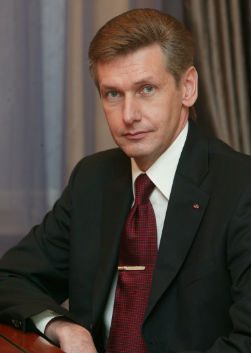 Tony Oleg Vilyamsovich – builder, manager, honorary railway worker. Born on May 10, 1964 in Voronezh. Grew up and studied in Russia. Known as Deputy General Director of Russian Railways OJSC. Engaged in the development of the Moscow and St. Petersburg transport hubs.

In the photo: Tony Oleg Vilyamsovich

Oleg Toni received his higher education in his native city. In 1988, he graduated with honors from the Voronezh Civil Engineering Institute with a degree in civil engineering. Many graduates of the university were able to succeed in the construction industry and take leadership positions in large companies. In 2015, the Academic Council awarded Oleg Tony the title of Honorary Professor. A year later, the Institute was merged with the Voronezh State Technical University.

The beginning of the labor path

Oleg Toni started working at the age of 22. Even during the period of study at the university, he got a job at the Voronezh Stroytrest as a master of construction and installation management. The young specialist showed himself well, so he was soon called to work in St. Petersburg. After the move, his career skyrocketed. In the Construction Department of the Leningrad Industrial Construction and Installation Association, he rose to the head of the production department. After some time, Tony Oleg Vilyamsovich became the technical director of the Construction Department No. 228.

The next stage of Tony Oleg Vilyamsovich’s professional activity is connected with ZAO Baltic Construction Company. In 2002, he increased his shareholding and became CEO. Under his management, the company bought a stake in OJSC Zavod Korpusov, which specializes in the production of metal structures, and grew several times, which allowed it to enter the capital market and receive contracts for the construction of large facilities in Moscow and St. Petersburg.

Tony Oleg invested in subsidiaries, opened new branches in the regions, and together with partners founded companies specializing in the construction of civil buildings and structures. The business expanded rapidly with regional divisions. By 2004, there were about a hundred of them, and the staff was more than 30 thousand employees. The company worked in five directions – BSK-Moscow, BSK-St. Petersburg, BSK-South, BSK-Vostok and BSK-PGS. Each year, she built more than 2,000 km of railways and leased 70,000 sq. m. m of housing.

Under the management of Tony Oleg Vilyamsovich CJSC “BSK” several large facilities were built. The largest include the Samara and Ladoga railway stations, the Lokomotiv stadium, the buildings of the Russian Orthodox Church, the Central Clinical Hospital. Semashko.

In 2004, Oleg Toni started working at JSC Russian Railways, therefore he left the shareholders of CJSC BSK. In March, he was appointed First Deputy Head of the Department of Capital Construction, and in the autumn he headed the Department. In 2005, he became a member of the board of Russian Railways, and 7 months later became vice president of an open joint stock company.

Over the long years of work at Russian Railways, Tony Oleg has established himself as a competent and efficient manager. In 2017, he became Deputy General Director, and in 2019 he headed the Center for the Development of the Central and St. Petersburg Transport Hubs, a division of Russian Railways.

Tony Oleg Vilyamsovich is engaged not only in professional, but also in social activities. He made an invaluable contribution to the development of cooperation between RZDstroy JSC and VSTU. The department “Design and construction of linear facilities” was created at the university. Now students can take part in practical training at the facilities of Russian Railways.

Oleg Tony was awarded the badge of the “Honorary Railwayman”, the Order of St. Sergius of Radonezh II degree and other awards.