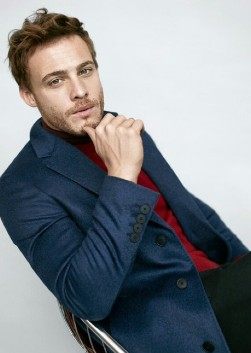 Kerem Bursin is one of the most successful and bright Turkish actors of our time. It is popular not only in Turkey, but also among American and Russian lovers of oriental series in America and Russia. Thousands of women sigh dreamily, remembering his skillful and sensual game in the Turkish youth film “Waiting for the Sun”. In the spring of 2023, the actor announced that he would soon begin acting in the new series Knock on My Door, and the first episodes of the picture were released in the summer.

In the photo: Kerem Bursin

Kerem was born in Istanbul in the summer of 1987 to businessman Ibrahim Pamir and housewife Chigdem Bursin. At that time, they already had one child – daughter Melis. The business that my father was engaged in required frequent business trips to other countries. Until the boy was eleven years old, the family moved several times: from Turkey to Sweden, from Sweden to Indonesia, and from there to the United Arab Emirates and Malaysia. Each country had its own foundations, traditions, which Kerem absorbed like a sponge. The boy retained a genuine interest and respect for the cultures of people of other nationalities for the rest of his life.


They also influenced the choice of profession. Kerem was a teenager when the family settled in Texas and the move ended. He went to a new school, where he soon made friends with whom he formed a rock band. And more and more Kerem wanted to become an artist, especially when he watched a movie with Jean-Claude Van Damme, his teenage idol. Later, Bursin was struck by the cycle of films about Batman, he even more wanted to get on the set. He became an active participant in school theater productions, even being recognized as the best actor in the school for the role of Christopher Columbus.

Kerem Bursin in his youth


After leaving school, at the insistence of his father, he entered the Department of Marketing at Boston University, but continued to hone his acting skills. Ibrahim Pamir dreamed of seeing his son continue the family business, and he dreamed of Hollywood and played on the stage of the student theater, at the same time became interested in baseball and swimming, played lacrosse, a game invented by North American Indians. On the recommendation of the head of the theater studio, Kerem, having received a diploma in marketing, entered the acting department of Emmerson College in Boston. Mom supported the initiative of her son, unlike his father.

In his interviews, Kerem admitted that for the rest of his life he remembered his first casting, which was organized for him by a friend at the university. He was terribly afraid of the director, forgot the text from excitement and went home absolutely sure of his failure. But the next morning they called him and said that he was approved. Kerem was happy: the role in the film by Roger Corman “Thursday” was small, but the start was made.

Soon, the charismatic Turk began to learn acting from Eric Morris, who discovered the inimitable Jack Nicholson and the legendary terminator Arnold Schwarzenegger to world cinema.

Kerem Bursin in the movie “Akulosminog”


To earn a living, Bursin took on any part-time jobs: he was a security guard and a driver, a waiter and a bartender. And he became a regular participant in various castings. He got small roles, little money was paid, but Kerem was glad that he was doing what he loved, even if not in the highest grossing films. He recalled that from the American period of acting, the most delusional in his cinematic life was Declan O’Brien’s film “Shark O’Brien”, where he played Andy Flynn, the partner of the protagonist, who was embodied by Eric Roberts.

At the time of filming the horror film “The Phantom of the Imperial Palace” by Anthony Sito, Bursin dreamed of becoming the main Turkish actor in Hollywood. But when the directors asked him about film projects in the homeland of his childhood and found out that Kerem spent his adult life in America, interest in him disappeared. His surname was almost always pronounced incorrectly, which upset the actor, since it was rooted in one of the Turkic leaders.

Kerem Bursin in the film “The Phantom of the Imperial Palace”


Over time, the young man realized that it was better to be the first in Turkey than to get lost in the large crowd of beautiful and talented, but little-claimed Hollywood actors. Chance helped to become a star at home. He traveled to Turkey for his cousin’s wedding, where he met Gaye Sokmen, a producer who recommended the young man to a casting agency.

The very first test in the Turkish drama series “Waiting for the Sun” by Altan Denmez brought Bursin the main role of Ganesha Beklerken. Sensual Kerem won the hearts of fans of television series instantly. He was immediately invited to Chagan Yrmak’s musical melodrama Whisper If I Forget, where he met on the set with Turkish film stars Farah Zeynep Abdullah and Mehmet Gunsur.

Kerem Bursin in the movie “Whisper If I Forget”


Altan Denmez did not forget about Kerem’s brilliant performance and invited him to play the lead role in his next TV series A Matter of Honor. Yigit Kılıç performed by Bursin turned out to be impudent and cunning, dissolute and selfish.

Kerem Bursin in the series “A Matter of Honor”


Then there was a break in Kerem’s creative career. He never starred in the project “Beyond Longing”, although he had high hopes for this role, and went to travel the world in the company of actress Serenay Sarikaya. About that period, Bursin later says:

I missed everything – the adrenaline that work brings, the satisfaction of a job well done, even the fee! But it was important for me to take this break, because now I am completely freed from the influence of past images. For a long time I worked at a frantic pace, and at some stage I felt devastated mentally and physically exhausted. This break has benefited me in every way.”

He returned to acting work in 2017 – in the multi-episode drama “This City Will Follow You” by Chagry Vila Lostuvaly and Ender Mihlar. Love and boxing, social inequality and victory over oneself – all this was embodied on the screen by Bursin in the image of Ali Smith. An interesting experience for the actor was the Turkish military action movie Chagatai Tosun “I will give my life.”

Kerem Bursin in the movie “This City Will Follow You”


The bright actor was noticed not only by fans, but also by advertisers. Kerem was invited to cooperate with several well-known brands, as well as Garanti BankasI. The well-known clothing brand H&M also signed a contract with Bursin.


In 2018, the actor starred in Umut Aral’s sports comedy-drama film Good Game and attended the World Football Championship in Russia. Kerem arrived in the capital as a special guest of the sponsor of the World Cup, the brewing company Bug. Having visited one of the matches, the actor was happy to talk with Russian fans, sign autographs and take many pictures, not forgetting to share them with his Instagram followers. Returning to his homeland, he plunged into the atmosphere of the comedy mini-series Aynen Aynen, in which he starred along with Nilperi Shahinkaya and Uraz Kaigilaroglu. The actor also starred in the crime thriller Çağatay Tosun and Baris Erjetin “The Magnificent Two”, where he embodied the image of the police commissioner on the screen. His partner, a complete opposite in character, was played by Ibrahim Celikkol. They, two successful police officers, but who cannot stand each other, together need to expose the activities of an international criminal group and catch its leaders. The series was released on Turkish TV screens in 2019.

Kerem Bursin in the movie “Lifeless”


Bursin also decided to try his hand as a producer. The first test was Alpan Eseli’s fantastic vampire saga “Lifeless”, where he also starred in the title role of almost five hundred-year-old vampire Dmitry. Another producer work of Kerem was the project of Tolga Karacelik “Butterflies”. The audience highly appreciated the psychological intensity of the picture about three brothers who, after a long absence, came to their native village for the funeral of their father.

The actor says almost nothing about the American period of his personal life. When he began to be considered one of the sex symbols of Turkey, it became much more difficult to hide the relationship, I had to answer some questions from the ubiquitous journalists. Filming in the film “Waiting for the Sun”, Kerem met an attractive young actress Yagmur Tanrisevsin. Together they were for a year, after which they broke up without explanation. Bursin’s friends clarified the situation – the actor was tired of the constant whims of a spoiled girl.


In 2016, Kerem starred in the same advertisement with actress Serenay Sarikaya. It was love at first sight. In one of the interviews, the guy admitted that he was happy and in love as never before, and the press immediately started talking about the upcoming wedding. But young people were in no hurry to formalize the relationship, motivating such a decision with total career employment and the fact that marriage is too serious a step.


Haters said that Serenaya demanded that her lover draw up a marriage contract, which was the first crack in their relationship. But Kerem did not reproach the girl with a single word in public. I must say that respect for the fair sex is a distinguishing feature of Bursin from his many colleagues.

Alas, after several years of living together, the most promising couple in Turkey, as they were called in the press, broke up. In 2019, the paparazzi captured Serenaia in an embrace with another actor, Cem Yilmaz, who broke up with his former passion Defne Samyeli for her sake. And Kerem, according to journalists, found solace in the arms of the young singer Melisa Senolsun.


At the beginning of 2023, the tabloids started talking about the actor’s new romance – with the beautiful Turkish woman Demet Ozdemir, to which Bursin turned to the publications with a request not to spread rumors about his romantic adventures, noting that he was not one of those who start an affair for the sake of intrigue:

I’d rather be single for five years than start an affair with the first woman I meet. For me, an example of true love will always be the relationship between my grandparents.

The summer of 2023 was marked for the actor by the premiere of the new melodramatic series Knock on My Door. In it, he is the head of a commercial enterprise named Serkan, in whose life changes are taking place on the personal front. Bursin’s partners in the film were Hande Erçel and Melissa Dongel.