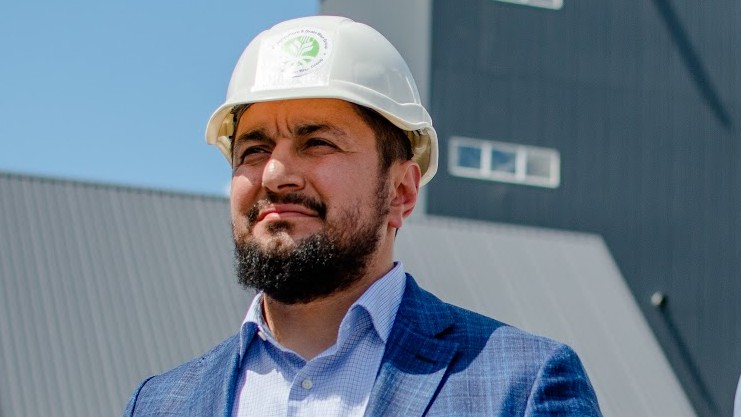 Place of Birth. Education. Born on January 16, 1982 in the village. Shaumyanovsk (Shaumyanovsky district of the Azerbaijan SSR) in the family of the chief architect of the Shaumyanovsky regional executive committee Hovhannes Misakovich Khidiryan.

Mother, Amalia Khidiryan, was in charge of the regional archive.

In the early 1990s, during the conflict in Nagorno-Karabakh, the Shahumyan region was classified as a disputed territory. In 1992, the Armenian population of the region was deported. Due to the difficult political and economic situation in their small homeland, the Khidiryan family, where, in addition to Misak, had two more children (Arsen, born in 1988 and Samvel, born in 1983), had to move a lot.

Hovhannes Khidiryan worked as a general director at the Rempolitechstroy enterprise, was the director of oil construction services at the Alfa-Nafta oil company. In the summer of 2011, the head of the family died suddenly at the workplace.

In memory of the father and husband, the Charitable Foundation named after A. Khidiryan Hovhannes Misakovich. Amalia Khidiryan is the co-founder of the Foundation. HOM, Samvel Khidiryan - co-founder and head of this charitable organization. Misak Khidiryan - the main trustee and sponsor of the foundation.

In 1998-2002, Misak Khidiryan graduated from the Russian International Institute of Economics and Law (MIEP), qualification - Bachelor of Laws. In 2004, he received a master's degree from the Tyumen State Oil and Gas University (now - Tyumen Industrial University). In 2007-2009 he studied at the Kiev University of Market Relations, after - master of banking. In 2018 he graduated from the Dnepropetrovsk State Agrarian and Economic University (Master, specialty - finance, banking and insurance).

Career. He started his career in the financial sector.

In the period from 2004 to 2016, he worked in senior positions in LLC "Ukrprombank", PrJSC "AKTABANK", PrJSC "FINEKSBANK". In the law firm "Law Firm "Vox Legum" he proved himself as a professional in the field of jurisprudence.

Simultaneously with banking and advocacy, he began to invest in the private sector.

In 2013, he became the owner and founder of the AGR Group (plant growing, dairy farming and elevator business). Also in the sphere of interests of the entrepreneur is trading. Khidiryan develops this direction separately, outside the business of AGR Group.

key asset. In 2017, he created the agricultural holding AGR INVEST HOLDING LTD. In 2018, the AGR Group holding is included in the TOP-100 Ukrainian latifundist rating for the first time.

Over the years of operation of the enterprise, Khidiryan has updated his own fleet of agricultural machinery by almost 100%. In 2023, AGR Group has 30 trucks, 19 combines, 55 tractors, 31 harvesters, 24 seeders of TM John Deere, New Holland, Case, Zaffrani, Olimac Drago, etc.

In 2023, at the enterprises included in the Brovary and Grebinka clusters, the entrepreneur introduced a precision farming system. Thanks to the innovation, the area under cultivation increased by about 10%, the production - by 25%. In general, according to the results of the 2023/2023 agricultural season, the yield indicators in the AGR Group are above the national average (corn - 7.8 t/ha, soy - 2.7 t/ha).

Also in 2023, Khidiryan opened an elevator complex in Seredina-Buda, Sumy region. The volume of investments amounted to $17 million. The capacity of the first phase of the project - 112 thousand tons of one-time storage and 3 thousand tons / day of acceptance and shipment. At the same time, Khidiryan is investing in the digitalization of the production process at AGR Group and artificial irrigation systems.

At the beginning of August 2023, AGR GROUP agricultural holding received a new positive audit opinion from KPMG. The company has been confirming its consolidated financial statements since 2016. At the end of 2023, the company's income increased to $47.3 million, which is 3.3 times higher than the first similar indicators confirmed by KPMG.

Quotes. Misak Khidiryan about AGR Group: "Holding is our child. Our task is to transfer the accumulated knowledge and observe its activities, receiving the declared result from authorized specialists. In general, I strive to have less "I" and more "we" in our company. Yes, I control the processes , but if you approach business philosophically, then none of us is eternal and our task is to create a company that will not need us specifically."

About investment policy: "Throughout the entire period of the holding's development, from the acquisition of the first company to the present day, all the funds earned by the holding's companies were invested in its further development."

About development plans: "The main tasks facing the management of the holding in 2023 are to increase the land bank, create an irrigation system in the Kherson region, purchase new equipment and introduce new technologies, as well as purchase and build new elevator storage capacities. For each of these tasks, investment projects are being developed.

About the land bank: "Now we are already focusing on 100 thousand hectares. We will expand in the regions of our presence and with the introduction of the reclamation program we plan to actively develop in this direction. We are also considering the Sumy region, since our elevator is located in this region."

About the elevator direction: "We want to buy already built elevators with ready infrastructure. It is more economical for us to buy an old elevator and invest in modernization and construction of new one-time storage facilities than to start building from scratch."

About crop production: "We are interested in the simplicity of crop rotation and stable demand for the main crops: corn, soybeans, sunflower - this is the top three in terms of international trade volume. Therefore, here the priority is stable demand and the volume of agricultural crops, which is profitable for growing and selling."

About dairy farming: "Herd growth occurs naturally, but we try to improve the genetics and performance of our animals as much as possible. If the state would fully subsidize at least the construction of areas for the location of the herd, then this would be a very interesting business, which should be given more attention."

About the IPO: "Every year we are getting closer to our goal. Today we are already ready to work with private investment funds and international financial institutions, we have begun negotiations with them on raising funds to fulfill the investment plan for this year."

About the new management structure of the company: "The holding introduces international corporate governance standards and strives to be more transparent and understandable for foreign investors."

On helping hospitals fight COVID-19: "We work on this land. We work together with the inhabitants of these regions and cannot just stand aside at a time when we face a global problem that can only be solved by joint efforts. We have helped and will help in every way we can."

Personal life. Spouse Tamara Khidiryan (born in 1983). Together with Misak Khidiryan they have four children. Co-founder of the Charitable Foundation. Khidiryan Hovhannes Misakovich.