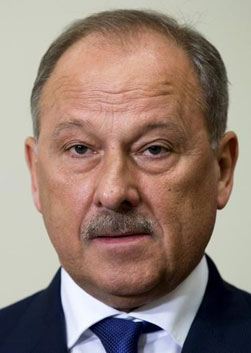 Vladimir Aleksandrovich Dmitriev is an international financier, corresponding member of the Russian Academy of Natural Sciences, vice president of the Chamber of Commerce and Industry, dean at the Financial University under the Government of the Russian Federation, ex-head of the state corporation Vnesheconombank, former chairman of the board of directors of the United Aircraft Corporation, diplomat.


The official, in whose official biography there is no information about work in foreign intelligence, is nevertheless carefully ranked among the cohort of former Chekists. This assumption is due to the fact that in the 1980s he served in Sweden for several years as an adviser to the ambassador in the Soviet embassy, ​​and his predecessor in this post was caught by the Swedish intelligence services in espionage.

In those same years, he met the future head of VTB, Andrei Kostin, and Vladimir Putin, who was stationed in the GDR, allegedly due to his involvement in one department.

Childhood and family of Vladimir Dmitriev

The future banker was born on August 25, 1953 in Moscow, in the family of Alexander Fedorovich and Lyudmila Ivanovna. His relatives were far from the sphere of finance – at the age of 14, both came to the Znamya Truda plant, where they subsequently worked all their lives. At first it was assumed that Volodya should follow in their footsteps. During the holidays after the 9th grade, he even worked as a turner. But he more and more clearly manifested a penchant for a foreign language and other humanitarian disciplines. Therefore, after graduating from school, he took the documents to the MGIMO admissions committee.

Vladimir Dmitriev with his parents


True, this attempt was unsuccessful – he flunked the entrance exam in mathematics and eventually became a student at a somewhat less prestigious Financial Institute (by the way, the family business was later continued by his 10-year-old younger brother Alexander, who became an aircraft manufacturer).

Volodya’s student life was full of interesting events. He studied well, passed exams ahead of schedule, went to construction teams three times – to the capital of Khakassia, Abakan, in the Moscow region, to Sakhalin, where he received, according to him, invaluable life experience.


For the entire fifth year of the institute, he worked at night as a loader at his parents’ “native” plant, which later joined the MiG aircraft manufacturing company. There he was engaged in loading aircraft onto car platforms and delivering them to the military in Lukhovitsy. In 1975 he received a diploma of higher education with a degree in international economic relations.

In 1975–1979 the young specialist worked in the State Committee of the USSR Council of Ministers for Foreign Economic Relations. Then he changed his field of activity from economic to political. Namely, he went to work at the Ministry of Foreign Affairs as an attaché of the Scandinavian countries department. In 1981, Vladimir Aleksandrovich, with his young wife and son, moved to Sweden, where he took the post of secretary of the Soviet embassy.


In the period from 1985 to 1987 he stayed in Russia, worked as a researcher at the academic Institute of World Economy and International Relations, then left for Stockholm for another 5 years.

Returning to Moscow in 1993, on the recommendation of one of his Stockholm colleagues, he accepted an offer to take the position of deputy head of the foreign exchange department in the Ministry of Finance. In this position, he was engaged in the issuance of bonds of an internal foreign currency loan, and since 1995 he worked in the external debt division.


In 1997, the head of Vnesheconombank, Andrey Kostin, succeeded in appointing Dmitriev as his deputy. In 2002–2004 he was vice president of Vneshtorgbank, and from 2004 and for the next 12 years headed VEB, making long-term investments in large projects that the country’s economy so needed.


In addition, since 2009 he has been promoting Russian business on the African continent as the head of the public organization AfroKom.

Vladimir Alexandrovich is married. The married couple has four children. Sons Pavel and Stepan followed in the footsteps of their father – both graduated from the Financial Academy, speak English and Swedish.

The eldest of them, Pavel, at one time held the post of head of corporate clients at Deutsche Bank. Then he went to work at Calion Rusbank, owned by the largest French group Credit Agricole, where he was responsible for working with authorities and financial institutions. The middle son Stepan works in an investment company. According to Vladimir, it is too early for daughter Zhenya and younger son Lesha to think about a career – they are still schoolchildren.

Vladimir Dmitriev is married and has 4 children


The head of the family himself maintains the knowledge of the Swedish language (which he likes very much, like Sweden) in working order. He was elected one of the leaders of the Russian-Swedish Business Council and, by the nature of his activity, regularly communicates with the Swedish businessman and former CEO of the telecommunications company Ericsson Hans Westberg.

Vladimir Alexandrovich loves hockey since childhood, and during his life in Sweden he “fell ill” with tennis. He is also fond of football and skiing. Colleagues characterize him as a high professional, restrained and intelligent person.

The financier, who has more than ten years of diplomatic service abroad, years in the State Committee for Foreign Relations of the Council of Ministers and the Ministry of Foreign Affairs, is a member of the Board of Trustees of MGIMO and the Skolkovo Science and Technology Innovation Center (since 2010), since 2013 he has been the head of the faculty ” International Economic Relations” of the Financial University.

In 2016, the head of Vnesheconombank, according to his colleagues, one of the best domestic specialists in foreign trade, was relieved of his post as chairman of the state corporation. According to a source close to the Supervisory Board of VEB, the reason for this decision is related to the fact that the ex-head, allegedly, only carried out the decisions taken by the government to increase the competitiveness of the Russian economy and stimulate the inflow of foreign investment, but did not inform about all the risks associated with them.

In the same year, the former head of a corporation that functions as a Development Bank was elected vice president of the Chamber of Commerce and Industry of the Russian Federation. In his new position, he mainly oversees investment issues. According to unnamed sources, if Sergei Katyrin leaves the post of head of the chamber, an ex-banker may be nominated for this position.