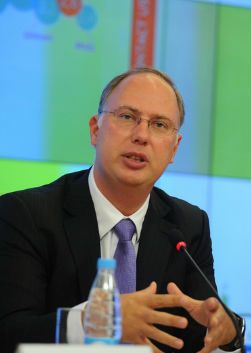 Kirill Dmitriev was born on April 12, 1975. From a young age, he strove to achieve his goals and implement plans, so he made every effort to get an excellent education: he graduated from Stanford and Harvard Business School.


Dmitriev’s ascent up the career ladder lasted 15 years. One of his most important achievements is his appointment as CEO of the Russian Direct Investment Fund (2011). In 2016, RDIF received sovereignty, and Dmitriev’s powers were extended for 5 years.

Kirill Dmitriev from a young age was responsible for learning and confidently went to achieve his goals. The first step on the way is to study at one of the leading educational institutions in the world – Stanford University, located in Silicon Valley. Just under 7,000 students from all over the world come to Stanford every year. At one time, Kirill Dmitriev was among them. In 1996, he graduated from an educational institution with the highest marks possible. As a result of his studies, he was awarded a bachelor’s degree in economics.

Kirill Alexandrovich did not stop there and entered the Harvard Business School. It was founded at the beginning of the last century and is famous for the high requirements for future students: only 12% of applicants enter the educational institution. Studying at Harvard is difficult, but it opens up endless career opportunities for graduates. Thus, about 20% of business school graduates hold senior positions in Fortune 500 companies.


Dmitriev excelled in education: in 2000, he graduated from Harvard Business School with a Baker Scholar mark, which means “highest distinction.” No more than 5% of the best students receive such a high mark, and Kirill Dmitriev was one of them. A brilliant education opened up broad career prospects for him.

In 1996, after graduating from Stanford University, Kirill Aleksandrovich takes confident steps in building a career – he receives an investment position. His first job was Goldman Sachs, a large commercial bank in New York. This institution is also known among financiers as “The Firm”. Areas of interest are securities trading, investment management, asset management.

At the beginning of his career, Dmitriev did not limit himself to investment banking and directed his efforts to improving his knowledge and gaining new experience. Until 1999, he also acted as a consultant for one of the largest and most well-known consulting companies, McKinsey & Company, which has branches in various cities around the world, including Los Angeles, Prague and Moscow.

In 2000, Dmitriev’s career takes a new turn – he moved to IBS, where for two years he held the position of Deputy General Director. The next steps on the path to success are the position of investment director, a little later – the posts of managing director and partner of Delta Private Equity, which he held until 2007.

April 2011 is a significant date in Dmitriev’s biography. At this time, he was appointed to the position of CEO of RDIF. Further, he was included in the ranking of the 100 most influential professional figures in the PE (private investment) industry over the past 10 years by Private Equity International. Not a single Russian has been awarded such recognition before.


In his six years as the head of the RDIF, Kirill Dmitriev has achieved significant success in attracting investments from abroad aimed at developing the economy and various industries of our country, and implementing the most important infrastructure projects. According to a report for 2017 provided to Russian President Vladimir Putin, over the years of its existence, RDIF has attracted more than one trillion rubles in investments. Moreover, over 900 billion of these funds came from the fund’s partners, co-investors and banks. The United Arab Emirates, Saudi Arabia, many countries of the European and Asian regions provided their investor support to Russia.

According to statisticians, the result of the activities of RDIF under the leadership of Kirill Dmitriev is the attraction of investment capital in the amount of more than thirty billion dollars. These funds are intended for the preparation and implementation of projects in various fields – in pharmaceuticals, medicine, the creation of infrastructure and smart networks, the implementation of new business ideas together with foreign partners.

The leadership of the RDIF is not Dmitriev’s only high achievement. Kirill Alexandrovich is also Vice President of the RSPP and Russia’s Permanent Representative to the APEC Council and the BRICS Business Council.


In addition, he is a member of the boards of directors of Gazprombank, Transneft, Russian Railways and other companies.

Vigorous activity for the benefit of society, a significant contribution to the economic and social development of Russia, professional knowledge and labor successes of Kirill Dmitriev did not go unnoticed. In 2015, the statesman was awarded the Honorary Diploma of the President of the Russian Federation.

In 2019, the King of Saudi Arabia, Custodian of the Two Holy Mosques of Islam, Salman bin Abdulaziz Al Saud, awarded the RDIF CEO the highest award of the Kingdom, the Order of King Abdulaziz II degree. The solemn ceremony was held by the Crown Prince, Minister of Defense of Saudi Arabia Mohammed bin Salman Al Saud. The order was awarded for the primary contribution to the strengthening of cooperation between Russia and Saudi Arabia.