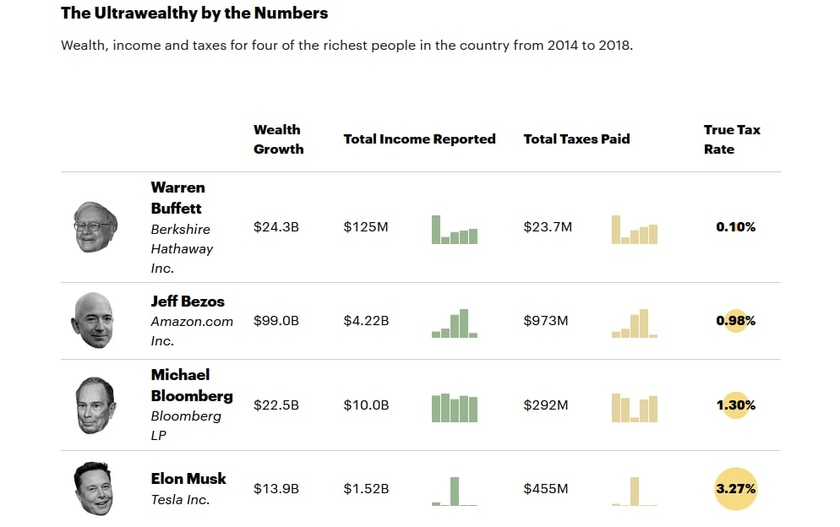 An extensive archive of IRS information on the 25 richest people in the United States was released in early June 2023.

Taken together, it shatters the cornerstone myth of the American tax system: everyone pays their fair share, and the richest Americans pay the most.

The richest Americans hide 20% of their profits from tax

At the end of March 2023, the US National Bureau of Economic Research published a study according to which US tax evasion is much higher than previously thought. According to the authors of the report, more than 20% of the income of the richest Americans is not reflected in the documents of the IRS.

Random checks may reveal some cases of tax evasion, but the study’s authors believe that the FTS easily overlooks revenues hidden in slightly more sophisticated ways, including in private companies and offshore structures. Collecting all unpaid income taxes from the richest 1% would increase US Treasury receipts by $ 175 billion a year, they said.

While data on many forms of income, including wages, is automatically reported to the FTS and is easily identified during a baseline audit, the profits of private enterprises and complex investment partnerships are more difficult to track. Such widespread income hiding means that wealth inequality may be even more pronounced than previously thought, the authors say.

Research economists believe that the FTS should use “additional tools” to effectively combat tax evasion at high incomes, including attracting whistleblowers and applying specialized audits.

At the same time, the FTS reports that the number of inspections of high-income taxpayers has dropped over the past decade, because funding for this unit has significantly decreased, as is the staffing.According to the Federal Reserve, in 2023, the wealth of the richest 1% grew by about $ 4 trillion, accounting for more than a third of all new wealth. Meanwhile, the net worth of the poorest half of U.S. households grew by $ 471 billion, just 4% of total growth in 2023.[1]