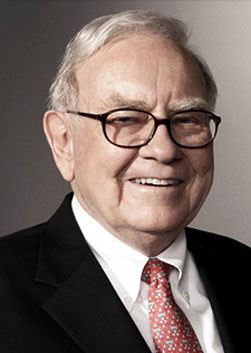 Warren Edward Buffett is a business tycoon, consistently ranked among the richest people on the planet, head of investment and financial holding Berkshire Hathaway, author of tutorials on the principles of capital investment, philanthropist. In 2010, he launched an unprecedented initiative. He urged world business leaders to take the so-called “Giving Pledge”, that is, to sign a commitment that they will spend more than half of their income on charity. In 2016, the number of people who signed this document reached 154.


In 2015, Warren was ranked third in The Bloomberg Billionaires Index, behind only Microsoft co-founder Bill Gates and Inditex clothing maker Amancio Ortega. In the first 6 months of 2016 alone, his fortune grew by $2.7 billion and was estimated at $65 billion (against 89 Gates and 73 Ortega), and the amount of donations to philanthropic organizations, primarily to the foundation founded by Bill and Melinda Gates, amounted to $2.9 billion

The talented entrepreneur and intellectual, who has amazing intuition and even received the ironic nickname “The Oracle”, is known for his commitment to long-term investments and personal thrift. In terms of political preferences, during the 2016 presidential campaign, he actively supported and sponsored Democratic candidate Hillary Clinton.

Childhood and family of Warren Buffett

The future legendary investor was born on August 30, 1930 in Omaha, Nebraska, in the family of a stock trader, later a congressman, and a housewife, a former fashion model. The couple had two more daughters – the eldest Doris and Roberta, the youngest child in the family.

Warren Buffett as a child


The father’s profession influenced his son’s passion for finance. Already at the age of 6, he surprised his parents with his ingenuity – he bought several cans of Coca-Cola and sold them to his home at twice the price. At the age of 11, having combined his savings with his sister, he bought 3 shares of the Cities Service company, which supplied gas to city houses, on the stock exchange. Their price initially fell, making him nervous, and then rose from $38 to $40. At this point, Warren hurried to sell the shares and made a small profit, but soon regretted it bitterly, since later the value of the securities increased 5 times. This experience made him later be more measured, take his time and always give preference to long-term investments.

Warren Buffett in his youth


When his father entered Congress in 1942, the Buffetts moved to the US capital. In Washington, Warren continued his studies at school. He did not abandon business experiments either. At first, the boy became a Washington Post peddler and saved $ 1.2 thousand in a year. He used them to buy a 40-acre (about 16 hectares) plot of land, which he began leasing to farmers.

At 15, the young entrepreneur and a friend invested $75 to buy three used pinball machines and install them in barbershops. Shortly thereafter, the teenager announced to his family about his intention to become a millionaire by the age of 30. Looking ahead, we note that his prediction was fulfilled almost on time – at the age of 31 he became the owner of a millionth fortune.

At the insistence of his parents in 1947, the young man entered the financial school of the University of Pennsylvania. He himself would have preferred to focus on his business projects and not waste time studying, but his father convinced him of the need for a decent education.


After his father left Congress in 1948, the family returned to his hometown, and the young man transferred to the University of Nebraska-Lincoln, where in 1949 he received a bachelor’s degree in business administration.

Then there was an unsuccessful attempt to continue his studies at Harvard, after which the future billionaire successfully became a student at the Columbia University Business School, where the famous economist Benjamin Graham, the founder of the concept of value investing, taught at that time. By 1951, Warren had acquired a master’s degree in economics. In addition, he was a free student at the New York Institute of Finance.

Upon graduation, the future financial tycoon worked for his father’s company Buffett-Falk & Co., then at Graham-Newman Corp. his mentor Benjamin Graham. Acquaintance with his book “The Intelligent Investor” he later called the most rewarding experience of those years.


In 1956, in partnership with friends and seven relatives, he established the investment company Buffett Associates. His investment decisions were almost always correct and consistently brought dividends to all shareholders.

In 1962, he began to buy securities of the Berkshire Hathaway textile factory close to bankruptcy, after 3 years he became the holder of 49 percent of the shares and at the same time its director. Subsequently, thanks to reprofiling and wise investments, the company acquired the status of one of the leaders in the financial market, and its value was estimated at $ 360 billion. The meeting of shareholders of The Berkshire Hathaway annually gathers about 20 thousand guests, for which it received the playful nickname “Woodstock for capitalists” in the press

In 2010, the billionaire made the most generous in history, an unprecedented act – he donated more than half of his capital, about $ 37 billion, to charity.

In 2011, Warren invested more than $10 billion in IBM, purchasing about 6 percent of the shares in this largest software developer.

According to Forbes, the legendary entrepreneur earned an average of $37 million a day in 2013.

In 1949, young Warren was infatuated with a girl whose boyfriend played a miniature ukulele guitar. In an attempt to compete with a rival, he also acquired one of these musical instruments and learned to play it. And although he failed to conquer the beauty’s heart then, the love of playing the ukulele became part of his life.

Warren Buffett with his first wife and children


At 22, he married Susan Thompson. The couple raised three children – Susie, Howard and Peter, but after 25 years of marriage they began to live separately, although they were not officially divorced. In 2004, Susan died of cancer, and 2 years later the financier remarried his longtime friend Astrid Menks. He then turned 76 years old, and the bride – 60.

The oligarch is unpretentious in everyday life, conservative, loves to play bridge, allegedly spending at least 12 hours a week on this activity. He is a devoted fan of the Nebraska Football Club, where he was appointed an honorary assistant coach.

The head of the financial empire lives in the central region of his native city in a house bought back in 1958 for $31.5 thousand. In addition, he owns a $4 million home in Laguna Beach, California. In 1989, he bought a private jet for $6.7 million, but later called this purchase an unjustified waste of money.


After his son’s adopted daughter, his beloved granddaughter Nicole, starred in Jamie Johnson’s documentary “The One Percent”, which told about the cruel financial stratification of society, Warren disowned her relationship and deprived her of financial assistance.

In April 2012, one of the most famous investors in the world fell ill with prostate cancer. The doctors successfully completed the treatment of this serious disease in September of the same year.

Warren Buffett – Interview 2023. What will happen to stocks? Billionaire Tips

Until recently, the legendary investor was in no hurry to invest in enterprises specializing in the development of advanced technologies. He invested in the transport, insurance business and many industries. However, at the beginning of 2016, he already owned 10 million Apple shares worth $1 billion, and in August he increased his stake in the American IT corporation to 15 million ($1.6 billion).