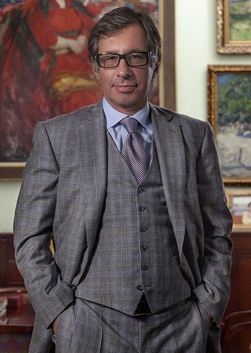 Petr Olegovich Aven is a reformer, philanthropist, business tycoon with total assets of $ 5.5 billion, co-owner and head of Alfa Bank, one of the members of the Alfa Group management, shareholder of CTC Media, professor at the State University Higher School of Economics, Honorary Doctor of the University of Latvia, author of scientific research on professional issues.

Previously, a scientist-economist worked in the government of the Russian Federation, was the head of the Ministry of Foreign Economic Relations, dealt with issues of convertibility of the ruble. He is a curator of charitable projects, a member of the trustees of a number of organizations and societies, including the Museum of Fine Arts. Pushkin, British Royal Academy of Arts.

Childhood and family of Peter Aven

The future financial tycoon was born in Moscow on March 16, 1955, in the family of the head of the laboratory of automated control systems of the Research Institute of Automation and Telemechanics, later Doctor of Science, Professor, Corresponding Member of the Academy of Sciences for Informatics, Computer Engineering and Automation, a teacher at Physics and Mathematics at Moscow State University. By nationality, his dad was half Latvian, half Russian, and his mother, a teacher at one of the capital’s universities, was Jewish.

Peter was brought up, according to him, mainly by his father and Jewish grandmother. For twenty years, since 1937, she was serving a sentence in a camp and exile because of her husband. He was a Latvian rifleman who was shot in the 1930s.

Starting from the 6th grade, Peter was a student of the physics and mathematics special school №2. He called it the most important test in his life, noting the atmosphere of fierce competition reigning there and the high level of training of the teaching staff and students – 22 of Peter’s 25 classmates entered Moscow State University. Among them was he himself.

Petr Aven about his school

The young man became a student of the Faculty of Economics of this university, graduated in 1977 and continued his studies in graduate school. There he studied with Yegor Gaidar and Mikhail Fridman, as well as with all the metropolitan bohemians.

The beginning of the career of Peter Aven

In the period 1981-1988. the young specialist worked in a research institution. Then he signed a two-year agreement and was an employee of the specialized institute in Laxenburg (near Vienna), while simultaneously holding the post of an adviser in the domestic Foreign Ministry.

In 1991-1992, during the years of Gaidar’s premiership, he was in the civil service, holding leading positions in the executive branch, in particular, the first deputy head of the Foreign Ministry. In 1992, he left the civil service.

In 1993, the businessman established the Petra Avena Finance consulting firm, began cooperating with Alfa-Bank, the founder of which was his longtime acquaintance Fridman. At the same time, he was elected to the State Duma from Gaidar’s Choice of Russia party, but gave preference to entrepreneurial activity and refused the mandate.

In 1994, for half the shares of his company, Aven acquired 10 percent of the corresponding securities of Alfa-Bank and became its president. In 1998 he joined the Aviakor and CTC directors’ corps. In 2001, he was elected to the governing body of Golden Telecom (after the bank bought about 44% of its shares). In 2002, the business tycoon became a member of the collective management of CTC Media.

In 2004, according to the largest financial publication Institutional Investor, he was recognized as the best manager in the Russian Federation, and in 2005 he was awarded the Order of Honor.

In 2006, the successful entrepreneur was included in the leadership of the Russian Union of Industrialists and Entrepreneurs, and in 2007 he was delegated to head the Russian-Latvian Council. Analysts named him the 4th in importance and business qualities head of Alfa Group after the founder Mikhail Fridman, heads of structural divisions Alexei Kuzmichev and German Khan.

The banker has been married for over 30 years. But in August 2015, his wife, Elena Vladimirovna, died due to a detached blood clot. The couple raised two children – twins Daria and Denis. They are students at Yale University in the USA.

Most of all, the businessman was concerned with raising children, striving for them to adopt from him the basic set of moral values, including his inherent anti-communism.

Petr Olegovich is one of the most famous collectors, the owner of a large collection of works of fine art of the late 19th – early 20th centuries. Moreover, he always makes the decision to purchase a particular painting himself, having carefully studied the subject beforehand and remembering the advice of his wise Jewish grandmother – not to trust anyone under any circumstances.

Aven is a convinced agnostic, he believes that the main condition for victory in a planned business is a sober idea of ​​the level or meaning of someone or something and a solid self-esteem.

The billionaire’s hobbies include hunting, football, skiing, tennis, poetry, and literature. Of the books he has read and liked recently, the banker noted the novel by Peter Esterhazy “Heavenly Harmony” and Alexander Kabakov “Everything is Fixable”.

Together with his late wife, the billionaire supported various projects in the field of healthcare and education in Latvia in every possible way. In 2011, the couple presented a Steinway grand piano to Raimonds Pauls, which he handed over to the recording studio of Latvian Radio.

Together with Alfred Koch in 2013, Aven published a collection of conversations with famous politicians “The Gaidar Revolution: A First-Hand History of the 1990s Reforms,” ​​where they provoke them to frank statements and honest answers to acute questions about Gaidar’s time.

The business tycoon is a fan of the Spartak football club. In December 2015, after statements appeared in the mass media that he was allegedly included in the FC board of directors, he had to refute them.

Peter Aven about the 90s, Berezovsky and lies

Petr Aven is the largest collector of paintings and graphics of the so-called “Silver Age” (the turn of the XIX-XX centuries), has a collection of more than 1 thousand copies of Soviet porcelain, the largest known collection of Vrubel’s majolica.