Mikhail Fridman started the business back in the late 80s, long before the era of privatization. He is one of the few who not only preserved it over 25 years of “perestroika”, but turned it into the largest financial and industrial group significant for the Russian economy.

Mikhail Fridman is a Russian businessman, ranked second in the 2016 Forbes Russian billionaire rating. His fortune is estimated at 13.3 billion dollars. In the Forbes world list, it is listed at number 63.

Mikhail Fridman is a closed person, emphatically far from politics. He gives few interviews, does not shine on the screens, does not participate in public battles. Many business analysts, both Russian and foreign, call him a brilliant entrepreneur, and the deals he made are considered unique in terms of the scope and size of the brought margin.

He says to himself: “I made mistakes, a lot of mistakes. But I would say this: statistically, the number of correct decisions exceeds the number of errors. Therefore, the overall balance is positive” (Snob interview, November 2015).

Friedman was born and graduated from high school in the provincial Ukrainian city of Lvov. The family was simple, and even the nationality – Jews, was quite ordinary there. Parents worked as engineers, the father was awarded the State Prize of the RSFSR as part of the development team. After graduating from school, he went to Moscow to enter the Physicotechnical Institute, and although he passed the exams for five, he was not accepted. Until now, he believes that the only reason is the “fifth column” in the passport. A year later, he entered MISiS, graduating in 1986.

He studied easily, and between times he managed to do everything in a row. He worked as a loader in a store, stood in line for theater tickets, which were exchanged for scarce goods and useful connections, and organized bard concerts in a student hostel. By distribution, he ended up in Elektrostal, as he himself says, thanks to existing connections, gifts and services. For two years of work, he earned a “odnushka” there, and exchanged it for a “communal apartment” in Moscow. He considers this deal the most successful in his life, and claims that it was more difficult to do this than to create the TNK-BP oil company.

So, energy, dexterity and the ability to make the necessary acquaintances showed up in Friedman from an early age. Interestingly, the degree of usefulness was determined not only by status, he also knew how to create strong friendships. Student comrades: Khan, Kuzmichev, Kosogov – subsequently became his business partners, and shareholders of both the Russian Alfa Group and the international LetterOne Holdings.

The student period includes Friedman’s acquaintance with many people, thanks to whose support he subsequently developed his business: Pyotr Aven (Minister of Foreign Economic Relations under the Gaidar government), Vladislav Surkov (Deputy Head of the Presidential Administration), Alexander Kasyanenko (Trading House “Crossroads”). Friedman knows how to keep in touch for years.

One of Mikhail Fridman’s hobbies outside of business is chess, along with cinema, theater, music and extreme travel (!).

How the “business empire” was built

Friedman practically started his business from scratch. He did not have influential relatives, access to administrative resources. In this he differs from many current oligarchs, who by the beginning of perestroika occupied high positions in state structures or in production. It is all the more interesting to trace the steps that led him to success.

1986 – 1989 – like many others, at this time Friedman tried himself wherever he could. He organized a window cleaning cooperative (“Courier”), then traded in computers. In 1988, he created the Alfa-Eco joint venture for the export of petroleum products and hardware, in 1989 – the Alfa-Photo trading and intermediary enterprise, where he invited his institute friends German Khan and Alexei Kuzmichev to work (now both are billionaires). The company sold everything that was in demand in an era of total shortage: tea, sugar, pasta, car tires and carpets.

1990 – 2000 – a period, the beginning of which was marked by the creation of Mikhail Fridman’s favorite brainchild: Alfa-Bank, in which he headed the board of directors. At the same time, the Alfa Capital check fund was created. In 1994, Petr Aven was invited to the post of president of the bank, who brought him to a qualitatively new level through operations with securities (now a billionaire). The bank developed so rapidly that during the period 1991-1995, Friedman was credited with numerous criminal connections, including charges of drug trafficking, as, indeed, many other entrepreneurs.

According to some sources, the solution is easier. Thus, the media (Novaya Gazeta) published information that carpets, tea and sugar supplied from China and India were partially purchased at the expense of public debt; that Alfa-Bank got access to operations with foreign creditors of Russia, and debts were bought up for a third of their value. A year after the opening of the state program to stimulate industrial exports, Alfa-Eco began to export annually up to 10 million tons of oil, and after the creation of a commission to protect the interests of domestic producers of alcoholic beverages, it became a leader in the sale of Moldovan wines.

Accusations of Alfa Group’s protectionism were made against the future prime minister Mikhail Fradkov (and former deputy Petr Aven), as well as Mikhail Kasyanov. The media refer to this period the acquaintance of Mikhail Fridman with Boris Berezovsky. By the way, the relationship between them did not work out, and ended in the English courtroom.

In 1995, Alfa took part in a mortgage auction for the sale of the state oil company Yukos, but lost the auction. She went to the Menatep holding. At a subsequent press conference, Mikhail Fridman called the commission’s decision “unfair”, and this was the first and last time he commented on his failed deal. In the same year, Fridman joined the board of directors of the ORT television company, in 1996 – the SIDANCO Oil Company, and in 1997 – the Perekrestok trading network. Soon, Vladislav Surkov moved from Menatep to work at Alfa-Bank.

The revenge was taken quickly. Together with Renova (Viktor Vekselberg) and Access (Leonard Blavatnik), Alfa in 1996 acquired a 40% state-owned stake in the Tyumen Oil Company (TNK) at an auction, and a year later all the shares were bought out, and 100 % control over the company. Alfa Group received 50% of the total ownership of the AAR consortium (as the new company called itself).

Alfa survived the 1998 crisis with minimal losses, none of its enterprises were seriously affected. In the post-default period, it became the only company that received a foreign loan from EXIM Bank (USA) in the amount of $0.5 billion. By the early 2000s, it was the largest financial and industrial group in Russia.

Strategy and tactics of Mikhail Fridman

In the business community, Friedman’s manner of doing business is considered aggressive. He is regularly accused of intentionally bankrupting companies and bribing officials. Friedman is not afraid of conflict situations, he prefers to defend the company’s reputation in court, for which he received the nickname “media killer”. During the period 1999-2004, he won at least five lawsuits against Russian and foreign publications. CJSC “MAPT-Media” paid “Alfa” 7.5 million rubles for articles published in the newspapers “Version” and “Pulp Fiction”, and the editor-in-chief lost his position. The German magazine Osten im West was ruined by the amount of compensation paid (200 thousand marks). The Kommersant newspaper paid compensation in the amount of 30 million rubles.

In an interview with Forbes after Mikhail Fridman was chosen as the businessman of the year, he spoke about this as follows: “It is not the conflict itself that turns me on. I don’t like injustice in relation to myself, and I don’t like it in general. ”

Everyone who has dealt with Friedman notes his extraordinary strategic thinking. Despite the rigidity and perseverance, he shows them to a precisely defined limit. If the chance of winning is small, he decisively leaves the game, instantly switching, and directing the available resources to another place. His entrepreneurial talent is best illustrated by the history of the acquisition and sale of TNCs.

Friedman is among those who were the first to feel the wind of change that has blown since the early 2000s in Russia. In 2003, Alfa Group decided to sell half of the shares of TNK British Petroleum. The deal was carried out with the approval of the governments of both countries, and Friedman collected all the prestigious entrepreneurial titles in Europe and the United States. Some analysts believe that this is what he saved the company from repeating the fate of Yukos.

The joint Russian-British venture was named TNK-BP, and the American Dudley was appointed executive director. Friedman found it uncomfortable to work on an equal footing. In 2008, a conflict broke out due to the fact that AAR (the Russian side) refused to agree on the candidacy of the CEO for the next term. Litigation lasted almost a year, and as a result, Friedman took the chair of the managing director. In 2011, a scandal erupted again in the company. Behind the partners’ backs, BP has agreed with Rosneft on a new joint project for oil production on the Arctic shelf. However, the deal fell through. Citing the terms of the contract, AAP sued and BR paid $325 million in legal fees.

Eventually, in 2012, British Petroleum decided to sell its stake in the company. The first buyer was Rosneft, which was led by former Deputy Prime Minister Igor Sechin. While Alfa was negotiating with BP, offering them an IPO and other options for reconciliation, Sechin secured financial support from the largest banks in the country. When it became clear that the deal could no longer be thwarted, Friedman did not begin to fight for the buyout of BP’s stake, but calmly announced the sale of his shares. He refused the offer to become a shareholder of Rosneft. TNK, bought in 1996 for $3 billion, was sold in 2013 for $54 billion, $14 of which went to Alfa Group. This transaction is considered the largest in the history of Russian business. 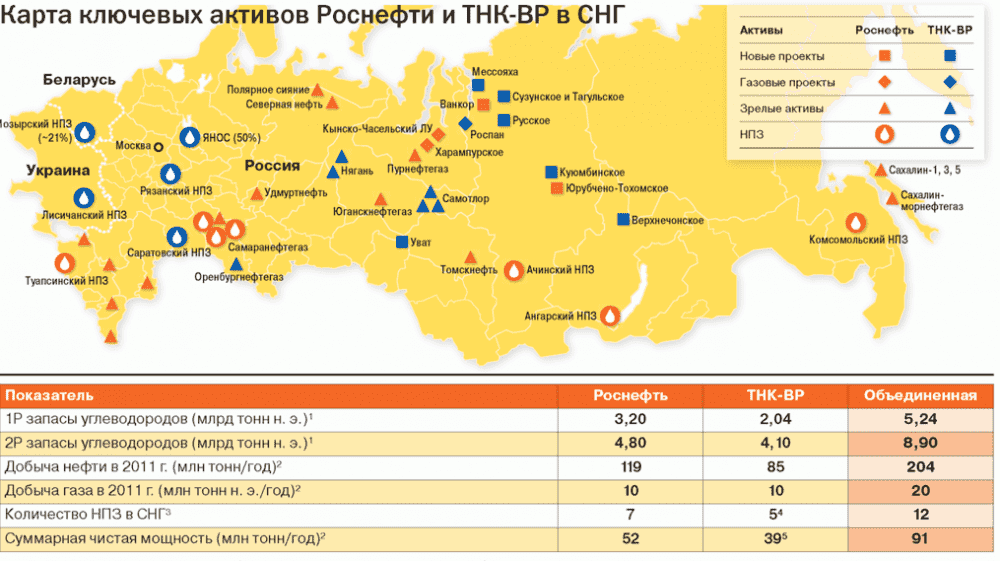 The position and status of TNK-BP’s assets at the end of 2011, before the sale of the company.

After the sale of TNK, in the same 2013, Fridman and partners created the international company LetterOne Holdings (Lone). LetterOne Investment Holdings SA was spun off from it in 2015, where the assets of Vimpelcom (Beeline) were transferred.

The holding invests in the energy and telecommunications sectors. In the spring of 2015, he acquired the German oil company “Dea”, and intends to create an international business, considering all the oil and gas regions of the world, including America, the Middle East and Asia. According to Vedomosti, the company’s profit for 2015 amounted to 15 billion dollars, which is 1.5 more than a year earlier. Friedman invested $200 million in Uber in early 2016. He is attracted to technically modern ideas.

The British Financial Times writes about him: “Some experts believe that Friedman will be coldly received in the West when he tries to diversify assets outside of Russia. But Friedman has many friends in high places who will pave the way for him. Lord Browne, head of Friedman’s new L1 Energy oil and gas venture, praised him this week, calling him “stubborn, hard-working, one of the most astute and driven businessmen I know.”

Billionaire Mikhail Fridman says if the international community really believes sanctions on oligarchs like him will persuade Putin to stop the war, “we’re all in big trouble” https://t.co/QJEe2LGXGj via @BW