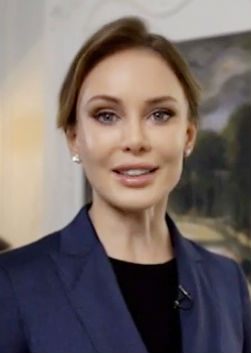 Popova Natalya is a top manager at Innopraktika, an ombudsman for protecting the rights and interests of leading high-tech companies, a host of television programs about science in Russia and the wife of Kirill Dmitriev, head of the Russian Direct Investment Fund.

In the photo: Natalia Popova

Popova Natalia Valerievna studied in Moscow. Has two diplomas of higher education. The first one was received at the Financial Academy under the Government of the Russian Federation. This is one of the leading Russian universities that trains economists, lawyers, sociologists and specialists in the field of information systems. She also graduated from the Faculty of Foreign Languages ​​and Regional Studies at the Moscow State University named after M.V. Lomonosov, which is rightfully considered the center of Russian science.

Natalia Popova works at Innopraktika. He is the first deputy head of the company. The Non-State Development Institute was established in 2012. It unites the National Intellectual Development Foundation and the National Intellectual Reserve Center based at Moscow State University. Its main goal is to create comfortable conditions for the work of researchers and scientists, to unlock their potential.


At Innopraktika, Natalya Popova is involved in the creation of projects that stimulate the growth of human capital in the Russian Federation. She argues that it is necessary to involve students, graduate students and graduates in the development of innovative products. Employment of young scientists, support for project activities and assistance in the implementation of new ideas – all this will help preserve the human resources potential of domestic science.

Today, Innopraktika is an integration mechanism that brings together representatives of the scientific and business communities. It ensures effective interaction between science and industry, thereby contributing to the development of an innovative economy in the Russian Federation. This structure has collected about 900 project proposals and successfully implemented more than 100 projects for partners.

Ombudsman for the protection of high-tech companies

Russia has created an ombudsman institution for the protection of leading high-tech companies. Natalya Popova, the top manager of Innopraktika, has become a human rights activist for enterprises in the field of innovative technologies. She took up this position in December 2019. She will have to defend the interests of various organizations and businessmen, who have been awarded the status of “national champions” by the Ministry of Economic Development. Also protected will be members of the Association of Fast-Growing Technology Companies that work to create technical innovations, grow and expand rapidly.


The high-tech ombudsman will promote public policy measures aimed at developing the IT sector. Popova is faced with the task of eliminating systemic problems, revising strict regulatory requirements, introducing benefits and preferences, providing financial support to enterprises and improving conditions for realizing the potential of scientists and achieving high results in the field of information technology.

Natalya Popova can be seen on the TV channels “Russia 24”, “Culture”, “Science 2.0”. She is the initiator and host of various programs about domestic scientists and scientific activities aimed at popularizing science in the Russian Federation. The most successful are the “House of Scientists”, “Science”, “New People”.

Natalya Popova is engaged in educational activities on TV