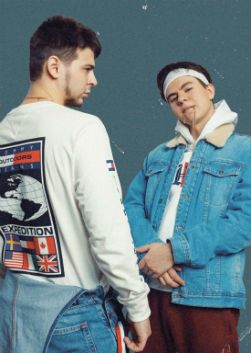 GAYAZOV$ BROTHER$ (The Gayazov Brothers) is a duo of brothers Timur and Ilyas Gayazov, performing musical compositions in the style of rap, hip-hop and deep house. The group is known for hits “Credo”, “See you on the dance floor” and “Drunken Fog”. Gained popularity through the Internet, without the support of labels and media.

Timur and Ilyas created their group on October 1, 2013 in the city of Kazan. The younger Timur (born in 1998) acted as a songwriter and performer, the older Ilyas (born in 1995) acted as a co-author and producer. Both brothers received medical education, but at that time they worked as loaders and dressed in second-hand clothes. In their free time, they rode in a car, listening to Ivanushki International. Timur took the pseudonym Tonbo Tobitake, and Ilyas – RIPMAN.

The Gayazov brothers before becoming famous


The guys posted the first songs on the VKontakte social network. The mood of the tracks was sad and lyrical. The brothers suffered from depression and hoped that gloomy songs would help get rid of it. But the songs did not help to get rid of experiences, they did not bring money and fame either.

The brothers have tried many styles, including rock. Finally, on January 18, 2015, the track “Bring pure, golden love back into fashion” scored 14285 positive reviews and 272 reposts on the social network.

On March 14, 2016, a video of the same name appeared on YouTube, which quickly gained 150 thousand views, although it was filmed “on the knee”: on an amateur video camera, in home interiors. In the same month, Maya Morozova recorded a cover of the brothers’ song “You are beautiful, like mother’s eyes.”

In the wake of the success of the song and video, the Gayazovs earned enough to move to Moscow. In the capital, they recorded the album “Bring back my pure love” with their own money, which was released on February 15, 2017 and included 9 tracks. The group gained many new fans, whom the brothers called “samurai”.

In 2016 the brothers moved to Moscow


March 29, 2018 GAYAZOV$ BROTHER$ released THETWIX album, which became another step on the way to popularity. Now the brothers analyzed the trends and created songs in accordance with the wishes of the listeners. According to them, they started making music for people, not for themselves. It is this approach, in their opinion, that characterizes a good musician. In October 2018, the new track “Credo” took second place in the Russian iTunes chart. The brothers spent a month’s salary on the promotion of the song on the Web. Ironically, initially the Gayazovs were not going to record this song at all. They went to the studio to record the track “Yakuza” and invited their friends along. Along the way, they realized that it would take three hours to record and that their friends would get bored. “Credo” was simpler, and they recorded it.


On February 22, 2019, the group’s debut professional video “See you on the dance floor” was released. The director was Alexander Romanov. According to the plot, the main character got into the virtual world, where he was looking for his beloved.

Brothers Gayazov – See you on the dance floor

On March 15, 2019, the album “Credo” was released under the banner of the Warner Music Russia label. Critic Aleksey Mazhaev from Intermedia noted that the lyrics are naive, but after repeated listening, the songs become hits. He also criticized the band’s name, written in all-caps with a dollar symbol instead of an “S”. In his opinion, such logos went out of fashion back in the 90s.

The Gayazov brothers became a hit on the dance floors


On March 31, the duo performed at the Proryv festival, other headliners were Serebro and Anacondaz. The concert was held at the small sports arena “Luzhniki”, the audience saw a light show using modern laser and projection technology.

In April 2019, the group announced a competition among fans for the best script for the “Credo” video, which eventually gained 40 million views on YouTube.

On May 26, the brothers performed at the Reebok festival, which was held on the territory of the Kolomenskoye Museum-Reserve. Master classes and sports events were held within the framework of the festival. For August, the band has scheduled a small tour of Germany, performances in Cologne and Dortmund.