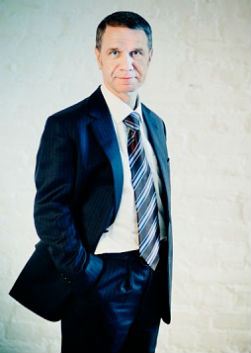 Fedor Olegovich Turkin – Chairman of the Board of RosStroyInvest Group of Companies. Since 2010, he began to conduct political activities in the St. Petersburg branch of the Patriots of Russia party, coordinated the project for the development of low-rise construction “Own House”. He is the founder of the public movement “Immortal Leningrad”, is a member of the Union of Industrialists and Entrepreneurs.

Fedor Turkin was born and raised in Leningrad. Memories of childhood often take him to the tragic times of the Great Patriotic War, which also affected his family: his grandfather died at the front in 1941, his grandmother became a hostage to the blockade of Leningrad.

From early childhood, Fedor Turkin dreamed of helping people, especially those who suffered from the inhuman moloch of war. Not the last role in the formation of his sense of patriotism and fortitude was played by his parents. The boy’s father, Oleg Turkin, was a military man and, as they say, “for the soul” played the trumpet. The mother of the future entrepreneur taught at school, and to a greater extent it was she who was raising her son.

During Fedor’s school years, the Turkin family often had to move because of the military career of the head of the family. It was at this time that the boy literally fell in love with music. Fedor did not have the opportunity to study it at a professional level, since there were simply no music schools in the military garrisons. Nevertheless, music accompanied him all his life, despite the fact that Turkin linked his fate with the construction industry, because, according to him, architecture is frozen music. After graduating from school, Fedor entered the VTUZ of the Leningrad Metal Plant, which he successfully graduated in 1981, having mastered the specialty of a mechanical engineer.

In the same 1981, Fedor Turkin began working in the Turbobuilding software for specialized education. Years of study and the applied diligence allowed the novice master to quickly grow to a senior engineer. A few years later, he was offered the position of a process engineer at the All-Russian Research Institute of Electric Welding Equipment, where Turkin worked until 1988, until he decided to go into business.

Since 1988, Fedor Turkin, despite the lack of experience in the construction industry, together with his wife, was organizing repair work in small areas. For 10 years of work, their small company has gained trust and gained wide popularity in St. Petersburg.

So in 2001, Turkin decided to “up the stakes” and invested in the construction of residential buildings. In 2002, he headed the company CJSC RosStroyInvest, making the happy future of potential clients the leitmotif of its activities.


One of the first projects was a 35-storey building in Rybatsky called “Prince Alexander Nevsky”. All names for residential complexes are selected individually: according to the businessman, it is clear that they often come to him on their own, due to surprising coincidences. So, for example, the Strawberry Glade complex got its name from the song “Strawberry Fields Forever” by the businessman’s favorite band, The Beatles. And sometimes the names are a direct association with the location of the complex, such as the “Old Fortress” on Oboronnaya Street.

“Morning Star”, one of the projects of the company “RosStroyInvest”


In 2010, Turkin became a member of the Patriots of Russia party. And in 2012, the businessman was awarded the title of Honorary Builder of Russia.

Being the head of one of the most successful construction companies in St. Petersburg, Fedor Turkin did not forget about his main passion – music. Every month, on his initiative, creative evenings are held for the company’s employees with the participation of actors and singers from St. Petersburg theaters and philharmonic societies.

Fedor Turkin is not only a successful entrepreneur; an important part of his life is social activity. In 2016, he initiated the creation of the Immortal Leningrad patriotic social movement. According to him, the project, which has become a natural continuation of the all-Russian movement “Immortal Regiment”, is designed to preserve the memory of generations of Leningraders.

Fedor Turkin on the creation of the Immortal Leningrad project

The site of the public movement “Immortal Leningrad” is a census of the fate of the siege. Everyone who witnessed those tragic 872 days of the siege, everyone in whose family memories of the siege of Leningrad are passed down from generation to generation, can contact the volunteers of the movement to add another page to the history of the immortal hero city.

Fyodor Turkin at the procession of the “Immortal Regiment”


Free from business and politics, Fedor Turkin devotes time to music. Not so long ago, he presented his musical creations to the audience of the St. Petersburg Conservatory, which the audience accepted with enthusiasm. In one of the interviews, Turkin admitted that he has been composing music since childhood, notes literally come to his head from nowhere and, if they are not immediately recorded, they disappear just like a weightless hummingbird, so he always writes down the preparations of the future piece of music on the recorder.

Fedor Turkin does not stop at the achieved level and constantly improves his company and his hometown. The businessman pays special attention to the development of children: RosStroyInvest is engaged in the construction of cultural and educational centers at each residential complex. In them, children can engage in music, acting, martial arts, creativity, foreign languages, robotics, etc.

The company also plans to build churches and temples. According to Fedor Olegovich, the temple is the path to God, and together with God, a person can overcome any difficulties. In addition, the businessman actively helps the elderly and people who find themselves in difficult life situations.