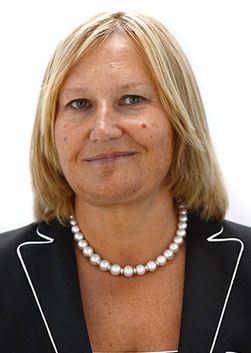 Elena Nikolaevna Baturina is the richest woman in the Russian Federation, billionaire, ex-owner and co-founder of one of the largest capital business empires Inteko, chairman of the supervisory board of Inteco Management, widow of the mayor of Moscow Yuri Luzhkov, who was dismissed in 2010.

She is the creator of the international high-class hotel chain, including the Grand Tirolia complex with a golf course in the Austrian ski resort of Kitzbuhel, the New Peterhof hotel in the Northern capital of Russia, a hotel as part of the new generation Moscow-Park business center in Kazakhstan (Astana ), QuisisanaPalace in the Czech Republic (Karlovy Vary), Morrison Hotel in the capital of Ireland.

In 2016, the businesswoman again, for the fourth time, topped the list of the richest women in the country according to Forbes. This publication estimated her finances at $ 1.1 billion. In 2008, according to the same magazine, she owned $ 4.2 billion.

The first Russian woman billionaire was born into a Moscow working-class family on March 8, 1963, seven years after the birth of her brother Viktor. Parents, Tamara Afanasyevna and Nikolai Yegorovich, were ordinary Soviet workers, worked at the Fraser plant and lived in a house on Sormovskaya Street, where they gave out apartments to the plant workers.

Elena attended the same secondary school as her older brother. The neighbors described her as a businesslike and strong-willed girl who had no time to engage in stupid things. She studied and helped her parents with the housework. After graduating from school, Lena entered the evening department of the Institute of Management. Sergo Ordzhonikidze, where Viktor Baturin also studied earlier.

In 1980-1982. the girl worked at the largest enterprise of cutting tools “Fraser”, at the same time she received higher education at the Institute of Management. Sergo Ordzhonikidze. It did not work otherwise – the family lived in poverty.

Later she became an employee of the Institute for Economic Problems of the Development of the National Economy of the Capital, head of the secretary department of the Union of Cooperators, and a member of the Moscow City Executive Committee commission for cooperative activities. In 1986 she received her diploma.

When in 1987 Elena Baturina met the future mayor of Moscow, her heart was occupied by another young man, a gymnast. At first, she had only a working relationship with Yuri Luzhkov. He was the second person in the executive committee of the Moscow City Council, where the 24-year-old graduate, who dealt with the problems of the cooperative movement, came to work.

According to Elena, the first impression Yuri Mikhailovich made was a bossy one, but at the same time she already decided that she would become the wife of this man, who strictly distinguishes between personal and professional life. The boss appreciated Elena’s leadership qualities and became close to her, but only in a friendly sense of the word. Luzhkov was married, but in October 1988 his wife Marina died of cancer. In 1991, Baturina moved to Luzhkov’s home, and three months later they got married.

Despite the difference in age, the spouses were similar in temperament and shared their views on life, so they lived in perfect harmony. In 1992, their eldest daughter Elena was born, two years later – Olga. As for the sons of Luzhkov from his first marriage, the elder Mikhail took his stepmother, who was younger than himself, into hostility, while the younger Alexander quickly found a common language with her.

In the summer of 1991, Yuri Luzhkov headed the Moscow Government, and a year later he was appointed mayor of the capital to replace Gavrila Popov, who resigned due to problems with food supplies. It is not surprising that Baturina’s success in business is often associated with the high position of her husband. However, Elena started doing business even before the start of relations with Luzhkov.

Baturina’s first business enterprise was launched in 1989. Like many enterprising Soviet citizens of the late 1980s, she partnered with her brother Viktor to found a cooperative. There was a desperate shortage of money, and the company was engaged in everything it had to: selling equipment, installing and developing software, and organizing jobs.

In 1991, my sister and brother founded the Inteko company, whose area of ​​interest initially included the production of polymer products. The company quickly occupied this niche: according to experts, in certain categories of plastic goods Inteko produced about a quarter of the total production. Ten years later, the company’s field of activity included commercial real estate, construction and investments in shares of the largest state-owned enterprises, including Gazprom, Oskolcement, Atakaycement, Sberbank.

The company provided financial support in the implementation of projects in the field of education, culture, art, sports, including international golf tournaments. Elena Baturina initiated the initiative “Home by the Whole World” (the program provided housing to urgently needy Russian families in different cities), sponsored equestrian competitions (Elena was the president of the specialized Russian Federation of Equestrian Sports). In 2006, she was promoted to Deputy Head of the Interdepartmental Team on the National Affordable Housing Program.

2006 was the most successful year in the life of Inteko – the company received 27.6 billion rubles in net revenue.

Viktor Baturin served as vice president of Inteko until he was fired in December 2005, and Baturin learned about the dismissal from the newspapers. No official reasons were given. One of the possible reasons for the conflict, the media called Viktor’s claims due to insufficient compensation for his stake in Inteko (until May 2002, he owned 25% of the shares, and then all reports indicate that 99% of the shares belong to Elena Baturina). It was reported that in return, Baturina gave her brother half of the stake in the subsidiary company Inteko-Agro, and thus he received the company at full disposal. However, over the next few years, the cost of Inteko, according to various estimates, is 3-4 times.

Victor Baturin about his sister Elena Baturina and Yuri Luzhkov

Since 2007, Elena Baturina has revived the tradition of our artists performing abroad, created in 1907 by Sergei Pavlovich Diaghilev and named “Russian Seasons”. So, in 2008, with her assistance, in Austria, concert performances of domestic dance groups, classical musical works, and folk songs took place, timed to coincide with Orthodox Christmas.

In 2009, Inteko completed the construction of the Moscow-Park multifunctional complex in Astana. The complex included shopping and entertainment and business centers, a panoramic elevator, restaurants, cafes, office space and a 4-star hotel.

In 2010, Elena Nikolaevna opened the New Peterhof hotel complex in the Northern capital; within the framework of assistance to victims of fires, she financed the construction of a preschool educational institution in the Tula region, sold the Russian Land Bank to foreign investors.

In 2010, Forbes ranked Elena as the third richest woman in the world with her fortune of $ 2.9 billion.

99% of Inteko shares belonged to Elena Baturina until 2011. After the resignation of Yuri Luzhkov in 2010, the company’s annual revenue fell by almost 2 times. Inteko for 600 million dollars was acquired by a subsidiary of Sberbank (Sberbank. Investments) in partnership with financier Mikail Shishkhanov.

In 2011, information was made public about the donation by the billionaire to the Tsaritsyno Museum of porcelain from the Imperial Factory from her personal collection.

After the sale of Inteko, Elena Baturina went into the hotel business. In 2012, it became known about the opening of the Quisisana Palace hotel in Karlovy Vary, in 2013 – the Morrison hotel in the capital of Ireland.

Elena Baturina about her business in Europe

Since 2010, Elena Baturina has also been involved in the development business. In addition to Russia, she sponsors projects in the United States, Cyprus and Kazakhstan. In 2016, she acquired a number of office buildings in the New York City area of ​​Brooklyn, near the Barclays Center. In 2023, it is planned to complete the construction of an elite 23-apartment building in the capital of Cyprus, the cost of investments in the project exceeded 40 million euros. Among Baturina’s projects in Kazakhstan is the luxurious Moscow business center.

As noted above, Yuri Luzhkov and Elena Baturina got married in 1991. The husband, for whom their marriage became the second, was 27 years older than her. The couple raised two daughters – Elena (1992) and Olga (1994).

Before Luzhkov left the post of mayor, they were both students of Moscow State University (the eldest daughter studied at the Faculty of World Politics, the youngest at the Faculty of Economics). In 2011, the girls moved with their mother to the British capital, where they continued their education at University College London.

Olga also earned a bachelor’s degree from New York University and a master’s degree in hospitality. In 2015, a woman with her usual marketing savvy opened her own bar, Herbarium, in Kitzbühel, near Grand Tirolia. In the new establishment, Baturina tried the long-standing idea that such an establishment could be a place where you can not only drink, but also enjoy herbal drinks in a comfortable environment.

Elena Baturina’s eldest daughter is doing business in Slovakia, a country with a rapidly developing economy. She founded the Alener company in Bratislava, whose main field of activity is the development of cosmetics and perfumery.

The ex-mayor of the capital has always considered his wife a super talented person. In 2016, on the 25th anniversary of their marriage, the couple got married in a church.

Elena Baturina loves equestrian sports, is fond of tennis, golf, alpine skiing, collecting photographs, works of art (in particular, she owns a canvas by the English artist Francis Bacon) and classic cars (she has about 50 vintage vehicles in her fleet).

The entrepreneur is engaged in the hotel business, the acquisition and construction of real estate (in the USA, in the UK), together with her husband – the management of the Weedern horse breeding concern. She finances a number of charitable organizations – “Noosphere” to provide disinterested assistance in education, tolerance for other faiths, lifestyles, customs, Be Open to promote progressive ideas of young creative people in different parts of the world.

On December 10, 2019, Yuri Luzhkov died in a Munich clinic due to complications that began after a successful heart operation. Elena Baturina, accompanying her husband, plunged into a state of shock. At the funeral of the former mayor, the woman, as reported by the press representatives present at the ceremony, was in a stupor with grief.

Yuri Luzhkov’s legacy consists of a 450-meter apartment in the center of Moscow, in a building built at the beginning of the 20th century on 3 Tverskaya-Yamskaya Street. Realtors have valued the property at $ 600 million. It is reported that it will be divided among themselves by the widow and children of Yuri Mikhailovich.