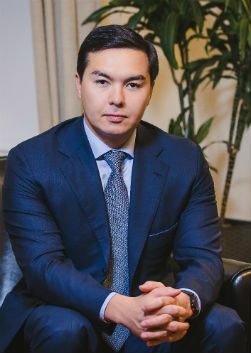 Nurali Aliyev was born in the city of Alma-Ata in the family of the eldest daughter of the President of Kazakhstan, Nursultan Nazarbayev. His father, Rakhat Aliyev, was a politician and businessman. Dariga Nazarbayeva, Doctor of Political Sciences, Candidate of Historical Sciences. Parents instilled in Nurali a love of learning, science and sports. He studied hard and hard, distinguished himself by successful studies at his school. Now he is actively interested in football, hockey, boxing and tennis.

Years of study of Nurali Aliyev

Nurali Aliyev graduated from a Kazakh school, and after that he received higher education in several universities, both in his native Kazakhstan and abroad. From 2001 to 2002 he studied at Pepperdine University of California, in 2002-2003 at the Austrian International University of Vienna.

A year later, Aliyev decided to return to his native Kazakhstan to continue studying there. In 2005, he received a bachelor’s degree from the National Pedagogical University of Almaty with a degree in economics and finance.

After graduating from the Abay University, Nurali Aliyev again went to Austria. There he entered the master’s program with a degree in business administration and successfully graduated from it. The next step in Nurali Aliyev’s studies was the EMBA course at the McCombs School of Business at the University of Texas.


In 2004, he was appointed to the position of President of JSC “Sugar Center”. During his stay in this status, the company with an internal annual turnover of 350-400 thousand tons also exported its products to Russia and Central Asia. At that time, the “Sugar Center” produced 90% of all sugar products in Kazakhstan.

A few years later, Nurali got his first management experience in the banking sector. He was appointed Chairman of the Board of Directors and First Deputy Chairman of NURBANK JSC. Also, for five years, being a member of the board of the Development Bank of Kazakhstan, he worked as a managing director of the bank.


Noting the excellent potential and a wide range of products and services of the Kazakhstani market, Nurali Aliyev founded the venture capital company Capital Holding, which has been successfully investing in various areas of the Kazakhstani economy for more than 10 years – the hotel business, the media, telecommunications and precious metals.

In 2013, Nurali Aliyev was appointed President of Transtelecom JSC, one of the largest telecom operators in Kazakhstan, which specializes in providing a wide range of telecommunications and infocommunication services. As head of this company, Nurali Aliyev established and secured new partnership agreements between Transtelecom and global IT holdings Huawei and HP, thereby expanding the range of IT and smart services provided by the company.


Career of Nurali Aliyev in the civil service

In 2014, Nurali Aliyev entered the civil service and was appointed to the post of Deputy Akim of the city of Astana. In this position, for two years he was engaged in attracting investors to the industrial and innovative sector of Astana, supervised the development of transport infrastructure, innovative development, tourism and entrepreneurship.

The time of his tenure as deputy akim of the capital of Kazakhstan, first of all, was remembered by the holding of the international investment forum “Astana Invest 2015”, which was attended by more than 3,500 delegates from 56 countries of the world. For the first time in the history of his young country, the world’s largest media holding CNN International acted as the general information partner of the forum. One of the most famous invited guests and speakers of the forum was the American billionaire Jim Rogers.

In general, Nurali Aliyev’s policy in relation to the areas he supervised was quite logical and simple – the implementation of projects with the involvement of investors and the maximum unloading of the state budget.

So, during his work in the akimat in Astana, several smart projects were introduced in a pilot mode, the capital’s Intelligent Contact Center 109 was introduced, a large-scale modernization of the transport infrastructure of Astana was carried out – separate bus lanes for public transport Bus Lane were introduced, warm stops for citizens, started construction of the LRT, as well as free wireless internet in city buses. In 2016, he wrote a letter of resignation, as he decided to return to the business field.

The ZHANARTU Foundation was founded by Nurali Aliyev together with his wife Aida Aliyeva. His charitable foundation identifies and supports young IT talents, allocates grants for talented students in IT specialties and supports Kazakhstani innovative IT startups.

The marriage of Nurali Aliyev was a logical continuation of school love with Aida Imasheva. It is known that Nurali and Aida have known each other since the first grade. He made the decision to marry her when he was 18 years old. For 14 years he has been happily married to Aida Aliyeva. On September 17, 2015, the fourth child, the son of Anuar, was born in the family. At that time, the couple had already raised and raised three children: son Alan and daughters Laura and Amira.

According to Nurali Aliyev, he has always been interested in the development of the Kazakhstani IT market and the search for new ways to promote it. Therefore, after leaving the post of Deputy Mayor of Astana, he explored the possibilities of the IT market and its prospects, as well as the support of the young IT generation in Kazakhstan.

In May 2017, Nurali Aliyev’s ZHANARTU charitable foundation acted as the general partner and sponsor of the Technovation challenge International IT competition in Kazakhstan. As a result, two teams from Kazakhstan went to the global finals in San Francisco among more than 70 participating countries.

In July 2017, Nurali Aliyev was elected President of the Federation of Mountaineering and Sport Climbing of the Republic of Kazakhstan, which has been operating since 2006 and is a member of the International Climbing Federation IFSC. This Federation participates in the formation of national teams of the Republic of Kazakhstan and the preparation of athletes for participation in international championships, competitions and mountaineering expeditions.