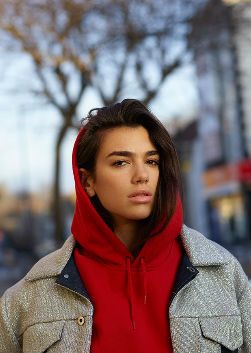 Dua Lipa is a former model and now a star of the British pop scene. Her musical career began in 2009 with cover versions of songs by other artists, but soon the girl’s independent work won the love of listeners all over the world thanks to the singer’s deep, non-standard voice and her outstanding appearance.

Dua Lipa was born on August 22, 1995 in London. Her parents, ethnic Albanians from Kosovo, emigrated from Pristina to the capital of Great Britain, fleeing the horrors of the civil war unleashed in Yugoslavia. A significant place in the subsequent formation of Dua as a singer was played by her father Dukagjin Lipa. He was a famous rock musician in Pristina and, as a creative person, in love with beautiful melodies and songs, he became the first guide for young Dua Lipa to the world of music. Together they listened to hits by Bob Dylan, Sting, David Bowie and other talented performers.

The name of the future singer, given to her from birth, means “love” in translation. Dua, although she did not like this name in childhood, got used to it and by the time she entered the big stage she did not take any pseudonym.

Dua Lipa with her parents

Dua Lipa as a child


In 2008, after the declaration of Kosovo’s independence, Lipa’s family went back to Pristina, where the very next year Dua began actively running her YouTube music channel. Her first experiences were cover versions of songs by Nelly Furtado and Christina Aguilera.


At the age of 15, Dua Lipa left her father’s house and returned to London with the goal of starting a serious musical career. However, at first she has to work as a waitress and a model in order to be able to pay for a rented apartment, rented together with friends. There was a time when she worked on the face control of a nightclub, and the singer later called this experience “terrifying.” Without a doubt, the girl could prove herself in the modeling business, her attractive appearance and suitable height of 173 cm helped her in this, but still Dua aspired to a completely different scene.


Several significant factors helped Dua Lipa start her career as a singer. This includes meeting the famous musician, the author of the single “New Age” Marlon Roudette, who advised the aspiring vocalist to record her own songs and post them on open platforms. In addition, the YouTube channel mentioned above also drew attention to Dua.

In 2015, 19-year-old Dua Lipa signed a recording contract with Warner Music Group. This event marked the beginning of her dizzying musical career. In the same year, the singer’s first two singles (“New Love” and “Be the One”) were released, which soared into the top ten of the European charts.


Already during this period, Dua Lipa’s musical style took shape, which she herself defines as “dark pop”. Her music actively uses electronic rhythms and synthesizers, and the arrangement most often includes electric guitars, drums and piano. Music critics and fans note the passion, expression and courage that is felt in every song of Dua.

Although the first studio album entitled “Dua Lipa” was released only on June 2, 2017, by that time the British singer was already widely known in Europe, North America and Australia. The singles “Last Dance” (February 18, 2016) and “Hotter Than Hell” (May 6, 2016) made it possible to gain popularity in the UK, and “Blow Your Mind” (August 26, 2016), in turn, appealed to listeners in North America.

Music critics and fans note the passion, expression and courage that is felt in every song of Dua.

A significant moment in the singer’s career and a kind of symbol of her recognition in most of the world was Dua’s participation in the opening ceremony of the Champions League football final at the Olimpiysky Stadium in Kiev on May 26, 2018. In front of the assembled audience, the vocalist performed with the single “New Rules” mentioned above.

Separately, it is necessary to mention that in 2018 Dua Lipa won the prestigious British music awards ceremony “Brit Awards” in two categories at once – “Breakthrough of the Year” and “Best British Performer”.

An important fact in the biography of the singer is that she remained indifferent to the problems of her native Kosovo. Having learned from the history of her family the full gravity of the fate of a refugee and a displaced person, the girl, together with her father, founded the Sunny Hill Foundation charitable foundation. The purpose of the organization is to help people in need – both refugees and residents of Pristina and other cities of Kosovo.

Dua Lipa is single and has no children. The singer is quite closed in the matter of personal relationships and never gives information about her men. This is partly the reason for the numerous rumors, gossip and scandals associated with the name of Dua.

Dua Lipa has a beautiful figure


According to her fans, the girl very often changes her suitors. In addition to his alleged relationships with model Isaac Carew and Paula Klein, a musician from the band Lany, Dua was suspected of having links with Coldpay’s Chris Martin and DJ and vocalist Calvin Harris. After the end of the Champions League final in Kiev, numerous articles appeared in the press about the sudden, turbulent and extremely fleeting relationship between Dua Lipa and Real Madrid star player Marco Asensio. However, the girl soon published a refutation of these rumors on her pages on social networks.

In 2019, Dua Lipa opened up about her relationship with Bella and Gigi Hadid’s brother, Anwar Hadid. He is 3 years younger than the singer – at the time the relationship began, he was 21. The couple regularly appears together, and in the summer of 2023, the singer and her boyfriend celebrated their first anniversary.

In 2019, Dua Lipa’s career took off even more – the girl became the face of Libre perfume from Yves Saint Laurent, and also released the single Don’t Start Now, which announced her new album and hit the top of the Billboard 100. On March 27, 2023, Dua Lipa released a new album Future Nostalgia. It includes 11 tracks that combine several musical genres, including disco, pop, and electro. In April of the same year, the album Future Nostalgia hit fourth place on the American Billboard 200 chart. Some time later, the singer also presented a video for one of the songs from the album, Break My Heart.

In support of the new record, Dua Lipa had a Future Nostalgia Tour planned – it was supposed to take place in the spring of 2023, but due to the coronavirus pandemic, it was postponed to January 2023. As part of the tour, the singer will visit England, Germany, Scotland and other countries.