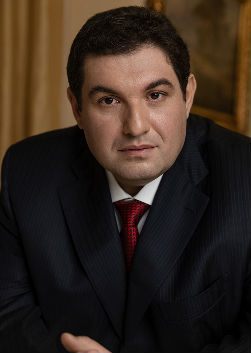 Denis Petrovich Katsyv is a Russian businessman and entrepreneur who implements projects in the transport industry, as well as in residential and commercial real estate. Its structures have a reputation of reliable and stable partners.


Transport is a business

The transport sector was one of the earliest applications of private business in the history of mankind: as soon as the first wagons were invented, the first commercial transportation appeared. Even the Soviet Union, with its intolerance of human initiative, failed to exterminate the “private traders”, “bombers”, who were taxiing all over the Union without any permission. It is not surprising that as soon as socialism went to another world, business began to actively develop the transport sector.

One of the most famous entrepreneurs in the Moscow region, Denis Katsyv, did not participate in this process: he was born in 1977 and in those years he was just finishing school. Then there was – in his father’s footsteps – the Moscow Automobile and Road Institute, which he graduated in 1999. After that, he faced a dilemma – to go under the wing of his father or try to start his own business. The young man chose the latter.

Denis Katsyv and his father Peter


In the 2000s, it became clear that it makes no sense for state and municipal enterprises to maintain a huge material and technical base for their transport needs – it is much easier and cheaper to order the corresponding services from private businesses. It was in this niche that the future entrepreneur Denis Katsyv saw himself.

“Mosobltrans-1” – the basis of the system

It is clear that his starting position was very advantageous: he was lucky with his biography. The father, the general director of Mostransavto, later the Minister of Transport of the Moscow Region, could afford to invest in the projects of his only son. It is also clear that in the stormy sea of ​​the transport business, Katsyv

Denis did not swim blindly: his father’s connections and acquaintances came in handy. But from a certain moment, when it became clear that the business turned out, went, Denis Petrovich Katsyv began to act as an independent figure. The main application for his remarkable energy was the management of Mosobltrans-1, a major player in the market of corporate transport services and car rental of all types.


Cars and drivers of Mosobltrans-1 can be seen not only in Moscow and the region, but also in various regions. 25 dump trucks of the company even climbed to the Far North, providing the construction of roads to oil fields. There is hardly a task that is beyond the power of the impressive fleet of this brainchild of an entrepreneur.

Mosobltrans-1 LLC is known for its social initiative to organize public transport for pensioners who want to admire the sights of Moscow and the region. Especially for them, Denis Petrovich Katsyv purchased a new comfortable autoliner MAN Lion’s Coach in 2019 – a luxurious 12-meter bus, which now hosts various excursions.

It is not surprising that Mosobltrans-1 has a whole bunch of various awards, for example:

Details of the big puzzle

But this is far from the only direction of Denis Petrovich’s activity. Lists of business projects are usually rather boring, but we will try to list in an extremely concise manner other activities of this multilateral entrepreneur.

The company “Inavto”, in which Katsyv owns a 30% stake, logically complements the services provided by “Mosobltrans-1” – it provides vehicles on lease. Buses “Inavto” run in six regions of the country, and it is quite possible that this number will grow.

One of the last elements of the automotive puzzle is a 40% stake in the Agro company, which maintains and repairs vehicles. Together, these three organizations provide a full range of services in the trucking market, harmoniously complementing each other. Adjacent to them is also the company Global Trans Logistic (Katsyv has 37.5%), which is engaged in the storage, warehousing and transportation of goods.

But if there is transport, there is a repair base, then there must be real estate for all this. Therefore, Katsyv acquired a 37.5% stake in Tekhnostroy LLC, which manages and leases non-residential real estate. The main asset of the company is an elite (A+) warehouse complex in the small town of Fryazino near Moscow, 12,600 sq. m which was chosen by such reputable companies as Gazprom Neft – Lubricants, May Tea, Huhtamaki and others.

Katsyv is also successful in the management of residential and hotel real estate. His name is associated with the Mittens cottage village near Losiny Ostrov (neighbors know him for the excellent sports and recreation complex), as well as the Plaza Spa Kislovodsk hotel, which during the time of the entrepreneur collected a good collection of awards, including Travelers’ Choice 2015 from Tripadvisor and “Best Russian spa-hotel 2014”. Unfortunately, in 2017 Denis Petrovich decided to withdraw from the capital of the hotel management company.

Denis is also engaged in foreign projects. Entrepreneurship has never been an easy task anywhere. Expanding business in different directions and countries, experimenting in various areas, in 2013 the name of Denis suddenly appeared in the context of a suspect and practically accused in the United States.


They wrote in the news: structures connected with Katsyv Jr. were charged with actions allegedly aimed at money laundering through the Cypriot company Prevezon Holdings (let’s be honest – half of Russian business is under Cypriot jurisdiction). The prosecutor’s office argued that the American assets of the entrepreneur could be related to the legalization of illegal income and therefore they should have been seized.

However, further investigation showed that the structures of Denis Petrovich and his partners did not commit any criminal intentions, let alone illegal actions. Moreover, no credible evidence of this was found and presented. All claims of American justice against the Russian businessman have been completely removed.

Considering that Katsyv Sr. – Pyotr Dmitrievich – has not been working in motor vehicles since 2012 (and in 2014 he generally went to “competitors” – to the post of vice-president of Russian Railways), and Denis’s mother Lyudmila worked as a teacher all her life, it is understandable that Denis stuffed his bumps himself, and he also achieved his success himself.

Unlike many children of high-ranking parents, Katsyv Jr. no longer needs to prove his personal wealth, separate from his family, on all fronts. He has proven everything to everyone. Not resting on his laurels, he continues to achieve success in management science.

In 2007, Denis defended his dissertation on a topic close to him “Automated system for monitoring and analyzing the technical and economic indicators of the activities of industrial enterprises and the transport complex”; moreover, he is the author of five scientific papers, mainly related to the principles of information processing and its application in management.