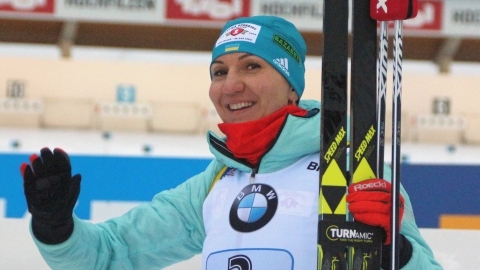 Sports career. In favor of the Kolos sports society. The first and current coach is Igor Pochinok, the coach (of the national team) is Evgeny Kolupaev.

At the 2011 World Championships in Khanty-Mansiysk, she won silver in the 4×6 km relay, but due to an anti-doping rule violation by Oksana Khvostenko, the International Biathlon Union deprived the Ukrainian women’s relay four of the second place.

At the 2013 World Championships, she received 3 medals: gold in the sprint, silver in the relay and bronze in the pursuit.

After the Olympic Games in Sochi, she took a break from sports and resigned from the Lviv State University of Internal Affairs.

Since April 2014 – Deputy Minister of Youth and Sports of Ukraine.

On March 26, 2015, she decided to return to biathlon and left the post of Deputy Minister of Youth and Sports of Ukraine.

Narada. She was awarded the Order of Princess Olga II and III degrees.