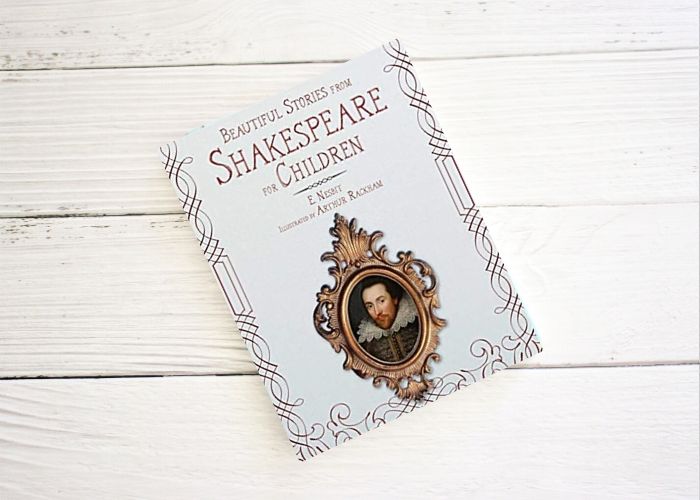 I have noticed that there is some controversy about E. Nesbit’s Beautiful Stories From Shakespeare. There seems to be two popular opinions.

It seems that people are either all for it, or not for it at all.

E. Nesbit always felt that children should be introduced to Shakespeare in an easier and more enjoyable way. She thoughtfully included a glossary of difficult names in the plays and a guide on how to pronounce them which can be found at the end of the book. She also included a section at the beginning of the book about William Shakespeare life. Another useful inclusion is a collection of memorable quotations from the plays.

Her book includes a retelling of:

I for one do not argue with either of the above arguments. Beautiful Stories From Shakespeare is one of the best retold versions of Shakespeare’s plays. However, when writing it, she did leave out quite a bit of the context of the plays.

I have read and listened to the entire book several times. I have also read other retold versions to compare, and here is the conclusion I came to:

It All Depends on the Audience

When she wrote it, she took complex storylines conjured up by a mastermind playwright, and made them simple enough for young readers to understand.

E. Nesbit created a form of Shakespeare that still captures the essence of the plays, still includes all of the important stuff, but gives young children the opportunity to appreciate them.

You wouldn’t hand your six-year old the original version of Hamlet, would you? He probably would understand any of what going on, even if you read it to him. E. Nesbit created a way for you to introduce Shakespeare to your young children.

What About the Other Versions?

Both of these versions go a little more into detail, and are defiantly lengthier. There are the next step up from E. Nesbit’s version, while still being gentler and easier to understand than William Shakespeare original plays.

Back to E. Nesbit’s Version

E. Nesbit’s Beautiful Stories From Shakespeare is a gentle means of introducing your children to the famous plays. To prepare them for the richer and more detailed plays themselves.

Another bonus about Beautiful Stories From Shakespeare is the prologue. The entire prologue is about William Shakespeare himself. It is written in an approachable way for children.

So, back to the original question. To read, or not to read? Well, that is entirely up to you. I think it is fair to say that Beautiful Stories From Shakespeare is very simplified, and shortened, but it is also a very handy tool for introducing your kids to Shakespeare.

I hope you found this post helpful. If you did, then please consider sharing it and checking out our other posts. If you or your children have read Beautiful Stories From Shakespeare by E. Nesbit, then please share your thoughts in the comment section below.