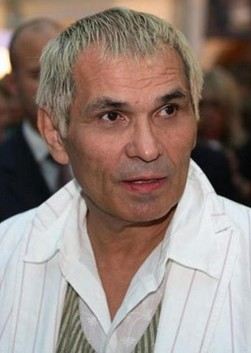 Bari Karimovich Alibasov is a music producer, creator of the Na-na group, one of the first Russian boy bands, and the Integral team.

Bari was born in the post-war years, in the small town of Charsk (Shar in Kazakh) of the Semipalatinsk region, Kazakh SSR. Less than a hundred kilometers away was the Semipalatinsk test site, where nuclear weapons were tested. The only attraction and center of attraction in Charsk was the railway station.


The boy became the fourth child in a large family. In total, the local bank manager Karim Kasymovich and the accountant Iraida Ibragimovna had five children: in addition to Bari, the girls Zoya and Roza and the boys Bulat and Gaziz grew up in the family. By nationality, Bari is half Tatar (by mother), a quarter Khakassian and a quarter Kazakh (by father). The town was very poor, and the Alibasov family was considered wealthy – they had bed linen and a governess from the Germans repressed by Stalin in their house.

Since the parents worked hard, came when the children were still sleeping, and left when they were already in bed, the kids were left to their own devices. Their parents brought them up in strictness, and every day from 6 in the morning the children did housework, because they knew that if the work was not done, they would be whipped with a belt upon their return. Since then, Bari hates gardening and does not even get pets.

Bari Alibasov in his youth


The love of music was passed on to the boy by his mother. She loved to dress up her four-year-old son in Tatar folk costumes and teach him to sing and dance. Later, Bari developed his talent in the school choir, led various events, tried to play the drums and even led the theater group. At the same time, the young man’s academic performance was lame, he grew up as a noble hooligan, and was expelled from school several times.

However, the reason for this was not so much bad behavior as passion for music. Together with his comrades, Bari put together an amateur orchestra and performed with the repertoire on neighboring collective farms. In the end, the teachers’ council was fed up with the constant absenteeism of young musicians, and the meeting raised the question of expulsion. After promising that this would not happen again, Bari returned to his studies.

After graduation, Bari married his school friend Svetlana. The hasty marriage was unhappy. Soon the couple quarreled, and Alibasov left for Ust-Kamenogorsk – he cherished the dream of becoming an architect, and in this city there was a strong construction university.

He managed to enter, but the dream never came true – his passion for architecture gave way to musical passion. Bari founded the Integral jazz quintet, where he invited his institute friends to play. The team was popular among students. The young man had to unlearn one semester before graduation, when the Kemerovo Regional Committee invited Integral to perform on tour in Transbaikalia. Bari accepted the offer, left the university and went on a tour of provincial cities. They became the pioneers of the big beat music movement, which was gaining popularity among the youth. Note that Bari was shy of his nationality, so he performed under the pseudonym Boris.

Bari Alibasov while serving in the army


In 1969, Alibasov voluntarily joined the army. The reason was the unrequited love for Aza Romanchuk, who played with Integral. She loved all the men who came into her field of vision, except for Bari. This offended him, and one day the musician impulsively bought a ticket to Alma-Ata and came to the local military registration and enlistment office. He was sent to the infantry, to a unit on the border of Kazakhstan and China, but six months later he was transferred to a military ensemble.

The musician played in a military ensemble


In 1971, Alibasov returned to civilian life and continued his “integral” activities. In the same year, the team received official certificates of the instrumental ensemble. .

Bari was a pioneer – he created effects on stage that looked unusual for that time: pyrotechnics, plastic, film fragments, stage decorations, light … Each performance on stage was a real spectacle. Journalist Ella Fedoseeva was shocked by what she saw and decided to make the group famous outside the East Kazakhstan region at all costs. In 1977 the group moved to Irkutsk. At the same time, 23-year-old Yuri Loza joined them.

Soon the Integral was known all over the USSR. The rock group, despite the prohibitions of the authorities, performed at large concert venues in Leningrad and Moscow, made its way to television and radio. When the first official Soviet rock festival “Spring Rhythms” was held in Tbilisi, “Integral” took third place (the first went to “Time Machine”, and the second – to the group “Autograph”).

The group existed for 25 years, during which time they managed to experiment in different musical styles: fusion, blues, rock and roll, country, psychedelic rock and forever inscribed themselves in the history of Russian rock.

By 1988, Alibasov had already moved away from the idea of ​​​​further developing a rock group, believing that rock music had outlived its usefulness, had become stereotyped and intrusive. At this time, he had the idea of ​​u200bu200bcreating a new youth group according to the patterns of a new stage – like “Tender May”. Earlier, on his advice, Major Shishinin created the Combination group, who adopted Alibasov’s production experience, and the experiment was a success.

Bari Alibasov in his youth


To implement his idea in 1989, Bari announced a competitive recruitment of young performers. Having selected the best soloists from the mass of applicants, he organized the Na-na group, which included Vladimir Levkin, former Integral members Marina Khlebnikova and Valery Yurin. Soon, the first performance of the young group took place at the Face to Face festival, followed by their participation in a concert the other day in Prague in Moscow. The group was named “Discovery of the Year”.

Only nine months have passed since the appearance of the group, as it was already in almost all charts. In the first half of the nineties, “NA-NA” was considered the most successful musical project in the country. It was the youth’s favorite group.

Initially, the composition of the group changed, and the main five was established only by 1992. However, in 1995, one soloist left the group with a scandal. Alibasov prepared a new program with the team and went on a world tour.

The group still exists today. She has big plans for the future, in particular, a new repertoire has been prepared, fresh arrangements for old songs. The guys are working, experimenting with different styles.

The soloist of “Integral” was incredibly loving. He had only 5 “official” attempts to start a family, and even more girlfriends with whom he did not register relations with the registry office. Bari Karimovich says that, parting with a woman, he crosses her out of life. For creativity, he just needs to be constantly in love – this fuels interest in life and gives energy.

For the first time, Alibasov married almost immediately after school, he and his school friend Sveta were 18 years old. The family broke up very quickly – after only 3 months of marriage, the couple separated.

The second time he applied to the registry office at the age of 30, already being a notorious rock musician. The wife was 12 years younger than Bari. The union did not work out – the life of the head of Integral was far from the image of an exemplary family man, and his wife complained about him to the party committee, saying that he was leading a wild life. Alibasov could not forgive such a betrayal.

The third marriage turned out to be short – this time the fault lay at a great distance between Moscow, where Alibasov’s chosen one lived, and Saratov, where the musician lived. A similar story came out with the fourth wife: immediately after the wedding, Integral went on a long tour, and the young wife did not put up with the constant absence of her betrothed. Bari specifically does not advertise the names of the first four official wives, believing that they did not play an important role in his life.

In the photo: Elena Uronich


In the mid-80s, Bari Alibasov became a father – his common-law wife Elena Uronich gave him a son. The relationship with her lasted 2 years, but after parting, the musician did not disappear from the life of his son, he helped with money, and when the boy turned 14, he moved him to Moscow.

Bari Alibasov with his son


In 2013, the producer made another attempt to start a family. His choice fell on 26-year-old Victoria Maksimova, who worked for the artist as a PR director. A little later, the woman gave birth to a son, Ivan. However, as it turned out on Andrei Malakhov’s talk show, it turned out that Bari was not the father of the child.


Finally, in 2018, Bari married Lydia Fedoseyeva-Shukshina. With an actress, 9 years older than the producer, Alibasov met in the mid-90s at the Nika film award. Then a romance broke out between them, which lasted 4 years. After the wedding, Bari told reporters that he had maintained warm relations with Lydia all this time.

On June 4, Bari Alibasov ended up in intensive care due to an absurd set of circumstances. Someone (perhaps the staff) left a glass of liquid on the table in his apartment. The producer, thinking it was water, drank the contents in one gulp – a deadly pipe-cleaning liquid for humans – and received a IV degree burn of the esophagus, a II degree stomach burn, and an injury to the respiratory tract.


The next day, reports appeared on the Web about the death of the producer, which turned out to be disinformation, but Alibasov’s condition was assessed as serious. Bari celebrated his 72nd birthday in intensive care.