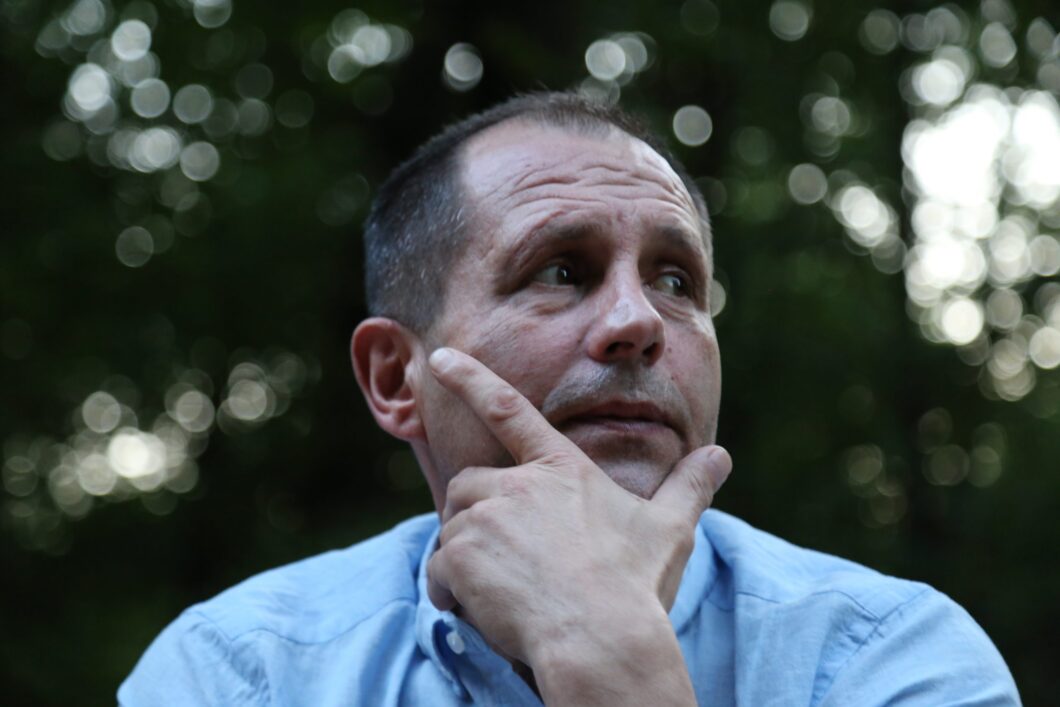 Place of Birth. Education. Vladimir Balukh was born on February 8, 1971 in the village of Serebryanka, Razdolnensky District, Autonomous Republic of Crimea, Ukraine.

He studied at the Agricultural University of Simferopol, then worked as a water conservation engineer at a local collective farm. Today Vladimir Balukh has two plots of land on which he grows wheat, as well as a large household.

Volodymyr Balukh defiantly refused to obtain Russian citizenship, remaining a citizen of Ukraine after March 2014. He is known for his pro-Ukrainian position. Balukh was constantly subjected to pressure from the employees of the occupation power structures and the local occupation administration, in particular for hanging the flag of Ukraine on his house and for participating in pro-Ukrainian actions.

On November 29, 2016, Vladimir Balukh placed a sign “Street of Heroes of the Heavenly Hundreds 18” on the wall of his own house, which the Russian occupation authorities demanded to be removed.

The pursuit by the occupation authorities of Crimea. On April 30, 2015, the house of Volodymyr Balukh was searched by the occupation authorities, during which the Ukrainian flag was removed from the roof of the house. The reason for the search was a statement about the theft of spare parts for a T-74 tractor in the village of Chernyshevo, which is located 30 kilometers from Serebryanka.

On June 10, 2016, Vladimir Balukh was convicted by the Razdolnensky District Court under Art. 319 of the Criminal Code of the Russian Federation (“Insulting a representative of the authorities”) up to 320 hours of compulsory work due to the fact that he allegedly insulted a police officer who took part in the search of his house on November 14, 2015. Vladimir Balukh was “suspected” of stealing a VAZ-2106 car. During the “search” Vladimir Balukh was beaten up by the occupational security forces. Despite the fact that the sanction of this article does not provide for imprisonment, by the decision of the Razdolnenskiy District Court of October 11, 2016, the sentence was changed to 40 days of imprisonment with serving the sentence in a colony-settlement.

On December 8, 2016, in the house of Natalya Balukh, the wife of Vladimir Balukh, in the village of Serebryanka, Razdolnensky district of Crimea, FSB officers carried out an operational-search action “Survey of the premises”. In the course of which, in the attic of the house, 89 “military” cartridges of 5.45 × 39 caliber, manufactured in an industrial way, were allegedly found, of which 19 were suitable for shooting. On the same day, a criminal case was opened against Vladimir Balukh under Part 1 of Art. 222 of the Criminal Code of the Russian Federation (“Illegal possession and carrying of firearms and ammunition”), Balukh was detained.

On December 12, 2016, by a decision of the Razdolnenskiy District Court, a preventive measure in the form of detention for a period up to January 6, 2017 was chosen against Vladimir Balukh. The court ignored the fact that the procedural documents were drawn up with significant violations.

On December 12, 2016, representatives of a number of human rights and other public organizations appealed to the leadership of the Ukrainian state with an appeal to accept all political, legal and diplomatic means to save compatriot Volodymyr Balukh.

The Ministry of Foreign Affairs of Ukraine has condemned the extension of the arrest in Crimea to a citizen of Ukraine Volodymyr Balukh.

On June 16, 2017, the Razdolnensky District Court ruled to extend the detention until September 4, 2017. The court did not see any violation of the right to defense in the absence of one of Vladimir Balukh’s lawyers, and removed the defendant’s sister from the courtroom, who called the case fabricated. The employees of the FSB of Russia, who were previously summoned as witnesses, again did not appear in court, without submitting documents confirming the reason for their absence. The judge refused to demand this evidence from the FSB.

On August 4, 2017, the Razdolnensky District Court of the annexed Crimea sentenced Vladimir Balukh to 3 years and 7 months in a general regime colony. In the last word, the activist said: “I don’t want my descendants, children of all Ukraine, to reproach me for being scared somewhere, showing weakness”.

October 2, 2017 the verdict of the Razdolnensky District Court was cancelled, and the case was returned for a new trial.

January 16, 2018single controlThe Razdolnensky District Court of Crimea, which was under the occupation regime, sentenced Vladimir Balukh to three years and seven months in prison and a fine in the equivalent of about 4.5 thousand hryvnias.

On March 14, 2018, the Kremlin-controlled Supreme Court of Crimea changed the sentence of the Ukrainian activist Volodymyr Balukh, reducing the prison sentence by two months.

On March 14, 2018, Balukh went on an indefinite hunger strike: “On March 14 of this year, when another thoroughly false verdict in the case fabricated against me acquired” force “, I decided to go on a hunger strike of protest, as a manifestation of my personal contempt for the occupation regime and their pitiful attempts to imprison all those who disagree at all costs with their Horde-FESB “ideology of” man-hatred “, – wrote Balukh…

On September 7, 2019, it was returned as part of an exchange between Ukraine and the Russian Federation.