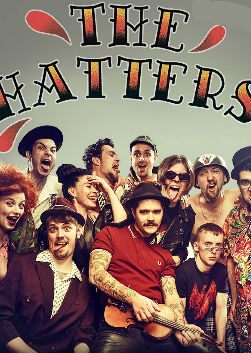 Biography of The Hatters

The Hatters is a creative musical group from St. Petersburg, which in two years won the hearts of a multi-million audience with its artistry, powerful positive energy and original musical style, which the band members themselves characterize as “Russian-gypsy street folk alkohhardcore on soulful instruments.”

The founder, ideological inspirer and frontman of the group is Yuri Muzychenko. The future musician was born in St. Petersburg and from an early age demonstrated his outstanding creative abilities. He loved to attract attention to himself, joked, “tricked” on classmates and friends in the yard and was a permanent organizer of all sorts of pranks and undertakings.

In the photo: Yuri Muzychenko


At the age of twelve, he created a rock band with friends, in high school he worked part-time in the theater as a stage technician. After school, he entered the acting department of the St. Petersburg Academy of Arts, where he mastered playing the violin, piano and other musical instruments. After graduating from high school, he joined the troupe of the Lyceum Theater.


There Yuri met accordionist Pavel Lichadeev and bassist Alexander Anisimov. The guys became friends and began to spend a lot of time together – they drank, rehearsed, made creative plans. On one of these evenings, the idea was born to perform in one of the St. Petersburg clubs. The concert went off with a bang, and the guys became frequent guests of the city’s musical parties.

Sources of inspiration and features of musical style

All members of the band are “fans” from Balkan music, the work of Emir Kusturica and Goran Bregovic and films in the style of Guy Ritchie and the Coen brothers, which could not but affect their work. Gradually, the guys developed their own musical style, which was a kind of mix of folk and punk rock, generously flavored with eccentricity and theatrical performances. And the presence on the stage of the musicians’ wives – Anna Muzychenko and Anna Lichadeeva – gave the newly minted group additional charm and gypsy enthusiasm. The idea of ​​creating an unusual team, which in its manner of performance looks more like a noisy farce, was warmly supported by the members of the Little Big Family creative association, led by their permanent leader and inspirer Ilya Prusikin, an old friend of Muzychenko and colleague in the ClickKlak Internet project.


It was decided to call the band The Hatters for several reasons. Firstly, the guys liked to wear hats, and even indoors, which attracted attention and stood out from the crowd. Secondly, they themselves liked to use the word “hat” in different contexts, most often replacing them with more emotional linguistic constructions.

In the fall of 2015, the musicians organized a big solo concert at the Muzychenko tattoo studio, which brought together the entire St. Petersburg beau monde. With the money they earned, they recorded the song Russian Style in a professional studio and posted it on the Web on February 23, 2016. The track caused a great resonance and collected a huge number of likes. At the same time, Yuri began to blog on YouTube, in which he covered the process of creating songs, posted fragments of concerts and all sorts of behind-the-scenes “jokes”, which further fueled interest in the group.

The Hatters in full force


At the end of spring, the Hatters went on a tour of Russia, and in the summer they became participants in the festivals Wild Mint, Dobrofest, Invasion and many others. In early autumn, their songs were already played on the country’s leading radio stations, and joint concerts with Little Big gathered thousands of people in Moscow and St. Petersburg.

Kaifman (from the Wild Mint Festival)

In September, the band’s debut video for the song “I’m Not Easy Buddy” appeared on YouTube. The video, shot by Alina Pyazok with the participation of Ilya Prusikin and the Little Big Family team, turned out to be bright and incendiary. He became part of an advertising campaign for the new Samsung smartphone (it was stated that the video was filmed entirely on his camera). A month later, the Hatters presented to the audience their first official video for the song “Russian Style”, which by that time had already become the hallmark of the group.

The Hatters – I’m not easy, buddy

On November 7, 2016, the musicians performed as the opening act for their idols Emir Kusturica and Goran Bregovic at a concert in St. Petersburg.

The heyday of a musical career

The day before the beginning of 2017, the group released their debut EP “Stay True”, and three weeks later the single “Winter” was presented to the public. It was dedicated to the deceased father Muzychenko and turned out to be very touching and lyrical. And even though he collected fewer views than the previous two, in the comments, people thanked the musicians for the “goosebumps” and strong emotional emotions that this composition caused them.

In February, the Hatters celebrated the band’s anniversary by giving a concert at the Litsedei Theatre. It was attended by the Little Big group, stand-up comedian Danila Poperechny, as well as theater artists.

The Hatters – Out From Within

In April 2017, the first studio album of the Full Hat group was released, which they presented in the Evening Urgant program, performing the song “Yes, it’s not easy with me.” In the summer, the Hatters went on tour in Russia, visited the Wild Mint and Invasion festivals, where they presented a new song, Kaifman, to the audience.

In December 2017, the group’s second studio album “Forever Young, Forever Drunk” was released, consisting of 9 tracks. A video was shot for the song of the same name, skillfully mounted against the backdrop of American landscapes and has traditionally gained several million views on YouTube. Later, the musicians inserted a fragment of the video and the brightest comments into the video clip for the song “NO RULES”, which, as expected, refreshed the public’s interest.

Ilya Prusikin, a professional psychologist and advertiser who is well acquainted with the laws of marketing, has resorted to this PR move more than once. Muzychenko himself has repeatedly noted in his interviews how grateful he is to his “big brothers” from Little Big, who provide the Hatters with all possible support and do not let them go astray in the stormy ocean of Russian show business.

In July 2018, the official presentation of the group’s third official compilation “No Comments” took place, consisting of instrumental versions of all previously released tracks. It is worth recognizing that the musicians decided on a risky experiment, given the album’s timing and the complete absence of lyrics. With this collection, the Hatters wanted to emphasize that in their work the priority belongs to music, which, although it should create an atmosphere of “alcoholic intoxication” and “alco-hardcore”, is at the same time an art capable of awakening bright feelings in people’s souls.

The Hatters – Talking to Happiness

The Hatters song “Conversation with Happiness” was included in the soundtrack to the New Year’s comedy “The Year of the Pig” with Alina Alekseeva and Alexander Yatsenko.