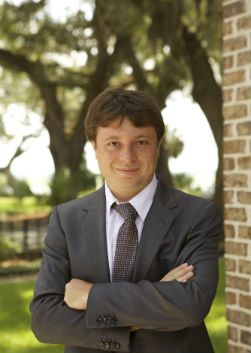 Sergey Vladimirovich Khotimsky is known as a businessman, co-owner of Sovcombank PJSC and a philanthropist. Born April 12, 1978 in Moscow. He is a citizen of the Russian Federation. From scratch, he created a commercial bank, which today is considered one of the largest in Russia.

In the photo: Sergey Khotimsky

Sergey Khotimsky received his secondary education at a school with a mathematical bias. In his school years, he wanted to become a lawyer, so he entered the International University in Moscow (MUM). In 1999 he defended his diploma and graduated from the university with a degree in jurisprudence.

While studying at the university, Sergei Khotimsky and other students registered their first business. It was a small law firm engaged in consulting and auditing. Young lawyers offered paid legal advice to clients. They worked not only with the population, but also with various companies.

Their services were in great demand, since at the end of the 90s there were few specialists in the field of jurisprudence and law in the country. Many law school graduates entered the labor market by the middle of the 2000s, when Sergei Vladimirovich Khotimsky already owned a bank and developed a business in the banking sector.

Sergei Vladimirovich Khotimsky began banking in 2001. The impetus for this was advising a client who bought a stake in a bank. The deal was successful for both the lawyers and the buyer. In addition, the partners plunged into banking and studied it well. After that, it was decided to buy a minority stake in a financial institution on their own.


Sergei Khotimsky and partners bought out Buikombank. It was a small bank in the town of Bui, which is located 100 km from Kostroma. Subsequently, it was renamed Sovcombank. The financial institution gradually expanded the geography of its activities and introduced new products to the market. The main activity was unsecured lending. Thanks to him, the bank managed to increase its capital by 20 times.

In 2007 PJSC Sovcombank attracted investors from the Netherlands. Thanks to the perfect deal, the bank received a network of credit agencies operating in Siberia. The staff of Sergey Khotimsky’s company has increased to 1200 employees. Bonds of large organizations and consumer loans allowed the bank to survive during two financial crises that engulfed the entire banking sector of the Russian economy.

Under the leadership of Sergei Vladimirovich Khotimsky, Sovcombank grew rapidly and strengthened its position in the market. The financial institution served mainly clients of retirement age, with whom competitors did not want to work. The bet on pensioners turned out to be winning, as older people almost always repaid loans. In 2015, Sergey Khotimsky carried out the transformation of the bank and developed mortgage and car loan programs.

Two years later, customers were also presented with the Khalva installment card, which is a unique product on the Russian market. Today, Sergei Khotimsky and his brother own more than 30% of the shares of Sovcombank PJSC. The banker participates in the operational management of the credit institution as First Deputy Chairman of the Board.

Sergei Khotimsky not only manages the bank, but also does charity work. He founded the Future Now Foundation, which runs programs to support orphans and families who take them into foster care. Thanks to the “I want to go home” project in the Kostroma region, the number of children left without parental care has halved in three years.

Sergei Khotimsky devotes a lot of time to charity


More than 200 children of different ages found loved ones and found a home. The amount of funds raised by the fund for the implementation of the charitable project amounted to more than 100 million rubles. The Governor of the Kostroma Region awarded Sergei Vladimirovich Khotimsky with an honorary badge “For Charity”.

Sergei Vladimirovich Khotimsky recalls his first income with a smile. At the age of 14, he took a place in the queues for other people for money. The businessman’s financial sense manifested itself in his youth.

In the early 2000s, the future banker acted as a producer for the Polygon film studio. With his participation, the popular Russian comedy “DMB” was created, which was highly appreciated by the audience. The success of the film, which paid off at the box office, prompted its creators to work on a sequel and a television version of the picture.

The main hobby of Sergei Khotimsky is collecting old walking sticks. The businessman has over 300 luxurious men’s accessories from the past. His collection is represented by antique models with beautifully decorated handles and is considered one of the largest and richest in Russia.

Sergei Khotimsky has a wife. The businessman has two daughters.