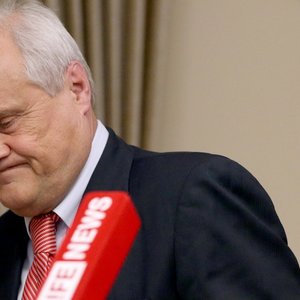 Berlin and Paris on the “Saidik plan”: Useful when the time comes

Martin Sajdik - Austrian diplomat, Permanent Representative of Austria to the United Nations since 2012. Since June 22, 2015, the Special Representative of the OSCE Chairmanship has been a member of the Trilateral Contact Group on the implementation of the peace plan in the East of Ukraine.

Career. In 1975 he entered the Austrian diplomatic service, holding positions in various departments of the Ministry of Foreign Affairs until 1978.

From 1978 to 1980 - Second Secretary of the Permanent Mission of Austria to the United Nations Office in Geneva.

From 1980 to 1985 he worked at the Austrian Embassy in Moscow as an adviser and press officer.

From 1986 to 1987 - Head of the press department of the Commission for Security and Cooperation in Europe in Vienna.

From 1989 to 1991 - Advisor and Deputy Head of Mission at the Austrian Embassy in Moscow.

1991-1994 - worked in the Austrian construction company Maculan Group as director of international business at Maculan Holding. He was also a member of the Board of Directors of Maculan International GmbH and General Director of a joint venture in Yakutsk. From 1994 to 1997 he headed the property management department.

From 2003 to 2007, Sajdik worked as Director General for Economic Affairs and European Integration at the Ministry of Foreign Affairs.

From 1997 to 2003 - Head of the European Union Enlargement, Trade, Trade Relations outside the EU and Central Asia.

Since 2007, Sajdik has served as the Austrian Ambassador to China, Mongolia and the Democratic People's Republic of Korea.

Since June 22, 2015 - Special Representative of the OSCE Chairman in the Trilateral Contact Group on the implementation of the peace plan in the East of Ukraine.