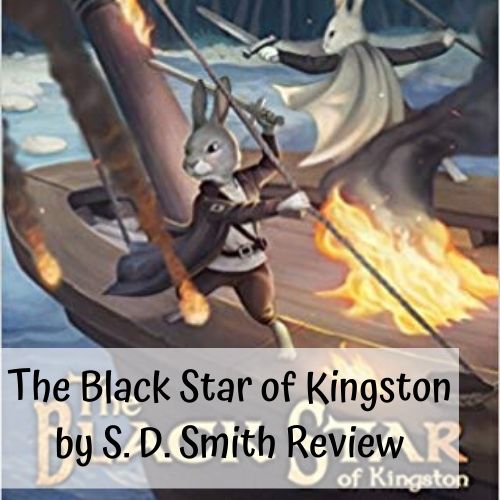 The Black Star of Kingston by S. D. Smith

S. D. Smith’s Green Ember series has caught the attention of many avid readers since the first book in the series was published in the year.

The series in order of publication goes as follows:

Introduction | Before the Review

The Black Star of Kingston

Book 0.5 of The Green Ember Series

Book attributes to be aware of: Violence.

The Black Star of Kingston by S. D. Smith is the prequel to the previously published book The Green Ember. It is the tale of what happened before the prologue in the Green Ember, in which a young rabbit, a Black Star (coal miner) gets together a company known as the Black Star company. Together with the king of Natalia and his men, the Black Star company sails across a river to some mountains beyond where they hope to find coal. They come upon coal, as well as some very eerie shrieking, which later turns out to be giant monster birds.

As the story unfolds we see more and more action. Beginning with nothing more than a big scare, by the end of the book we witness a gigantic battle between some hideous giant monster birds, and the much smaller Black Star Company. Many of the rabbits are wounded and killed, the rest flee for their lives. As we can determine from this small excerpt:

“He didn’t wait for them to find him. He drew his sword and leapt. Swinging wildly, he met the enemy aloft. His strokes, all but one met air. The one found a black breastplate. It’s owner clawed at Fleck as he fell. Two sets of talons tore at him, and then the birds veered off. He fell, spinning into the water. Battered and cut, he plunged below the surface… He saw several knots of fighting rabbits, their swords slicing the air. The deck was littered with the fallen…”

The Black Star of Kingston is well written. It is very different than a lot of kid’s books, in the sense that it really does display the ugly without a lot nice to go with it.

There are times when there is happiness and carefree attitude shown, but it is scarce. This may be because it is the very beginning of the journey. We must remember that to make a good story there must be a problem. The characters must experience trial. It can’t all be lollipops and unicorns.

This story holds some very useful qualities. It can teach children that there is darkness in the world, but that there is good too. This story can also teach perseverance, loyalty, honesty, comradery, and above all hope.

The one quote that can be found throughout the entire book is an oath cried by the black star company before battle to the king:

“My place beside you, my blood for yours! Till the Green Ember rises, or the end of the world!”

Thank you for reading my review on The Black Star of Kingston.

I would enjoy hearing about your experience with the book, and what you thought of it. Feel free to write in the comment section below!