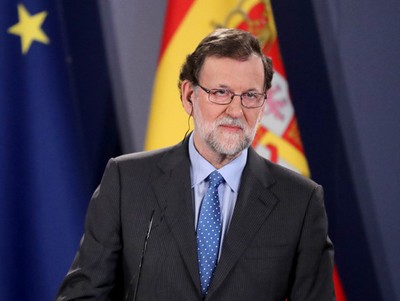 Place of Birth. Education. Mariano Rajoy was born on March 27, 1955 in Santiago de Compostela, Spain. He is the grandson of one of the authors of the Statute of Autonomy of Galicia of 1932, who was suspended from teaching at the university during the dictatorship until the early fifties, and the son of the president of the provincial court of the city of Pontevedra, where he grew up.

Certified Lawyer. In his last year of law at the University of Santiago de Compostela, he prepared for the position of real estate registrar, which he took after graduation at 24, thus becoming the youngest registrar in Padron (Galicia), Vilafranca del Bierzo (Leon) and Santa Paula (Alicante).

Political career. With the support of José Luis Barreiro, in 1981 Rajoy joined the People's Alliance (Alianza Popular; since 1989 the People's Party) and was elected to the local parliament in the first elections in the autonomous community of Galicia, held in the same year.

In 1982, Rajoy was appointed General Director of the Liaison Committee of the Government of Galicia and Secretary of the Commission for Transfers between the State and the Autonomous Community of Galicia. In the municipal elections of May 1983, Rajoy was elected a member of the legislative council of the city of Pontevedra. In 1986, he was appointed President of the Legislative Council of the Province of Pontevedra, a position he held until 1991.

In the 1986 general election, Rajoy received a parliamentary mandate in the Congress of Deputies, heading the electoral list for Pontevedra. However, already in November, as a result of the crisis and the resignation of José Luis Barreiro and other members of the Junta of Galicia, he was forced to give up this position in order to take the place of Vice President of the Government of Galicia. At an extraordinary party congress in May 1988, Rajoy was appointed general secretary of the Popular Alliance branch in Galicia.

In the 1993 elections, the People's Party became the main party of the opposition camp, and Rajoy regained the parliamentary mandate of the representative from Pontevedra.

On March 3, 1996, the People's Party won the elections. Rajoy was appointed Minister of Public Administration.

In January 1999, Rahoy was appointed Minister of Education and Culture.

In the 2000 general election, the People's Party won an absolute majority in Parliament. Rajoy, as in previous elections, led the election campaign and was therefore appointed First Deputy Prime Minister and Minister of Aznar's administration.

Since February 2001 - Minister of the Interior.

In January 2002, at the party congress, Rajoy was again re-elected as deputy general secretary of the party. In July of this year, he resigned from the post of Minister of the Interior and received the portfolio of the official representative of the Government and Minister of Administration of the Prime Minister.

On September 3, 2003, he resigned from all positions held, as José María Aznar nominated him for the post of general secretary of the NP and candidate for the presidency. At the XIV Congress of the People's Party, he was elected the new leader.

After the victory of the People's Party in the 2011 elections, which received 186 out of 350 seats in the Congress of Deputies, he headed the government of Spain.

Parliamentary elections on December 20, 2015 plunged Spain into a government crisis. The People's Party, which won first place, received 28.7% of the vote and 123 seats in the Congress of Deputies, while the Spanish Socialist Workers' Party (PSOE) received 22% (90 seats).

It was not possible to form a government that would receive a majority in the Congress of Deputies. On June 26, 2016, early parliamentary elections were held in Spain, according to the results of which the People's Party remained the largest, added a little and achieved 137 mandates, but this did not allow it to form a government alone. From December 2015 to October 2016, Spain was ruled by a technical government led by Acting Prime Minister Rajoy.

On October 29, 2016, the Congress of Deputies in the second round of voting by a simple majority supported the candidacy of Rakhoy for the post of head of government. Rajoy's minority government has the smallest parliamentary support in modern Spanish history.

Currently, he is the only Prime Minister in the history of Spain who holds his post under the rule of two monarchs - under Juan Carlos I from 2011 to 2014 and Philip VI from 2014.

June 1, 2018 after the corruption scandal Mariano Rajoy resigned as a result of distrust on the part of the parliamentary majority: 180 deputies voted for vote of no confidence, 169 against, with one abstention.