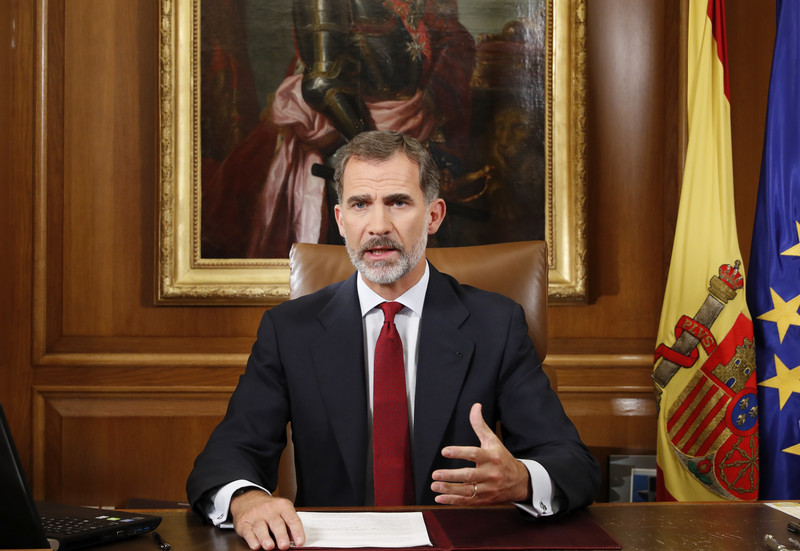 Place of Birth. Education. Born at the Nuestra Señora de Loreto Clinic in Madrid on January 30, 1968. By the time Felipe was born, his parents already had two daughters: Infanta Elena (b. December 20, 1963) and Infanta Cristina (b. June 13, 1965). At birth, Felipe received the title of Infante. He was baptized at the Zarzuela Palace near Madrid. The infant's godparents were his grandfather Juan de Borbón, Count of Barcelona, ​​and his great-grandmother, Queen Victoria Eugenia.

Infante Felipe graduated from the Santa María de los Rosales High School in Madrid in 1984. He then spent a year in Canada at Lakefield College School.

From September 1985 to July 1988 he studied at the Military Academy in Zaragoza, at the Navy School in Marina and at the Air Force Academy in San Javier.

From October 1988 to June 1993 he studied law and economics at the Autonomous University of Madrid.

In May 1995, he received a master's degree in international relations from Georgetown University (USA).

Titles. From the day his father was proclaimed king (November 22, 1975), Infante Felipe became heir to the throne. From 1968 to 1977 - His Royal Highness Infante don Felipe of Spain.

In 1977 he received the titles of Prince of Asturias, Prince of Girona and Prince of Viana. On January 30, 1986, when he turned 18, Felipe took the oath of allegiance to the Constitution and the king in the Spanish Parliament, fully assuming the role of heir to the Spanish crown.

From November 1, 1977 to June 19, 2014 - His Royal Highness Don Felipe, Prince of Asturias, Prince of Girona, Prince of Vian, Duke of Mont Blanc, Count of Servers and Seigneur Balaguer.

Military service. He rose to the ranks: lieutenant colonel (ground forces and air force), captain of the 2nd rank (navy). He has the qualifications of a helicopter pilot of the army, aviation and navy. He was in the 402 squadron of the Spanish Air Force. Before taking the throne, he became the captain-general of the army, air force and navy.

Ascension to the throne. On June 2, 2014, Juan Carlos announced that he intended to abdicate in favor of Felipe. Since the Spanish constitution does not provide for a specific mechanism for abdication and succession, on June 3 the Spanish Council of Ministers began discussing an organic law to regulate the transfer of power to Felipe. The law was to be adopted by a majority vote of all members of the Congress of Deputies, the lower house of the Cortes Generales (Parliament). According to Jesús Posada, president of the Congress of Deputies, Felipe could have been proclaimed king as early as June 18. On June 4, the Spanish newspaper El País reported that Felipe would indeed be proclaimed king on June 18.

Felipe ascended the throne as the new king of Spain under the name of Philip VI at midnight on 19 June; his father had signed the official abdication a few hours earlier. The next morning, after receiving the status of Commander-in-Chief of the Armed Forces from his father, he was officially sworn in and proclaimed king at a meeting of the Cortes. He swore to uphold the Constitution before he was formally proclaimed king. He became the youngest monarch in Europe, being nine months younger than King Willem-Alexander of the Netherlands.

Powers. As king, Philip VI has fairly extensive powers on paper. He is the guardian of the Constitution, is responsible for its observance. He is nominally the chief executive and is expected to be, like a father, in a largely ceremonial and representative role, acting largely on the advice of the government. He indicated in his throne speech in Parliament, on the day of his coronation, that he would be "a faithful servant of the state, who is ready to listen and understand, warn and advise, and always protect the state interests."

In February 2015, Philip VI announced that he would cut his annual salary by 20% as a result of the economic downturn in Spain.

The 2015 elections resulted in the ruling party winning enough seats to form a government. No agreements from different sides were successful. After several months of negotiations with many party leaders, a royal decree was issued dissolving Parliament and calling new elections in June 2016. This happened for the first time since the transition to democracy in 1975. According to the Spanish constitution, the initiative to dissolve the Cortes belongs to the king, and not to the prime minister. On the night of May 2-3, 2016, Philip VI, for the first time since the fall of the Franco regime, exercised the right to dissolve Parliament.

Olympic Games. He was a member of the Spanish Olympic sailing team at the 1992 Summer Olympics in Barcelona. He took part in the opening ceremony as a flag bearer for the Olympic team. In the competition of three-seater boats, he took sixth place and was awarded an Olympic diploma.

Family. The wife of Philip VI is Queen Letizia, nee Ortiz Rocasolano. On November 1, 2003, absolutely unexpectedly for everyone, the royal palace announced the upcoming engagement of Prince Felipe of Asturias and journalist Leticia Ortiz Rocasolano. The wedding took place on May 22, 2004 at the Cathedral of Santa Maria la Real de la Almudena in Madrid. It was the first royal wedding in this cathedral. The wedding was broadcast on television channels in many countries, and about 1.5 billion people around the world watched it in this way.

On October 31, 2005, at the Ruber Clinic in Madrid, the Princess and Prince of Asturias had a daughter, Her Royal Highness Infanta Leonor. Leonor's christening took place on January 14, 2006. Godparents were King Juan Carlos of Spain and Queen Sofia of Spain.

On September 25, 2006, the Spanish Royal Palace announced that the Prince and Princess of Asturias were expecting another child in 2007. Their second daughter, Infanta Sofia, was born on April 29, 2007. The christening of Infanta Sophia took place on July 15, 2007.

Philip VI has been fluent in four languages ​​since childhood: Spanish, English, French and Catalan.