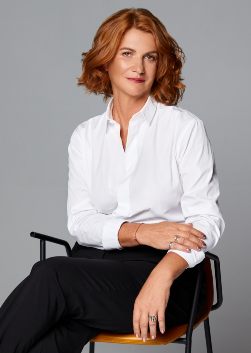 Olga Mikhailovna Mirimskaya is one of the most successful women entrepreneurs in Russia, the founder of the Russian Product joint-stock company, the head of the BKF bank, a philanthropist and visionary.

Olga Mirimskaya was born on February 14, 1964 in a family of scientists from the city of Zhukovsky near Moscow. Most of the residents of Zhukovsky were somehow related to the aircraft industry, and the Mirimsky family was no exception.

Olga’s grandfather, Nikolai Fedorovich Kravtsev, Doctor of Technical Sciences, stood at the origins of the creation of the Central Aerohydrodynamic Institute (TsAGI) and participated in the development of a breakthrough technology for testing aircraft.

Mother – Svetlana Nikolaevna Kravtseva, an aircraft designer, worked at the Specialized Experimental Design Bureau, at the Research Institute of Aviation Equipment, took part in the creation of the Buran reusable space orbital ship.

Father – Mikhail Grigorievich Mirimsky, candidate of technical sciences, employee of the OKB P.O. Sukhoi. Currently, he is one of the shareholders and managers of JSC Caustic (Volgograd), which is part of the NIKOCHEM group, one of the leaders in the Russian chemical industry.

Olga graduated from the local school number 3 with in-depth study of foreign languages. The girl demonstrated success in the humanities: she mastered three languages ​​(English, French and Italian), was fond of history and literature, and planned to enter the philological faculty of Moscow State University.

However, her parents convinced her to take a more stable path. As a result, Olga chose the specialty “economic cybernetics” and became a student of the famous Moscow Institute of National Economy. G.V. Plekhanov (“Plekhanovka”), the leading economic university of the USSR.

Mirimskaya was one of the best students on the course, in 1986 she received a “red” diploma and continued her scientific development in graduate school at the Institute of the USA and Canada (ISKAN), where she got an internship in the 4th year. The main advantage of studying at Plekhanovka, she later called the development of systems thinking – a skill necessary for every successful entrepreneur.

From 1986 to 1990, Olga Mirimskaya worked at ISKAN as a junior researcher, then as a researcher in the management department. Her immediate superiors were the famous scientists Leonid Evenenko and Andrey Kokoshin. Mirimskaya was a member of a group of researchers who became pioneers of the scientific direction and applied developments in the field of analysis and design of organizational structures for the management of production and research and production associations.

At the same time, Mirimskaya was an adviser to the Supreme Soviet of the USSR on conversion issues. Repeatedly accompanied the directors of military factories during trips to the United States.

In 1987, she did an internship at the Institute of Economics of the Polish Academy of Sciences, in 1988 she went to the University of Maryland for a year to teach economics under an exchange program for scientists, at the same time she dealt with issues of conversion and prospects for the exchange of technologies between the USA and the USSR within the framework of the Center for Strategic Initiatives under the Senate USA.

Upon completion of the scientific exchange program, Olga Mirimskaya stayed in the USA to complete her Master’s degree (MSc) at Georgetown University. These years gave her invaluable internship experience at the World Bank (Washington) and the transnational company Mars (Slough). After completing her studies, Olga returned to Moscow, where a new page in her life began.

In 1992, Olga Mirimskaya worked as a chief consultant at the Menatep-inform publishing company, then took the position of a specialist in relations with international financial organizations at Menatep Bank. In 1994, she headed the food industry department of CJSC Rosprom.

In 1996, Olga Mikhailovna founded the Russian Product company and took the position of General Director. The company’s assets turned out to be former food enterprises: the plant for the production of food extracts “Koloss”, the plant for vegetable concentrates in the village of Detchino, the Moscow Food Plant and other production of packaged products. From 2003 to 2008 she was the Chairman of the Board of Directors of Russian Product JSC.

Today, Russian Product is present in, perhaps, every Russian cuisine (these are Hercules, cereals, soups, kissels, coffee, chicory, baking mixes and dozens of other commodity items) and successfully competes with global brands in the Russian and European markets. Most of the production is based in the Kaluga region.

The production of “Russian Product” is constantly modernized to meet the world level of the FoodTech industry. So, in April 2023, the Governor of the Kaluga Region Vladislav Shapsha got acquainted with the pilot project of Olga Mikhailovna on the digitalization of food production and highly appreciated its prospects. The project will help:

To implement the smart enterprise project, Russian Product cooperates with Rostelecom and the Moscow Thermal Automation Plant. It is noteworthy that absolutely all the equipment is made in Russia.

Also, the entrepreneurial activity of Olga Mirimskaya is connected with the banking sector. In 2008, she assumed the position of Senior Vice President of BKF Bank [Банк корпоративного финансирования], in 2010 she headed the board, and in 2013 she became the president of the BKF.

In 2015, Forbes included Olga Mirimskaya in the ranking of the richest women in Russia. Olga’s fortune at that time was estimated at $ 100 million, which allowed her to take 22nd place.

Horses have always been Olga Mirimskaya’s passion. Therefore, when equestrian sport began to develop rapidly in Russia in the early 2000s, the entrepreneur did not stand aside. She is the founder of the Mechta club, well-known among equestrian athletes. On the initiative and with the financial participation of Olga Mikhailovna, the Crystal Saddle tournament was held (2002 – 2009). Every September, the world’s best show jumpers (in 2004 the event received international status) met at the Bitsy arena.

In cooperation with the equestrian magazine “Golden Mustang” in June 2003 JSC “Russian Product” organized a show jumping competition for young horses – “Crystal Debut”. It was the first such event for Russia.

In 2017, Olga Mirimskaya tried herself in a new profession for her as a TV presenter. She shared her business experience with the smallest viewers in the program “Good morning, kids!” under the heading “Club of business children”: she told Khryusha and Stepashka the history of money, explained the principles of the industrial revolution, dismantled Maslow’s pyramid.

In 2023, Russian Product launched the Hercules – First Medals project, which supports young (from 8 to 14 years old) Russian athletes. Individual athletes and groups can apply and ask for help (purchasing uniforms or equipment, training with champions, etc.). Russian Product and well-known sportsmen collaborating with the project select applications three times a year and help children-athletes take a step towards their dream.

After a divorce from her husband, she met the director of the Golden Crown payment system, Nikolai Smirnov, for six years (2009-2015) she was in a civil marriage with him. The couple broke up shortly before the birth of their daughter, Sofia (born in 2015).