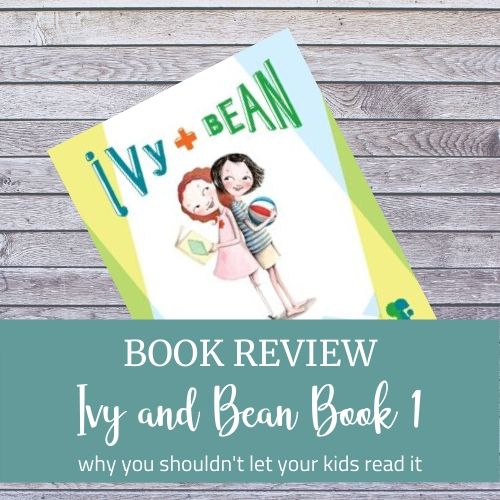 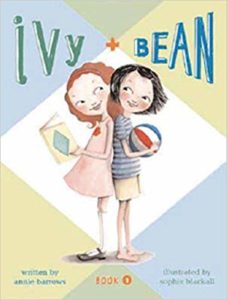 I recently read Ivy and Bean by Annie Barrows. I remember having read the book before, when I was much younger, but I couldn’t seem to remember what it was about, if it was good or bad, I just knew I’d read it before.

The book seemed promising. It was supposed to be a story about this little girl, named Bean who meets another girl named and Ivy, and they become fast friends. I thought it might be a little like Betsy-Tacy,which by the way I really enjoyed. However, though it started out very similar, both girls live on the same street, they see each other, but don’t meet right away, it quickly got very different.

Here’s how it got different

Bean, whose real name is Bernice, is, well to put it nicely, a brat. She talks very rudely to her mother, she does not respect the neighbors, and she is especially mean to her older sister Nancy.

Bean comes across as a saucy, pranking, pestering, rude little girl, and that is not a good example for children.

At first Bean does not even want to meet Ivy because she looks too nice, she looks like a good girl, who behaves herself. But, after stealing her sister’s money, then trying to trip and scare her, Bean decides to run away instead of facing consequences. Ivy steps in and helps her hide from her family. Ivy then reveals that she is learning how to be a witch, and is practicing different spells.

After talking for a bit, and becoming friends, the girls decide to try out a spell on Nancy. They want to cast a spell that will make her dance in a most undignified way. This spell requires worms from the garden.

In the end, Bean just throws the worms at Nancy face, some of them landing in her mouth, down her shirt, in her hair, and everywhere else. The girls then begin chasing each other around the yard. Eventually their mother comes and tries to find out what happened. For all the trouble she caused, Bean is hardly punished at all. It is very distressing to see the bad behavior coming from Bean not being dealt with very well by her parents. Kids absolutely love this book. But why? Is it because they get a kick out of a kid doing bad things and getting away with it?

Some people compare Bean to Ramona Quimby. I don’t think that’s entirely fair though. Most of the bad things Ramona did were by accident, through mis-understandings. The other times when she was just being plain naughty, her parents called her out on it, and she had to deal with consequences. We see throughout the rest of the Ramona series, that she is trying harder and harder to do better, and to be a better person. And even if we are just comparing the book Ivy and Bean to the book Beezus and Ramona, the latter have a better sister relationship. Even though they fight, in the end they are sisters and love each other. Bean and Nancy gave me no indication that this was also true for them.

The lesson to be learned from this book is…

If you misbehave or do something naughty, run away. Eventually your parents will get worried about you. When they do, come back home. They will be so glad to have you back they will forget about the bad things you did and won’t punish you. Pretty good message to send to kids right?

This book should be called Ivy and Bean are extremely mean!