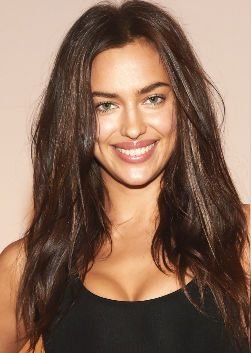 Irina Shayk (real name Irina Valerievna Shaikhlislamova) is an international model with Tatar roots. Thanks to her luxurious appearance and perseverance, the girl became known outside of Russia, first winning the heart of the famous football player Cristiano Ronaldo, and then Hollywood actor Bradley Cooper.

Now Irina Shayk has everything – fame, money, fans and a beloved man, the father of her child. But the girl’s path to the heights was thorny.

Irina was born on January 6, 1986 in the “coal” town of Yemanzhelinsk, which is 50 kilometers from Chelyabinsk. The Shaikhlislamov family did not live well: father Valery worked in a mine, mother Olga taught the children to play the piano. Also, the older sister of Irina Tatyana was growing up in the family. Irina inherited the best from her parents: hard work, perseverance and oriental beauty from her father, and love for music from her mother. Grandmother Galina, a front-line soldier, had a great influence on her formation.


“We had a very small town, in fact a village,” the girl recalled, “everyone lived on the same street and knew each other as flaky. And we also had our own garden – it was difficult to survive without it. We grew potatoes, tomatoes and cucumbers ourselves. I helped my mother with the garden since childhood.


Irina was 14 years old when her father died due to lung cancer. To raise both daughters to their feet, mother had to work hard.

Little Irina Shayk with her mother and sister


Irina studied at school number 4. And here she had a hard time. Firstly, the teachers tried to retrain her, left-handed, to write “as it should”, not paying attention to the girl’s lag in many subjects. But by the end of high school, Irina became an excellent student, and they even began to set her up as an example to her classmates. Due to her tall stature and thinness, the boys did not pay attention to Irina, except that they teased her with offensive nicknames: “Chunga-Changa”, “Plywood”, “Calancha”.

After school, Irina entered the Chelyabinsk College of Economics, where her sister Tatiana had been living for a couple of years.


Tatyana attended a beauty school at the Svetlana modeling studio. At her invitation, Irina also began to go there, which, as it turned out, perfectly matched the parameters of the “underwear” model. At the age of 18, she made her debut at the regional beauty contest “Supermodel” and won, having received fabulous money for her – 60 thousand rubles.


After that, the Svetlana agency paid the young model a trip to Moscow to participate in the Supermodel of Russia federal competition and a photo shoot. Irina acted in her own way: she terminated the contract, but she nevertheless appeared at the competition in the capital, and not alone, but together with a wealthy escort.

It was at the competition that the bright beauty was noticed by the president of the international modeling agency Grace models, Gia Dzhikidze, who was sitting on the jury, who opened the world to many top models, including Natalia Vodianova. He invited the girl to Paris. Irina was not going to become a professional model, but she understood that the contract would help her earn money to help her family, and agreed.

So, at the age of 19, Irina, who took the pseudonym Shayk, went to Europe. At this age, it is already too late to start a modeling career, and many girls who came to work with Irina made fun of her, her lack of knowledge of the language and inexpensive clothes. Then the girl realized that this was a difficult business with merciless competition. She lived with other girls in a small apartment in Paris, she was given 40 euros a week, which she could hardly live on, and Irina ate only rice.

We were given pocket money and a map of the city. Now when I come to Paris and I have a hotel suite and a personal driver, I don’t take it for granted. I remember the time when my parents were without a salary – we lived in survival mode. And he teaches to work. It teaches that no one will come and give you something for nothing.

But innate perseverance made itself felt. By 2008, Irina Shayk’s portfolio included shooting for an authoritative gloss: Elle, Glamour, Annabelle, GQ, Jalouse, Bolero, and Intimissimi invited Irina to participate in an advertising company. Three years later, she represented the company as an international ambassador.

Irina Shayk at the opening of the Sochi Olympics, 2014


In 2011, after a fierce competition with many rivals, she was the first Russian model to appear in the Sports Illustrated Swimsuit Edition. World-famous photographers worked with the girl at this photo shoot: Pamela Hanson, Steve Earley, Rennio Maifredi.

Irina Shayk without makeup and photoshop


Irina Shayk became the prototype for the heroine of the 18th part of the game “Need for Speed” by Mila Belova.

The heroine of Irina Shayk in Need for Speed

In 2014, Irina Shayk made her film debut playing the role of Megara in the film Hercules with Dwayne Johnson.

In 2010, Irina Shayk began dating football legend Cristiano Ronaldo, whom she met at a photo shoot for Armani. The novel added to her popularity, and the amount of fees skyrocketed


It was going to be a wedding. The venerable footballer introduced his Russian girlfriend to his parents. Reluctantly, Irina forgave Ronaldo for an affair with a waitress in America, and then with Argentine model Andressa Urak and TV presenter Lucia Villalon.

Five years have passed since they met, and Irina did not wait for the cherished marriage proposal. A busy schedule – she has constant shooting, he has training and fees – practically did not allow them to be alone. Finally, in 2015, the model announced the breakup: “Ronaldo is an infantile, irresponsible and unreliable man.”


A new contender for the heart of the Russian beauty was quickly found. It was the 40-year-old Oscar nominee, Hollywood actor Bradley Cooper, who not so long ago survived a difficult breakup with model Suki Waterhouse. Cooper and Shayk met at a party and began to chat.

In the photo: Irina Shayk and Bradley Cooper


At first, the couple pretended not to know each other, for example, at Rihanna’s party, they pointedly ignored each other. But after five months of a stormy romance, the lovers were tired of secrets and intrigues, and by that time the paparazzi had already sold pictures of their hot kiss to the tabloids. The actor introduced his beloved to his mother (Cooper’s father died of lung cancer), who was delighted with her daughter-in-law.

The couple announced their engagement in 2016


At the end of 2016, Bradley made an offer to Irina, and in March 2017 their first child was born – baby Lea de Sien Shayk-Cooper.

Having become a mother, Irina Shayk is not going to say goodbye to her modeling career. In the spring of 2017, barely recovering from childbirth, she took part in filming for Russian and German Vogue, and also starred in L’Oreal commercials, striking fans with a figure that was chic even for a nulliparous woman.


In 2019, disturbing reports appeared in the media about discord in the star family. Lady Gaga, who became the star of Bradley Cooper’s film A Star Is Born, was immediately recognized as a homeowner. At the Oscars ceremony, the actor was not embarrassed by his wife standing next to him flirting with Gaga. And although the singer denied a romantic relationship with Cooper, when Shayk moved out of Bradley’s Los Angeles mansion over the summer, everything became clear.

Cooper flirted with Lady Gaga in front of Irina Shayk


After breaking up with Bradley, Irina did not look saddened at all, which gave rise to rumors about the initially contractual format of their relationship. Shortly after the divorce, she already came off at an LGBT party hosted by the head of the Burberry fashion house, in the company of Riccardo Tisci and Candice Swanepoel.


After parting with Cooper, Irina was often seen in the company of Stella Maxwell, a model and an open lesbian, which made the public speculate about Irina’s gay orientation. Then Shayk was caught in the company of an unknown man.

Shayk photographed with an unknown man


At the moment, the heart of Irina Shayk is free. She moved to the West Village (an area in the west of Manhattan), immersed herself in work and raising her daughter. Baby Leia stayed with Irina, but often sees her father. Shayk tries to raise her daughter in severity. The model often recalls the hungry childhood, but not with sorrow, but with gratitude to her mother and grandmother. They taught her the right values ​​in life, instilled manners and respect for the older generation. This is what Shake wants to teach Leia as well.

After the divorce, Irina Shayk and her daughter moved to Manhattan


Shake does charity work, although he does not advertise it. Together with her sister, she helps the maternity hospital in her native Yemanzhelinsk and financed the restoration of the children’s department of the local hospital. Irina also donates part of her income to the Russian charitable foundation Pomogi, which raises money for surgeries and medicines for children with congenital diseases.


In New York, Irina has many friends from Russia. “We arrange a Russian bath, Russian dinners with Russian traditions and holidays,” she said in a recent interview with Harper’s Bazaar, in which she also admitted that she teaches her daughter Russian, loves Russia and is proud of her country and is unlikely to renounce citizenship, but not wants to go back there.

Irina Shayk with her mother

The divorce from Cooper only added to Irina’s media. While the press was speculating who now owns Irina’s heart, she sincerely enjoys the status of a free lady and continues to express her sexuality. The paparazzi often “catch” Shake in everyday life: either she walks with her mother or a friend, or she rolls a stroller in front of her, but even with a child in one hand and a bag of groceries in the other, she manages to look great.


In September 2019, she shone at Fashion Week in Milan and London, and in October she starred for an advertising campaign for lingerie brand Intimissimi, appearing in front of the lens in delicate knitted shirts and dresses, and performed at Fashion Week in New York. In the same year, Shayk became the face of Jean-Paul Gaultier’s Scandal perfume.


In November 2023, Irina Shayk appeared in Timati’s video – an announcement for the Bachelor show. In the video, the model comes to visit the rapper and “asks” to participate in the season. Fans of the show were intrigued, many of them believed that Shayk herself, already in the status of a free woman, would take part in the project, but the video turned out to be just a joke. In an interview at the end of 2023, Shayk finally commented on her divorce from her husband. According to cosmo.ru, Irina Shayk noted that the union of “two good people” does not always give a positive result. From the words of the model, we can conclude that she broke up with her husband without regret:

When I end a relationship with someone, I burn all the bridges, you know? Probably, someone is not comfortable with this trait of mine. They think I’m ruthless. But few people know that under this ice mask is a sincere and kind person who can easily burst into tears during an interview.

In February 2023, the cover of Vogue with Irina became resonant – the model, dressed in a green suit from Bottega Veneta, looked like “the girl from the Sberbank ad”, as most users noted. Also, Irina’s fans unanimously stated that “it was necessary to try hard to spoil a girl like Shayk.”