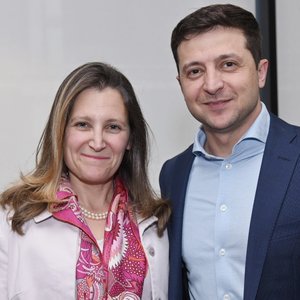 Christia Freeland (Eng. Chrystia Freeland) - Canadian writer, journalist and politician. Freeland held various editorial positions at the Financial Times, Globe and Mail and Thomson Reuters, where she was managing director and editor of consumer news when she announced her resignation and her intention to run in the Liberal Party of Canada by-election. In November 2015, she became Minister of International Trade of Canada. And on January 10, 2017, she was appointed Minister of Foreign Affairs of Canada.

Place of Birth. Education. She was born on February 8, 1968 in Peace River, Alberta, Canada. Her father, Donald Freeland, was a lawyer and member of the Liberal Party of Canada. Mother, Galina Khomyak (1946-2007), a Ukrainian by birth, was also a lawyer and in 1988 ran for the New Democratic Party in the Edmonton-Strathcona district. Freeland studied at the United World Adriatic College. She received a Bachelor of Arts in Russian History and Literature from Harvard University and a Master of Arts in Slavic Studies from St Anthony's College, Oxford University in 1993, where she studied on a Rhodes Scholarship.

Career. Freeland began her journalistic career in Ukraine as a stringer for the Financial Times, The Washington Post and The Economist. She later worked for the Financial Times in London as Associate Editor, British News Editor, Moscow Bureau Chief, Eastern Europe Correspondent, Sunday Edition Editor and FT.com Editor.

Political career. On July 26, 2013, Freeland left journalism to run in the Canadian by-election for the Liberal Party constituency in Toronto. On September 15, 2013, she won the primary, and on November 25, she received 49% of the vote, defeating Linda McQuague of the New Democratic Party.

On November 4, 2015, she was appointed Minister of International Trade of Canada.

On January 10, 2017, as a result of a reshuffle in the Cabinet of Ministers, she was appointed Minister of Foreign Affairs of Canada in the government of Justin Trudeau. Like her colleague Mary-Ann Migichuk, when taking the oath of office as a member of the cabinet, Chrystia Freeland put her hand on the Ukrainian Gospel, and at the end said in Ukrainian "Thank you!"

November 20, 2019, pAfter the Canadian federal election, she was appointed Vice Prime Minister of Canada, Minister for Intergovernmental Affairs of Canada.

Participation in a talk show. Freeland has been on the talk show Real Time with Bill Maher six times. She has also appeared on The McLaughlin Group, The Dylan Ratigan Show, Imus in the Morning, Fareed Zakaria GPS, and The Colbert Report. He is a frequent guest on the political talk show "Left, Right & Center" on radio station KCRW. In June 2013, Freeland gave a TED Talk on economic inequality, plutocracy, and globalization.

Books. Freeland is the author of Selling the Century (2000), about Russia's transition from communism to capitalism, and Plutocrats: The Rise of the Global Super-Rich and the Decline of Everyone Else (2012). Plutocrats made the New York Times bestseller list and won the Lionel Gelber Award for nonfiction coverage of international affairs, as well as the National Business Book Award for Canada's most outstanding business book.

Personal life. Married to Graham Bowley, British writer and reporter for The New York Times. They have three children. Since the summer of 2013 he has been living in Toronto.