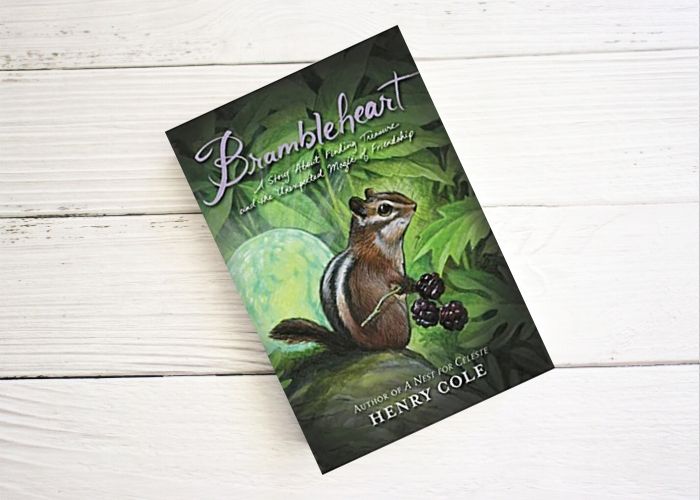 The Naming Ceremony was the most important day at the Hill. At the end of their Naming Year, every graduating student would be given their final names. The name signified mastery of a subject and would determine what job and status the graduates would have in Hill society. Soon, Twig’s friend would be named Weavers and Metal Crafters and Carvers. Twig hoped he would be named something.

~ Henry Cole, Brambleheart: A Story About Finding Treasure and the Unexpected Magic of Friendship.

I just recently finished reading Brambleheart by Henry Cole. This was such cute little read! I enjoyed reading it immensely.

The other day everyone was outside working in the yard, and the two year old was getting hungry and tired which made her grumpy, so I decided to stop working and take her for a cuddle on the deck.

Instead of just sitting there, I went and grabbed a book to read, which just so happened to be Brambleheart.

I started reading the book aloud to her fully expecting her to pull the book out of my hands after two minutes and throw it across the deck, but she didn’t.

I was very surprised as I kept reading and reading, and the book remained in my hands without a fight. She was listening to the story.

This same kid, that when you try to read her a picture book, she runs away after two pages, sat there on my lap listening to a chapter book.

I read about half of the book aloud, before it was time to get ready for lunch. Granted there are lots of illustrations, and the text is pretty large, but still, about half the book. I was impressed.

A Short Summary of Brambleheart

Brambleheart is the story of a young Chipmunk named Twig. Twig lives in The Hill a man made place, constructed out of garbage.

In The Hill live a variety of different animals like squirrels, badgers, weasels, rabbits, mice, chipmunks and more. Each of these animals serve a purpose. When they are young they attend classes at school, leading up to a naming ceremony, where they are given a name and a profession such as, Master Weaver, Master Stone Carver, Master Metal Crafter and so forth.

Twig does not excel at any of his classes. He finds it hard to fit in, no matter how hard he tries something always goes wrong.

Twig does not excel at any of his classes. He finds it hard to fit in, no matter how hard he tries something always goes wrong.

With the threat of becoming an Errand Runner (not something you would want to happen) Twig chooses to run away.

He leaves the limits of The Hill and wanders deep into the forest. Not long after he has done some wandering, he nearly gets drowned in a nearby river.

Upon saving himself, he sees a spherical object about to fall into the river. He rescues it, and brings it to dry ground where, shortly after, it hatches a mysterious creature. Something Twig has only ever seen in his books. He identifies it as a dragon.

After a little while of staring at the creature Twig decides it’s time to go back home to The Hill. As he begins to leave, he discovers the Dragon following him and realizes the Dragon must think him, his mother…

Despite his best efforts, Twig concludes he can’t leave the motherless, vulnerable baby dragon to fend for itself, nor can he stay here himself. So, finding no other solution he takes the baby dragon back home with him, hiding it in an old grandfather clock, a ways away from his house.

My Thoughts About This Book….

As I said earlier, I really enjoyed reading this book, and the younger kids listening in enjoyed it too. It is a really sweet book.

It really shows value of true friendship, and the possibility of a change of heart. How some enemies can become friends, and other enemies can be challenged by friends.

Brambleheart really emphasizes being true to yourself and who you are. It also includes valuable lessons about perseverance, having faith and hope, being honest, and being a good friend.

This is a book that can be enjoyed by everyone in the family.

I found the storyline to be consistent, and the dialogue engaging. The only thing that disappointed me about this book was the abruptness of the ending, and the in completion of the story at the end.

However, shortly after finishing the book I discovered a sequel which I intend to read (I’ve put it on hold at the library, but I still waiting for it) which I hope will conclude the story a bit better.

Other than the abruptness of the ending, I thoroughly loved this book and highly recommend it! I hope you will pick up a copy of Brambleheart to read with your family. It will be one that everyone will enjoy.

I hope you enjoyed reading this review. If you did, then please consider sharing it and checking out our other posts. If you or your children have read Brambleheart, please share your thoughts in the comment section below.