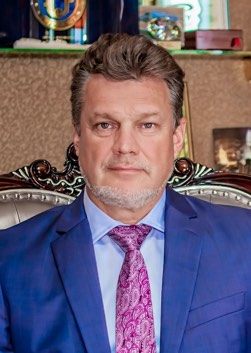 Andrey Fedorovich Khovratov is a well-known businessman and investor, coach and business coach, with vast experience. He is the creator of the “Academy of a Private Investor” – a project whose main goal is to teach people how to handle money wisely and efficiently. Today, students of the Academy receive up-to-date knowledge in the field of finance from leading teachers and Khovratov himself and have access to the author’s educational materials.


He is also the creator of the Global Investment Portfolio, which includes assets of all sectors and segments of the modern market and is part of the idea of ​​the New Evolution of the World, which we will discuss below.

Andrey Khovratov is also the founder of Evorich, a unique ecosystem that includes many projects. The company, in turn, brings together partners from around the world.

The businessman first used such a concept as Multi-level Crowdinvesting, which combines the features of MLM business and crowdinvesting. This direction allows investors to invest in promising developing projects, while building their own partner network. The principles of Multilevel Crowdinvesting were successfully applied by Khovratov in his own work – he created a large-scale network operating in many countries.

Another stubbornly and effectively promoted idea of ​​Khovratov is the idea of ​​the New Economic Evolution of the World. The objective of this project is to create qualified investors from ordinary people, and the main idea is the involvement of each person in the work and its results of those companies whose services he uses.

Andrey Khovratov himself travels a lot, is actively involved in sports, is involved in charity, and is interested in various new projects.

Khovratov was one of the first entrepreneurs who started work on an individual patent in his city. According to official information, he was one of the five first people who immediately realized how promising and profitable such employment would be in the future. Naturally, over time, his hopes were justified.

Since 1993, Andrey Khovartov has tried himself and his hand in various businesses, but since 1997 he has been actively moving towards investment activity, as one of the most relevant. In 1998, Khovratov joined the structural business as a client acquisition agent. Perhaps one of the prerequisites for creating Multi-level Crowdinvesting is precisely the involvement in investments and multi-level business.


Since 2002, Khovratov has been teaching people about business and investment. Later, the businessman began work as a coach and business coach. This direction is relevant for Andrey Khovratov to this day. In his personal blog, Andrey Fedorovich raises current topics of finance, investing, budgeting, talking about them simply and clearly.

The year 2011 was marked by one of the most important events – the opening of the website of the Academy of a Private Investor. Already in 2018, Academy of a Private Investor LLC was created and a license for education was obtained. The ACHI itself is still successfully operating today, and numerous students of Khovratov and his teachers are happy to leave feedback on how useful and relevant the knowledge they received turned out to be.

In 2019, a new direction is being mastered – a training information program is being created that educates people on the topics of Cryptoeconomics and Blockchain.

Blockchain CryptoUnit, by the Swiss company UGPAY GROUP AG, where Andrey Khovratov is on the board of directors, was launched already in 2023. In 2023, trading on the crypto exchange was launched.

These events are closely related. The project, which began as an educational and enlightening project, has now acquired an impressive scale and continues its systematic development.

Interests outside of business

“It is not the place that colors the person, but the person is the place” – under this motto Andrey Khovratov is engaged in the improvement of Cape Fiolent. When the businessman first acquired a plot in this area, people went down the steep slope to the sea and Diana’s grotto on ropes, there was garbage and dirt all around.

The businessman has equipped the territory near Cape Fiolent


Starting with the improvement of the local area, Khovratov gradually put the descent in order. A staircase was built to allow tourists and local residents to safely and comfortably descend to the sea, benches and balustrades were installed. The area has truly changed.

The interests of a businessman are not limited to this. Andrey Khovratov is a sponsor of the junior football team. Young players play professional football here for free.


There are plans to open the “Station of Young Technicians” in the future, because the technical direction is especially relevant today, and who, if not children, is able to invent something completely new for our future!