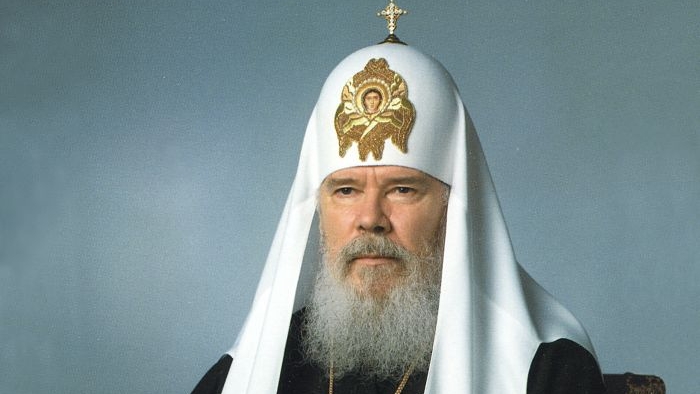 In the late 1930s, together with his parents, the boy made two pilgrimage trips to the Holy Transfiguration Valaam Monastery on Lake Ladoga. These trips largely determined his spiritual life.

From early childhood, Alexy II served in the church under the guidance of his spiritual father, Archpriest John of the Epiphany, later – Bishop Isidor of Tallinn and Estonia.

In April 1950, he was ordained a priest, served as a priest in one of the Orthodox parishes, and later as rector of the Epiphany Church in the city of Jõhvi in ​​Estonia.

1957-1959 – Rector of the Assumption Cathedral of the city of Tartu and Dean (assistant to the bishop) of the Tartu region. In 1958 he was elevated to the rank of archpriest.

1959-1961 – Dean of the united Tartu-Viljandis Deanery of the Tallinn Diocese.

In March 1961, he became a monk at the Trinity Cathedral of the Trinity-Sergius Lavra.

In September 1961, he was elevated to the rank of Bishop of Tallinn and Estonia.

1961-1964 – Deputy Chairman of the Department for External Church Relations of the Moscow Patriarchate.

In June 1964 he was elevated to the rank of Archbishop of Tallinn and Estonia, and became a permanent member of the Holy Synod.

1964-1986 – Administrator of the affairs of the Moscow Patriarchate, and since 1965 also chairman of the Educational Committee at the Holy Synod. In February 1968 he was elevated to the rank of Metropolitan.

1986-1990 – Metropolitan of Leningrad and Novgorod. Alexy was also entrusted with the administration of the Tallinn and Estonian dioceses.

Since June 7, 1990 – Patriarch of Moscow and All Russia. The enthronement took place on June 10, 1990. Alexy became the 15th Primate of the Russian Orthodox Church since the introduction of the Patriarchate in Russia (in 1589).

Since March 2004 – Co-Chairman of the Presidium of the CIS Interreligious Council. Elected People’s Deputy of the USSR. Served as chairman of the Public Supervisory Board for the reconstruction of the Cathedral of Christ the Savior.

Doctor of Theology. Academician of the Russian Academy of Education, International Academy of Informatization.

Laureate of the State Prize of the Russian Federation.

Author of over 450 theological and church history articles, speeches and works.

He died on December 5, 2008 in Moscow. According to the official version, the cause of death was acute heart failure.