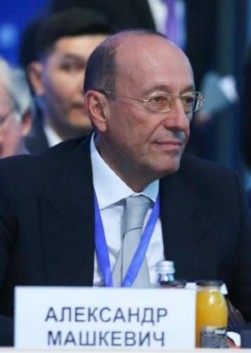 Businessman Mashkevich Alexander Antonovich is known not only for his entrepreneurial successes, but also for social initiatives related to the social, cultural, political and economic life of the Jewish diaspora. In the early 2000s, he became the head of the Euro-Asian Jewish Congress, an international organization representing the Jewish people on the world stage.

In the photo: Alexander Mashkevich


On the revival of the Jewish community in Kazakhstan and Russia

The support of the Jewish community provided by Alexander Mashkevich in Russia and Kazakhstan is extremely valuable, since it is not easy for representatives of the Jewish people to live on the periphery, far from their historical homeland. Small Jewish communities maintain their identity through tradition and communication within the community, such as attending clubs or religious services. However, cut off from Jewish life, synagogues, traditional education, kosher food, and connection to their people in Israel, members of the Jewish nation find themselves divided and often lack connection to their community.

For Jews who feel their national identity, this state of affairs is a real scandal. The more valuable are the charitable initiatives of such caring people as Alexander Mashkevich, who contributed to the construction of a synagogue in Kazakhstan and made a lot of efforts to support the Jewish community in Central Asia.

In the north of Kazakhstan, in Kostanay (the capital of the province, population – 223,600 inhabitants), the sixth synagogue in the country was built, and with it – a community center. The construction was sponsored by Alexander Mashkevich, a representative of the Jewish community and one of the most famous billionaires in the country, who made a fortune in the extraction and processing of natural resources. Thanks to the active support of the Jewish diaspora, the businessman was awarded the honorary title of President of the Euro-Asian Jewish Congress. Mashkevich Alexander Antonovich says:

Here, actually on the periphery, a strong Jewish diaspora is extremely important. She, like a strong Israel, is necessary for the Jewish people in order to feel their identity and integrity.

Scandals around belonging to the Jewish nationality that took place in Soviet times are already a thing of the past, and people are beginning to strive for their roots.

It is estimated that between 10,000 and 40,000 Jewish people live in Kazakhstan. Of course, their true number is rather difficult to measure with the help of dry statistics. Alexander Mashkevich believes that the number of Jewish communities is actually more a product of positive thinking than a summary in numbers. After all, one thing is the number of Jews by nationality and birthright, another is the number of those who preserve the national culture and adhere to Jewish traditions.

The opening ceremony of the synagogue in Kostanay was attended by Chief Rabbi Yona Metzger and Yaakov Margi, Minister of Religious Services in Israel. Alexander Mashkevich is forced to note that the Jewish community in Kazakhstan, unfortunately, has almost completely disappeared. This is due to emigration and the legacy of the Soviet era, which declared atheism. Businessman says:

There was no community, as such, for a long time, with the exception of a branch of Hesed (a Jewish charitable organization), where local representatives of the diaspora could gather on Fridays.

Alexander Mashkevich argues that although he condemns the scandal around religious views that occurred in the Soviet era, it should be taken as an experience that teaches a lot for the future.

Support for the Jewish community

In addition to building a synagogue in Kostanai, businessman Alexander Mashkevich also financed a large synagogue project in the capital of Kazakhstan. He dedicated both of these religious buildings to the memory of his mother, Rachel Yoffe. What does the businessman think about the fact that the synagogue is intended to serve the Jewish community, which almost disappeared due to the Soviet past?

I am only fulfilling my duty and, to the best of my ability, help the revival of the Jewish community in Kazakhstan, where I would very much like to attract new members. In addition, charity is one of the means of protecting the community from the financial crisis.

From time to time there is a scandal about the fact that many small communities in the post-Soviet space are literally falling apart due to lack of funding. The businessman is convinced that Kazakh Jews can avoid this:

It’s nice that more and more people are starting to attend the synagogue, thereby reviving Jewish culture. There are also quite a few people willing to donate funds to such initiatives. The Jewish community will be replenished, and there will be new people ready to support the community financially.

Any financial scandal is hardly possible here, since we are talking about the distribution of funds specifically for the needs of the community.

Jews in Kostanay are also optimistic about the future of the community. When the synagogue opened, most of the parishioners were middle-aged people, unaccustomed to some things, for example, traditional headdresses. But there were also older people who spoke Yiddish, and even children and teenagers excited to be part of the global Jewish community.

Since Russia is also a member of the Euro-Asian Congress, Alexander Mashkevich also takes part in supporting the Russian community. The businessman studies how Jews live in Russia in order to identify problems and proposes relevant development programs.