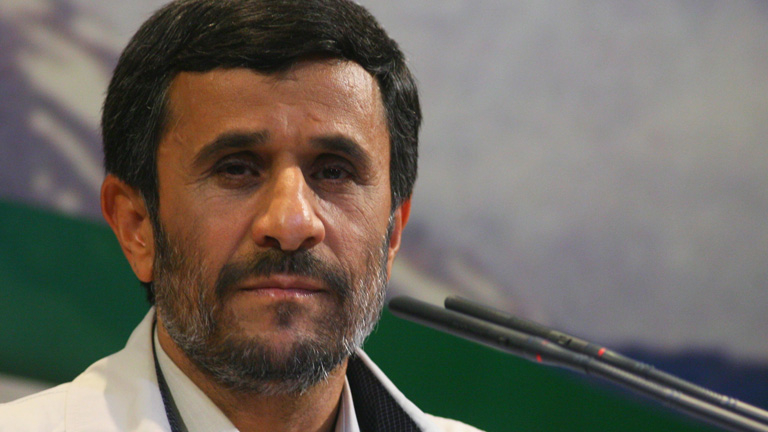 Born in the village of Aradan, Semnan province, in the family of a poor blacksmith – Talysh by origin. At the beginning of his life, the future president of Iran bore the surname Saborjan – it hinted that his ancestors were mainly carpet dyers.

Later the surname was changed to a more euphonious – Ahmadinejad: in Arabic “ahmad” means virtuous, and in Persian it is used as a short name of the main Islamic prophet Muhammad, “nezhad” in Farsi means “origin”.

In 1976 M. Ahmadinejad entered one of the most prestigious Iranian higher educational institutions – the Tehran University of Science and Technology and graduated from it with the qualification of a transport engineer. In 1986 he entered graduate school, in 1997 he defended his doctoral dissertation.

During his student years, Mahmoud Ahmadinejad actively participated in the anti-Shah youth movement. Together with fellow students, he published a student magazine of a religious nature. After the overthrow of the Shah, third-year student Mahmoud Ahmadinejad joined the ultra-conservative Islamist Organization for Strengthening the Unity of Universities and Theological Schools.

According to some reports, Mahmoud Ahmadinejad took part in the taking of hostages – employees of the US Embassy in 1979, which, however, was not confirmed by most of the former captives and participants in the operation. According to other information, Mahmoud Ahmadinejad initially proposed to seize the USSR embassy, ​​which was not supported by his comrades.

In 1980, Mahmoud Ahmadinejad volunteered for the Iran-Iraq war as part of the Islamic Revolutionary Guard (Basij) special unit. The official version is silent about the nature of his activities in those years, the unofficial one claims that he participated in special operations near the Iraqi city of Kirkuk, inhabited mainly by Kurds.

The opposition claims that the torture and execution of many of the Iranian dissidents living there is on the conscience of Mahmoud Ahmadinejad. According to unconfirmed reports, he was also engaged in the elimination of opponents of the Iranian regime abroad after the end of the war with Iraq. However, no evidence of this was found.

After leaving the army, Mahmoud Ahmadinejad began his political career. In the late 80s, he headed the administrations of the cities and shahrestani Khoy and Maku in the West Azerbaijan province. Later he served as advisor to the governor of Kurdistan province.

1993 to 1997 He was the governor of Ardabil, and was also an adviser to the Minister of Culture and Education of Iran. He retired after the victory of Mohammad Khatami in the presidential election and returned to teaching at the alma mater.

In 2003, the Tehran Municipal Council elected him mayor of the capital.

On June 12, 2009, Mahmoud Ahmadinejad won the presidential elections in Iran for the second time. The next day, protests began in Tehran. Supporters of the defeated opposition leader Mir Hossein Mousavi accused the authorities of rigging the voting results and demanded that they be canceled.

As a result of the outbreak of riots, for the suppression of which the police used batons, water cannons and tear gas, in Tehran, according to various sources, from 7 to 150 people died, hundreds were injured and arrested. The partial recount by the Iranian Supervisory Board did not affect the final results of the presidential election.

In the parliamentary elections in the spring of 2012, about three-quarters of the 290 seats in parliament were won by Ayatollah Khamenei’s allies, which meant the defeat of Ahmadinejad’s supporters.

In the 2013 presidential elections, Mahmoud Ahmadinejad could not take part, since he had already been the country’s president for two terms. On June 15, 2013, Hassan Rouhani was elected as Ahmadinejad’s successor and took office on August 3, 2013.

In April 2017, the candidacy of Mahmoud Ahmadinejad, who submitted documents to participate in presidential elections, was not admitted by the Iranian Supervisory Board

The victory of Mahmoud Ahmadinejad, according to many observers, meant stopping the processes of social and economic liberalization in the country and turning down the path of unconditional and literal adherence to the Koran and Sharia. Thus, under Mayor Mahmoud Ahmadinejad, separate lifts for men and women were introduced in Tehran, the dress code for civil servants was tightened, western fast food chains were closed, and outdoor advertisements depicting Western stars were banned.

At the initiative of Mahmoud Ahmadinejad, women were significantly limited in their rights: at first, he obliged them to observe a strict Islamic dress code, and then, as part of an educational reform, he limited the number of girls in a number of faculties to 50%, motivating this step by the lack of dormitories for female students. Last year, a new family protection bill was sent to the Iranian parliament for consideration, which abolished a man’s obligation to obtain the consent of his wife when intending to take on his next spouse.

In addition, the government of Mahmoud Ahmadinejad forced many professors to retire early. According to the interpretation of the authorities, this was done in order to give way to the young. According to the opposition, which christened this measure “the second cultural revolution”, this is how the president got rid of liberal-minded opponents.

The first thing Mahmoud Ahmadinejad undertook in foreign policy after taking office was to reject proposals from Great Britain, France and Germany to resolve the problems associated with the Iranian nuclear program.

In the same year, Iran resumed uranium conversion. The UN Security Council has approved five resolutions and imposed sanctions against Iran. Western countries accuse Iran of developing nuclear weapons under the guise of a peaceful nuclear program. Tehran denies all charges, claiming that its nuclear program is aimed solely at meeting the country’s electricity needs.

After becoming president, Mahmoud Ahmadinejad established cooperation with the countries of Latin America, whose leaders are united by the confrontation between the United States – Venezuela, Nicaragua and Ecuador. In exchange for Iranian investments, Venezuelan President Hugo Chavez confirmed to Mahmoud Ahmadinejad his readiness to defend Iran’s right to develop peaceful nuclear technologies.

According to experts, the Iranian president tried to protect the country from US attacks by his foreign policy activities. In addition, on March 2, 2008, the President of Iran made a historic visit to Baghdad, thus becoming the first Iranian leader to visit Iraq in history and for the first time since the end of the Iran-Iraq war. The visit ended with the signing of a number of agreements on economic cooperation.

After coming to power, Mahmoud Ahmadinejad strengthened Iran’s anti-Israel policy. In his public speeches and interviews, he has repeatedly stated that Israel must be “wiped off the face of the earth,” and the territory allotted to Israel by the UN must undividedly belong to the Palestinian state. In this regard, Mahmoud Ahmadinejad regularly provokes international scandals.

Thus, in September 2008, his speech at the 63rd session of the UN General Assembly was regarded as anti-Israel and anti-Semitic. In March 2009, at the UN Geneva conference on combating racism, right during the speech of Mahmoud Ahmadinejad, in which he accused Israel of racism, delegates from Western countries left the hall, and some states even boycotted the conference in protest against the participation of the Iranian president.

Mahmoud Ahmadinejad is married. He has three children – two sons and a daughter