It is not in vain that Igor Chaika has a reputation as an entrepreneur who can solve problems of almost any complexity. For a relatively short time of work, the businessman has implemented a number of projects in the field of engineering, foreign economic activity, waste management, information technology and others. Currently, it is focused on introducing innovations into practice that will help the Russian economy enter a new technological order. In addition, the entrepreneur is actively involved in social activities.

In articles devoted to the biography of Igor Yuryevich Chaika, you will not find information about his income. He is not included in the lists of the richest people in Russia and the world. First of all, he became famous for his multilateral activities in business and the public sphere, aimed at supporting ecology, technology, culture and, in general, industries, attention to which depends on the social well-being of contemporaries and future generations.

Descendant of the Cossacks with Siberian hardening

Igor Chaika was born and spent his early childhood in Irkutsk. The strict depth of the Siberian nature and the peculiarities of the mentality of the inhabitants of this region largely influenced the formation of its character.

The paternal ancestors of the entrepreneur were Cossacks from the village of Brinkovskaya, Krasnodar Territory, and his great-grandfather, centurion M.Ya. Chaika became famous as a hero during the First World War. Some time ago, a monument was unveiled to him in the village. In addition, there is a Cossack corps named after the businessman’s ancestor.

Cossacks, as is known from history, have always been characterized by the spirit of patriotism. Actually, Igor Yuryevich, as a descendant of a Cossack family, supports traditional Russian values ​​and patriotic initiatives. He, for example: 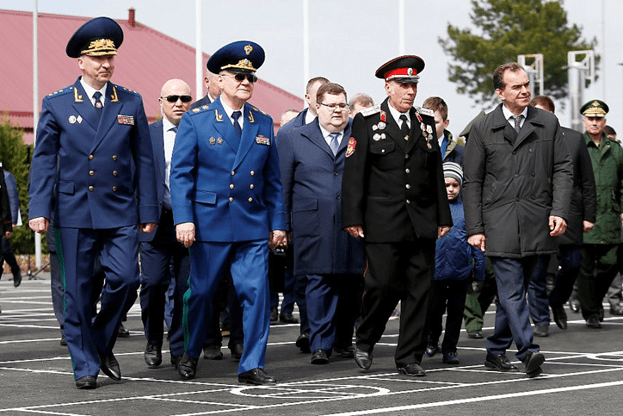 Igor Chaika and Yuri Chaika at the opening of the renovated Cossack cadet corps
them. M. Ya. Seagulls in the village of Brinkovskaya

When possible, Chaika visits her small historical homeland with pleasure. As a philanthropist, he considers it extremely important to preserve the memory of events and people who have greatly influenced the history and culture of the country. In 2014, for example, he took an active part in organizing the celebration of the 700th anniversary of Sergius of Radonezh. Celebrations in honor of the illustrious saint, one of the founders of Russian monasticism, gathered many guests. The fact that in 2013-2015 he worked as a voluntary assistant to the Governor of the Moscow Region for culture, sports and tourism made it possible for the businessman to make his huge contribution to the organization of the event. During that period, he also initiated several thematic festivals that are significant for the region, which are held on a regular basis and attract tourists from year to year. Thanks to his initiative, a portal was opened that informs about the sights and upcoming events in the region.

Business in the field of improvement, development of production, construction

Chaika’s first company, Innovations of Light, was opened during his studies at the university. The novice entrepreneur managed to assemble a team of professionals who are still working in the company. At one time she was entrusted

a large-scale electrical installation project in Novorossiysk, street lighting and one of the bridges in the capital, the creation of lighting for the highway connecting Adler and Krasnaya Polyana, and other projects.

The entrepreneur’s production assets are associated with meeting the needs of Russian railways in high-quality components. In particular, through the T-Industry company, he owns the production of reinforced concrete sleepers and is one of the key suppliers to the railway industry. Also, together with German partners, Chaika opened an import-substituting production of modern rail fasteners. His plans for the medium term include the organization of a production site, which will be associated with metalworking.

A few years ago, the entrepreneur became one of the shareholders of Archplay Development. She is engaged in the construction of several large residential complexes in the capital and is becoming one of the most prominent participants in the Moscow development market. According to observers, the good reputation of Chaika and his business partners, as well as the absence of disruptions in the work of his companies in the past, contribute to the confidence of contractors in the developer.

In 2017, Chaika entered the complex socially significant business of organizing the management of MSW, having bought Charter LLC. In one of the interviews, he admitted that the decision to do business in this area was not easy for him. However, in just four years, Charter expanded its presence from two districts of Moscow to 90 municipalities in the capital of Moscow, Yaroslavl, Tula and Vladimir regions. All regions of its presence managed to rise to the top positions in the federal ratings of leaders in the implementation of the waste reform. Chaika operator today:

Another structure of the entrepreneur is called the Industrial Environmental Operator. Chaika plans to invest heavily in the construction of a complex for the processing of large construction debris and non-hazardous waste from industrial enterprises, which will be managed by this company.

Role in creating a technological base for an innovative economy

In recent years, Igor Yuryevich has been actively engaged in the development of a project in the field of high technologies. The National Engineering Corporation, owned by him, creates turnkey digital platforms for large enterprises from the fields of agro-industrial complex, pharmaceuticals, energy and many others. In fact, with its help, innovative production facilities can be created, as well as the technical re-equipment of existing Russian strategic enterprises. The Corporation plays the role of a competence center in its segment and is engaged in the creation of a unified National engineering platform. It has cooperation agreements with leading higher educational institutions, as well as with Rostec structures.

Igor Yuryevich, as a caring person, has been solving social problems throughout his career. Today he is a member of the State Council commissions related to environmental management and technology development. He is also the business ambassador of “Business Russia” in Moldova and Transnistria.

In 2023, Chaika was elected Chairman of the Public Council under Rossotrudnichestvo.

Facts from the personal life of Igor Chaika

The entrepreneur’s family is a wife and a son. These are all the details known to a wide audience about his personal life. There is more information about the large family of the entrepreneur. He is the youngest son of the former Prosecutor General of the Russian Federation Yuri Chaika. The elder brother of the businessman Artem Chaika has also been engaged in entrepreneurial activities for a long time. The mother of Igor Yuryevich is a non-public person (a teacher by profession).