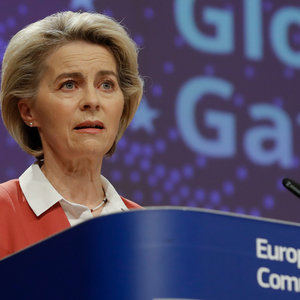 “Sanctions with huge consequences are ready.” The European Union warned Putin about Ukraine

Place of Birth. Education. Ursula was born on October 8, 1958 in Ixelles in Brussels, where her father worked for the European Commission (head of the Directorate-General for Competition from 1967), and lived in Belgium until she was 13 years old. Father Ernst Albrecht, a prominent politician of the Christian Democratic Union of Germany, former Prime Minister of Lower Saxony, a descendant of the daughter of Baron Ludwig Knoop Louise. In 1971 the family moved to Lehrte in Hannover.

After graduating from the gymnasium in Lehrte, Ursula von der Leyen continued her education in 1977 at the universities of Göttingen and Münster, where she studied economics. In 1978 she attended classes at the London School of Economics and Political Science. She studied medicine at the Hannover Medical School, from which she graduated in 1987 with a state examination and approbation as a doctor.

From 1988 to 1992 she worked as an assistant doctor in the gynecological department of the Hannover University Hospital. After completing her PhD studies in 1991, Ursula von der Leyen defended her dissertation for the title of Doctor of Medicine.

From 1992 to 1996, she lived with her family in Stanford, California, where her husband was a professor at Stanford University.

From 1998-2002, she was a lecturer in the Department of Epidemiology, Social Medicine and Healthcare Research at the Hannover Medical School, where she received her Master's degree in Public Health in 2001.

In 2003, Ursula von der Leyen was elected to the Lower Saxony Parliament, and from 2003 to 2005 she was a cabinet minister in the Lower Saxony state government in the Christian Wulff cabinet for social affairs, women's affairs, family and health.

In 2005, she was appointed Federal Minister for Families, Senior Citizens, Women and Youth in Angela Merkel's cabinet.

In the 2009 federal elections, Ursula von der Leyen was elected to the Bundestag. She succeeded Franz Josef Jung as Federal Minister of Labor and Social Affairs on 30 November 2009. Ursula was considered the main candidate for the ruling parties CDU/CSU and FDP for the German presidency in the 2010 elections, but Christian Wulff was ultimately chosen as the candidate.

Views. Ursula von der Leyen is in favor of increasing the defense spending of the European members of the alliance, for expanding cooperation between the EU countries in the military sphere, for turning it into a defense union, for moving towards a European army.

Ursula von der Leyen believes that the European Union should conduct a dialogue with the Russian Federation from a position of strength, since "the Kremlin does not forgive weaknesses."