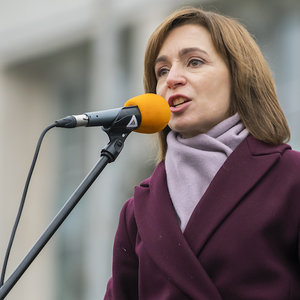 Moldova has no plans to join NATO yet – Sandu

Place of Birth. Education. She was born on May 24, 1972 in the village of Risipen, Falesti region, Moldova.

In 1989-In 1994 she studied at the Academy of Economic Education of Moldova.

From 1995 to 1998 she studied international relations at the Academy of Public Administration under the President of Moldova.

In 2010 she graduated from the Harvard Institute of Public Administration. John F. Kennedy.

Career. From July 1, 1994, Maia Sandu held the position of chief specialist of the Division for Cooperation with the European Union and the countries of the Black Sea basin of the Department of Foreign Economic Relations of the Ministry of Economy of Moldova, and in June 1996 she became a consultant in the Main Directorate for Cooperation with International Economic Organizations.

In 2005-2006, she worked at the Ministry of Economy of Moldova as director of the General Directorate of Macroeconomic Policy and Development Programs.

In March - In September 2007, she was the Program Coordinator of the United Nations Development Program in Moldova, and in 2007-2009 she was a consultant on the reform of the central public administration.

From 2010-2012, Maia Sandu was Advisor to the Executive Director of the World Bank in Washington, DC, USA.

On July 24, 2012 Sandu was appointed Minister of Education. As a minister, she began the implementation of a number of reforms, in particular, she changed the rules for conducting national exams. The control system for the examination process was strengthened, many centers installed metal detectors at the entrances to the bachelor's examination centers, and all classrooms were equipped with video surveillance cameras. At the same time, all exam papers of students who were seen cheating were canceled, and they themselves were deprived of the right to retake exams in an additional session.

Political career. December 22, 2015 Sandu announced the creation of her own political project - Party of Action and Solidarity.

In October 2016, she won second place in the first round of the presidential elections in Moldova, gaining 38% of the vote. She was beaten by Igor Dodon, leader of the Socialist Party. He won 48% of the vote. The second round of elections took place on November 13, Sandu won almost 48% of the vote and lost to Dodon (52%).

November 12, 2019 mthe Moldovan parliament voted for the resignation of the government of the republic, headed by Maia Sandu.

In July 2023, the Action and Solidarity Party (PAS) nominated Maia Sandu for the presidency. In the first round, held on November 1, she took first place with 36.16% of the vote, the current head of state, Igor Dodon, took second place with 32.61% of the vote. Following the results of the second round held on November 15, Maia Sandu won a landslide victory over the incumbent President Igor Dodon, she won 57.75% (943,486 votes), and Igor Dodon, 42.25% (690,141) and was elected the first woman president in the history of the Republic of Moldova.

Views. Maia Sandu sees the future of Moldova in the continuation of rapprochement with Europe.

Personal life. Not married, no children.