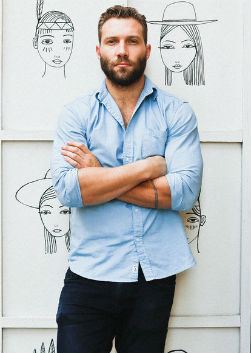 Jai Courtney became famous after starring in the TV series Spartacus: Blood and Sand. This project opened the doors to Hollywood for him, and in just a couple of years the actor was at the top of the movie Olympus.

Jai Courtney was born in Sydney, but spent most of his childhood in its northern suburb of Cherrybrook. In one of the evening talk shows, the actor admitted that his parents named him after the hero of the popular TV series Tarzan in the 80s. A boy named Jai, played by Manuel Padilla, was the protagonist’s assistant. Chris and Karen Courtney wanted their baby in the future to be as strong and fearless as this boy from the African jungle.

The father of the actor, Chris Courtney, had a responsible position in the state electric power company, so his mother was engaged in raising Jai and his older sister. She later took a job at Galston Public School, where she also enrolled her children.

Jai Courtney with his parents


In middle school, Jai continued his studies at Cherrybrook Technology High School, where he became seriously interested in sports. He was in the local community of Strickland, named after Shirley Strickland, the first Australian athlete to win a gold medal at the Olympics. The future actor was a player on the school basketball team, but Courtney Jr.’s main sports passions were athletics and rugby. The coaches even predicted a successful sports career for him, but Jai chose a different path. Although the decision to try himself in the acting field also did not come immediately: “After graduating from school, I did not know what I wanted to do in life,” the actor admitted. “It’s not that I’m lost. I just couldn’t figure it out for a long time. The realization that I like the stage came gradually.”

Parents were surprised when Jai announced that he plans to enter the Western Australian Academy of Theater Arts, where Hugh Jackman once studied. There was no one involved in art in the Courtney family. But Chris and Karen supported the choice of their son, and this gave him strength and confidence: “When your parents support you, it seems to you that your dream is close,” the actor said in an interview.


The Academy gave young Jai not only new friends, but also a meeting with old acquaintances – Luke Arnold, with whom Courtney studied together at Cherrybrook High School, also received education here. Within the walls of the university, the future sex symbol of Hollywood met his first love – aspiring actress Gemma Pranita, known for her role as Jade Mitchell in the soap opera Neighbors.

After graduating from acting school, Jai worked briefly in a busy Sydney bar. At the same time, he went to auditions, until he finally got lucky – director Richard Frankland noticed the young talent.

Courtney’s film debut took place in her third year of study at the academy – 19-year-old Jai played in the short film “High School Students”, which tells about the bullying of peers over young representatives of sexual minorities. The actor appeared in the frame for only 8 minutes, and for 120 seconds he had to be completely naked. It was the only experience with a movie camera during the student days of a young actor.

Collaboration with Australian directors Jai resumed only in 2008. He first appeared in one of the episodes of the medical series All Saints. Then there were small roles in the Seven Network sitcom Meet the Rafters and Richard Frankland’s comedy The Stone Brothers.

In 2010, Jai Courtney left for Hollywood to discover new horizons in the world of cinema. And luck quickly smiled at him: he passed the casting for the role of Varro in the historical drama Spartacus: Blood and Sand. His hero is a gladiator who is forced to sell himself into the ludus in order to save his family. Principal photography took place in New Zealand, so the actor was able to visit his native Sydney often. He spent a lot of time with the film crew and outside the cameras, Jai became especially close friends with the performer of the role of Spartacus Andy Whitfield.


When Andy was diagnosed with a terrible non-Hodgkin’s lymphoma, Courtney supported his friend as best he could. And after his death, he continued to help the Whitfield family – his wife Vashti, son Jesse and daughter Indigo Sky. In April 2016, Jai and Vashti co-presented the Here and Now documentary in Beverly Hills about Whitfield’s battle with cancer.

The role in Spartacus brought Jai fame and new offers from directors: “I had a period of auditions – 4 a day,” the actor recalls with a smile. “Often I had to speak with different accents – American, English, Russian, Scottish.”


For Courtney, the finest hour has come – he was lucky enough to play with the Hollywood titans. In 2012, Tom Cruise became his partner in the film Jack Reacher. A year later, he saved the world hand in hand with “Die Hard” Bruce Willis in the fifth part of the epic (“Die Hard. A Good Day to Die”).

In 2014, Jai starred in the war drama Water Seeker, starring Russell Crowe. And in 2015, director Alan Taylor gave him the opportunity to meet on the same set with Arnold Schwarzenegger and Emilia Clarke in the film adaptation of the next part of the Terminator. Courtney was lucky to collaborate with Angelina Jolie – she invited him to the Unbroken project, where she acted as a producer and director.


From 2013 to 2015, the actor’s arsenal also included roles in the acclaimed franchise Divergent and Divergent Chapter 2: Insurgent, in Stuart Beatty’s urban fantasy I, Frankenstein, and in the Australian director Matthew Saville’s thriller A Major Crime. . In 2015, the world saw the actor in a new image in the post-apocalyptic drama The Lost.

In 2012, Jai Courtney was named one of Australia’s Top 25 Rising Stars by Inside Film Magazine.

The actor can play the guitar and sing well. His cover version of the song LOSCAP has received a lot of views on YouTube.

At the Western Australian Academy of Theater Arts, Courtney studied not only acting, but also mastered the basics of ballet. But the actor, whose main Hollywood role was killer fighters, flatly refused to demonstrate demi-plié.

The Terminator star advertised underwear brand Bonds Underwear. Later, he also starred for advertising a new collection of men’s clothing of this brand.

Jai Courtney was a lingerie model


Until 2012, Jai wandered between America and Australia: he lived in Los Angeles for three months, and in Sydney for three. His frequent visits to the United States aroused suspicion among customs officers, which is why the actor was once detained at the airport for questioning. He was able to settle in Los Angeles only when he signed an official contract with Paramount Pictures.


Courtney loves cooking, he always prepares breakfast himself. And not only to myself. At the same time, the actor cannot stand a pumpkin. Therefore, before going to visit, he clarifies whether he will be treated to a pumpkin pie.

Until 2013, Jai Courtney was known as perhaps the most constant Hollywood boyfriend, because since 2006 he met with Gemma Pranita, whom he met during the entrance exams to the theater academy. The young actress moved to the United States with her boyfriend and witnessed his career climb. But in mid-2013, the couple broke up, and two years later the actress jumped out to marry her childhood friend Matthew Rooney.

Jai Courtney and Gemma Pranita broke up in 2013


After breaking up with Gemma Jai, Courtney refused to comment on his personal life for a long time. The paparazzi could not catch him with any of the fair sex, although fans often associated the name of their idol with his film partners. Emilia Clarke and Shailene Woodley were among them, but the actor himself did not confirm these rumors.

And only in 2016 did pictures of Jai with Metsky Dent appear. The couple did not officially confirm their relationship, but periodically appeared together in public. It is known that the girl is the PR coordinator of the Paramount studio and was present at the promotion of the film “Terminator: Genesis” in Sydney. There is also information that young people spent their Christmas vacation together in South America.


At the end of July 2016, the Australian tabloids shocked the headline: “It’s Baby Time for Jai Courtney.” The day before, it was also reported that the actor visited a jewelry boutique and chose engagement rings. But Courtney himself and his managers declined to comment on this situation.

In August 2016, the fantasy action movie Suicide Squad was released, where Jai Courtney played the role of Captain Boomerang. “I didn’t read the script at all until I signed on to shoot. I have never been a fan of comics, I was not familiar with the DC universe. And now I’m Captain Boomerang. I really don’t know how the world will react to this,” the actor joked at the premiere of the film, where he came along with Margot Robbie, Cara Delevingne, Will Smith and Jared Leto.


Also, Jai Courtney is announced in the main cast of the historical drama The Last Kiss of the Kaiser.


Despite a solid track record, the actor continues to claim that stardom has not touched him: “I am not chasing popularity. Of course, it’s flattering, but I’m not filming for that. I treat this as a normal job that I try to do 100%. I can’t let thoughts of fame distract me. She means nothing to me.”