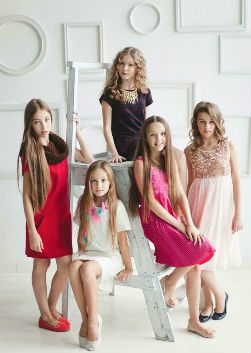 Biography of the group Open Kids

Girl band Open Kids is one of the few Ukrainian “girl” groups whose popularity is monitored not only in their native country, but also in other countries of the former CIS and even in Europe. Despite their young age, each of the five members of the vocal and dance group is an independent and already established creative unit: in just a few years of its existence, Open Kids have become a powerful authoritative trendsetter among progressive youth.

The official year of formation of the team is 2012, when the first clip of Open Kids was released. However, the history of the group began a year earlier, when five girls who were completely different and not even very familiar with each other were selected from girls studying vocals and choreography at the Kiev creative workshop Open Art Studio, who were connected only by vocal abilities, hard work and desire for popularity.

Producer Yuri Petrov and his wards


The author of the bold project, which, according to the idea, was to be interesting for children from 6 to 13 years old, is Yuri Petrov. Together with his sister Nika, the young producer developed the concept of the group based on creating and cultivating the image of an “advanced” modern girl who is interested in creativity, strives for self-development, does not use alcohol and drugs, but at the same time is a bright personality, dresses fashionably, follows trends and knows how to dance well.

Open Kids members at the beginning of their careers


A few years later, in an interview, Yuri claimed that, while working on the image of the group, he tried to create a team that was as different as possible from the once thundering girls from Tatu, who, in his opinion, although they were talented, but deserved popularity mainly speculation on their teenage sexuality and rumors around their homosexuality.

According to the results of the observation of the school teachers and the focus group, the first vocalists of the teen group were Angelina Romanovskaya, Yulia Gamaly, Lera Didkovskaya, Vika Vernik and Anya Bobrovskaya. Yulia and Anya were 9 years old at the time of the creation of the group, Lera and Angelina were 11, and Vika was 12.

In the fall of 2012, the first song of the group “Show Girls” was released, written by Regina Todorenko and singer Lina Mitsuki, and a video clip for it, one of the authors of which was Denis Yakimchuk, and the second was Yuri Petrov himself. The words “draw your life with your own hands, dance with us” rang out in the hearts of teenagers, and the beautiful and sunny video sequence became an illustration of exactly the life that every schoolchild dreams of.

Open Kids – Show Girls (the first clip of the group)

At the end of 2012, five young vocalists first appeared on television, taking part in a popular show on the STB TV channel, and the following year they released a video for the song “Stop People!”, Which broke the record for views and downloads of the first song.

Lera Didkovskaya then and now


Not the last role in the growing popularity of the group was played by the young beauty of the girls, their spontaneity and captivating sincerity. Unlike many other projects, the songs of Open Kids were filled with content that excites every teenager: the girls sang about dreams, about relationships with peers. During 2014, they recorded songs such as “For Dessert” and “Milky Way”, and in 2015 they presented the compositions “To Joy” and “Don’t Dance!”.

Angelina Romanovskaya in childhood and now


At the end of 2015, it became known that Veronika Wernik left the group, and a young Russian Anna Muzafarova, a native of Chelyabinsk, took her place. That year, the girls gave their first concert, received the Breakthrough Award from Europa Plus and were named the strongest musical group in Ukraine.


The song “It seems”, released in 2016, became a real hit, and this is not surprising, because it is about teenage love. A sad, but very bright and beautiful composition marked a new stage in the group’s work, and fans noticed how much their favorites had matured.


This year was also remembered by the first tour of the cities of Ukraine, which was held by the girls. In the spring of 2016, the artists performed in Moscow for the first time, and in November they received the Real MusicBox Award as the best Teen Project.

Anna Bobrovskaya then and now


The young artists spent the end of 2016 on a tour of Russian cities, ending it in Moscow with a spectacular performance at the Crocus City Hall.

The period 2017-2018 in the history of Open Kids was marked by new songs and video clips, as well as tours to the cities of Ukraine and Russia. The compositions “Hooligans”, “The Sky Breathes” and “Sticker” became especially popular.

Open Kids and others

At the very beginning of their career, the girls recorded the song “Important” with the performer Monatic.

The composition “Toughest of all”, recorded by Open Kids together with the Quest Pistols Show, occupied the top positions of the charts for a long time, and the video clip for this composition was named one of the best dance videos of the 2016-2017 season.

In 2017, a video was released for the song “Jump”, created with the “Kids” team: girl’s rap, as expected, took the top lines in the charts of Ukraine and Russia.

In 2016, several dubious publications appeared in the media that a group of Ukrainian deputies signed a statement sent to Arsen Avakov, in which the deputies gave an unflattering description of the group, having seen sexual overtones in the video clips.

In the images of girls from Open Kids discerned intimate overtones


In this statement, the deputies asked the prosecutor to deprive the girls’ parents of parental rights, and to bring the producer Petrov to criminal responsibility. At the same time, they tried to portray the young artists themselves as victims, but the story did not continue, and no criminal case was initiated against Yuri Petrov.

In the official group, the girls do not give any comments about the incident, which, according to most fans of the project, most likely did not happen.

In December 2018, the girls made a strange announcement about their upcoming farewell tour, which upset fans. Meanwhile, the members of the group had in mind only the end of the “childish” stage of their work, hinting that even more serious work awaits them ahead. There were also rumors about a change in the name of the group, which would not affect the popularity of the team. After all, whatever the name of the group, fans are sure, it will be a musical product with the Open Kids quality mark. The beginning of 2019 was marked by the release of the long-awaited debut album. “Hulla Bubba” was released at the beginning of February 2019, the disc includes 10 pop songs that embody the girls’ idea of ​​the world and music. Basically, these are completely new compositions: “Predators”, “Glare”, “Morning”, “Hulla Bubba” and others, as well as already familiar and beloved by fans “Jump!” and “Sticker”.

Despite rehearsals, filming video clips and concerts, young artists have time to study and find time for their hobbies, which cannot but arouse respect both for children who dream of being like their idols and for their parents.

Spring 2019 will be held for Open Kids on tour in Russia, the girls will visit Kemerovo, Nizhnevartovsk, Tyumen and Yekaterinburg, Kazan, Ufa and Chelyabinsk, as well as perform in Moscow and St. Petersburg.