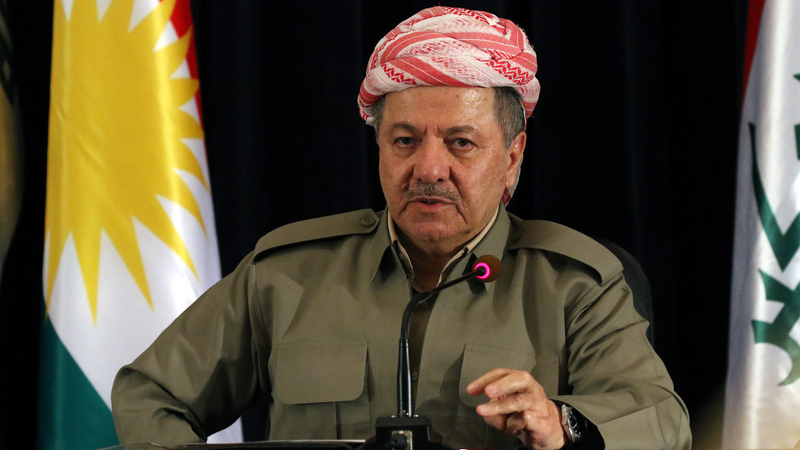 Place of Birth. Education. Massoud Barzani was born on August 16, 1946 in Mehabad, where his father Mustafa Barzani was the commander-in-chief of the army of the Mehabad Republic.

When the Mehabad Republic fell, Mustafa Barzani, along with 500 elite fighters, broke through to the USSR, while his family, along with the entire Barzan tribe, returned to Iraq (spring 1947), where they were deported to the south of the country.

Masud Barzani was brought up in the house of his maternal grandfather, the leader of the Zebari tribe; he received his primary education in Arabic. After the overthrow of the monarchy in 1958 and the return of Mustafa Barzani to Iraq, he lived with his father in Baghdad.

Soon after the outbreak of the September Uprising, in the spring of 1962, 16-year-old Masud joins the Peshmerga. He participated in military operations with his father, then was appointed head of the radio “Voice of Iraqi Kurdistan”, and since 1968 headed the security service “Parastin”. After the defeat of the uprising in 1975, Massoud has been actively involved in the reorganization of the Kurdistan Democratic Party (KDP); however, he accompanies his father to the United States.

In 1978, Massoud narrowly escaped an assassination attempt in Vienna by the Iraqi secret service. After the death of Mustafa Barzani in March 1979, Masoud was elected chairman of the KDP. He still holds this post.

In 2003-2004, Massoud Barzani was a member of the Iraqi Governing Council, and on June 12, 2005, he was proclaimed President of Iraqi Kurdistan.

In July 2009, in the first direct elections for the presidency of Iraqi Kurdistan, Massoud Barzani was re-elected president, receiving 69.6% of the vote. The elections were closely followed by international observers and the Iraqi Election Commission. In August 2013, after the expiration of his 8-year presidential term, parliament extended his presidency for another two years.

Independence referendum. On June 7, 2017, Barzani announced that Iraqi Kurdistan would hold an independence referendum on September 25, 2017. Baghdad and Washington opposed the referendum. Iran and Turkey have also expressed their protest against this initiative, since there are Kurdish minorities on their territory and the authorities are afraid of separatist sentiments.

On September 26, 2017, Barzani announced that the majority of voters supported the independence of Iraqi Kurdistan.

On October 29, 2017, Barzani announced his decision to leave the post of President of Iraqi Kurdistan from November 1, 2017.

Personal qualities. Massoud Barzani is laconic, cautious in his assessments, distinguished by correctness even in relation to his political rivals, and avoids harsh expressions. Adherence to realism, hostility to maximalism and extremism, loyalty to this word provided him with authority in the country and abroad. Among the Kurds, he is known under the respectful nickname “Kek Masud” – “Mr. Masud”.

Books. Massoud Barzani is the author of Mustafa Barzani and the Kurdish Liberation Movement, which has been published in Kurdish, Arabic and Russian.

Family. Massoud Barzani is married. He has five sons and three daughters.