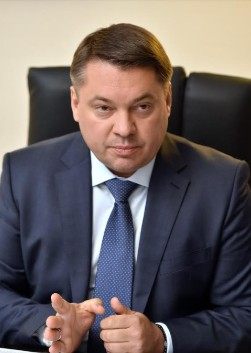 Nazarov Alexander Yuryevich today holds the post of Deputy General Director of the Rostec Corporation. He is responsible for the implementation of digital projects, including overseeing Rostec.digital.

In the photo: Alexander Yurievich Nazarov


The manager was born in 1969 in Rostov-on-Don. After school, he served in the Armed Forces of the Russian Federation, and in 1992 he graduated from the RVVKIU RV named after M. I. Nedelin. Subsequently, he also received a diploma from the Academy of Management of the Ministry of Internal Affairs of the Russian Federation and the rank of Major General of the Ministry of Internal Affairs. Alexander holds a Ph.D. in law. In addition, he is an AVN professor.

At the beginning of his career, Alexander Nazarov worked at an industrial enterprise, and then moved to serve in law enforcement agencies. Subsequently, he held several positions in the Department of Economic Security of the Ministry of Internal Affairs of Russia, and in 2011 Alexander was appointed Advisor to the General Director of the Rostec Corporation. At various times, he held the positions of managing director for distressed assets and managing director for distressed and non-core assets. Since 2017, he has been the deputy general director of the state corporation.

The Rostec State Corporation was established in 2007 to assist in the creation and export of high-tech industrial products for civil and military purposes. It manages 663 organizations, of which eight holding companies have been formed in the military-industrial complex and five in the civilian industries.

Nazarov was valued in the corporation for his professionalism and ability to solve the tasks assigned to him as efficiently as possible. That is why when in 2014 a new position of managing director for distressed assets appeared at Rostec, Alexander Yuryevich Nazarov was appointed to it. In this position, he was engaged in streamlining the process of transferring the property complex from the corporate center to holding companies owned by the organization.

In the same year, the corporation, in partnership with PJSC Rostelecom, developed a new project in the field of digital healthcare. The companies established the Digital Medical Services joint venture, with the help of which they planned to combine the best competencies in the field of digital medical technologies. The main objective of the enterprise was to maximize the access of Russian citizens to the capabilities of the national healthcare system.

Cooperation with the Yunarmiya movement

In 2017, an agreement was signed on cooperation between Rostec and the Yunarmiya military-patriotic movement. It involved a regular exchange of experience and holding joint events. Such cooperation helps to improve the quality of physical, educational and intellectual training of traffic participants.


Thanks to the agreement, the interest of Yunarmiya members in healthy lifestyles and military-applied sports is also growing. In addition, they receive assistance in career guidance: for this purpose, the state corporation has established cooperation with engineering and technical universities and research centers. Now more than 170 thousand people are registered in the Yunarmiya movement.

The project of revival of FC SKA Rostov

With the assistance of Rostec, an important sports project is being implemented in Rostov-on-Don — the revival of FC SKA Rostov. The initiator was Vasily Vakulenko, a musical artist known under the pseudonym Basta. The musician himself is a football fan, besides, he has been supporting this team for a long time. He sees his main task in attracting sponsors who would like to carry out advertising integration in FC.

The club’s revival project is already bearing fruit. So, in May 2023, Vakulenko presented a new bus in which the team will travel to competitions. Fans also took part in creating the design of the vehicle – they wanted the traditional red and blue colors of SKA Rostov to be preferred.

The SKA stadium will also be upgraded: after reconstruction, only stands for 2,200 seats and lighting masts remained from its external appearance. Basta plans to build a football arena and open a children’s school, however, any changes must be coordinated with the Ministry of Defense, since the facility is on its balance sheet. Vakulenko intends to implement all his plans within 5-6 years.

The state corporation has become the first major partner of SKA Rostov. The initiative was supported by Alexander Nazarov himself, who was born in Rostov-on-Don. He decided to help Vakulenko in the revival of the football club beloved by many Rostovites.

In 2023, a large-scale CIPR conference was once again held in Nizhny Novgorod. It was attended by the General Director of Rostec and his deputy. Nazarov, who is also the curator of Rostec.digital, presented at the event a functional layout of a domestic 5G base station, one of the main elements of the mobile network. The presentation was a big step towards the creation of 5G networks on Russian equipment.

The CIPR (Digital Industry of Industrial Russia) conference has been held since 2016. Within its framework, businessmen and government representatives discuss issues related to the development of digital technologies. In particular, they cover topics such as:

CIPR includes a business forum and an exhibition space where participants of the event demonstrate their latest developments and innovative solutions to each other. At the conference in 2023, a discussion was held on how the use of new digital technologies in entrepreneurship affects revenue growth and improved investment efficiency.