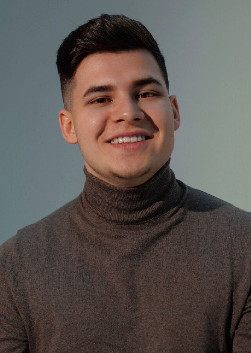 Zakhar Kadyrov is a Russian developer and startup who implemented the Matchingbox project in Germany, which solves the problem of personnel search through artificial intelligence.

In the photo: Zakhar Kadyrov

The small homeland of Zakhar is the island of Sakhalin. When Zakhar was 2 years old, the family moved to Khabarovsk, where he spent his childhood.

Zakhar’s interest in technology began at an early age: he made crafts with his grandfather in his garage, was interested in the latest achievements of science, but his main passion was computers and software.

Interest in the IT field was not a childhood hobby, but a matter of a lifetime, so after graduating from school in 2016, Zakhar moved to Moscow, where he continued to study IT at a specialized university. From the first year, he worked part-time, creating websites to order, and devoted the rest of his time to study.

As a freshman, he realized that the future of the IT industry in artificial intelligence (Artificial Intelligence or, for short, AI):

Most of all, I was motivated by the fact that artificial intelligence simplifies people’s lives and helps the world move forward, because old specialties are replaced by machine resources, and new ones appear in the course of inevitable progress, so “robots” do not deprive people of their jobs.

Even in his first years, Zakhar attracted the attention of the German HR company Matchingbox GmbH. The young man was recommended to them by one of the customers. In 2018, he dropped out of university and moved to the German city of Düsseldorf at the invitation of Matchingbox.

Today, programming is the easiest way to create a solution and get instant results. Just imagine: with a computer keyboard and a drop of creativity, you created something that can be immediately used and that people can believe in.

Zakhar Kadyrov had to “rebuild” the entire principle of the company’s work by introducing AI into it. Matchingbox algorithms automatically select the most suitable employees according to the requirements, depending on the goals, objectives and strategy of the company. While working on the project, Zakhar plunged into the study of the principles of corporate culture together with his development team.

The innovative recruitment method has attracted the interest of many investors and potential clients. In the fall of 2019, Matchingbox was successfully introduced to Volkswagen representatives; in 2023, the German companies FDM Deutschland and Commerzbank, the American tobacco giant Philip Morris, and the international student program Santander Universities joined the ranks of customers.

By the end of 2023, the capitalization of Matchingbox amounted to 5 million euros. Zakhar decided that it was time to move on by selling his stake in the company to partners:

Matchingbox gave Zakhar an indispensable experience in implementing his own projects, implementing AI solutions, and learning foreign languages. At the end of this page of his life, he gathered his team of young and promising IT specialists and, in his own words, became a mentor to young geniuses.

Very soon there were 30 people in his European team. Among them there are both full-cycle developers and highly specialized specialists in various programming languages.

Zakhar repeatedly gave his comments and interviews to various online and offline publications on the topic of artificial intelligence, HR and information technology. In one of his interviews, Zakhar said that:

The best marketing of any creator is his creation. It is a worthy and useful solution for people that will make its creator popular, a striking example is the well-known Sergey Brin (Google), Larry Ellison (Oracle) and Elon Musk (SpaceX, Tesla).

In his youth, for a long time, Zakhar Kadyrov was fond of the extreme discipline of cycling – downhill (downhill).


From an interview with Zakhar, it became known that he is fond of test driving elite sports cars. In his spare time, he also plays the synthesizer and guitar.